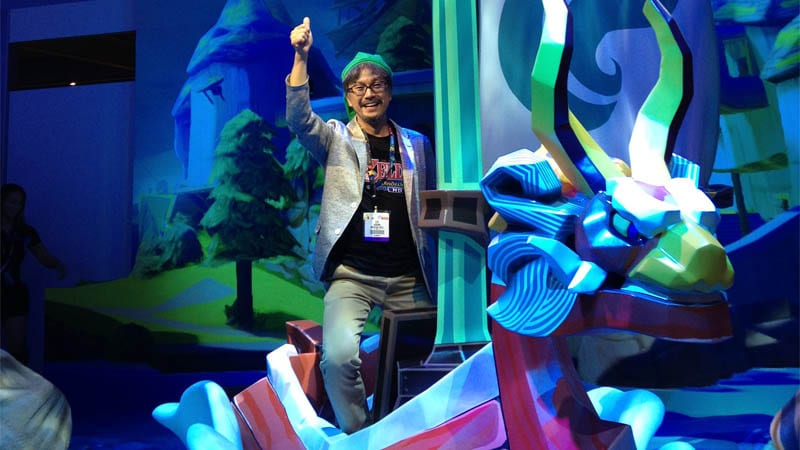 Eiji Aonuma has been doing a series of interviews lately, mostly following the release of Majora’s Mask, Kotaku has gone live with their interview with the Zelda producer. Within the interview they asked him a series of questions about how dungeons are made and even more on Majora’s Mask, includigng the infamous Kafei and Anju sidequest.

You can read some of the interview below:

On how the teams go about making Zelda dungeons…

Well, the first thing that we ask ourselves when we’re designing a new dungeon is what sort of gameplay do we want the player to engage with. And that will help us decide on a kind of theme for that dungeon. For example, are we trying to build a dungeon around puzzle type gameplay, or is action more of a focus? And once we’ve decided on a theme along those lines, we’ll start to think about how a player might use a particular item in that dungeon to interact with the environment. Up until this point all of that is kind of laying out the theory of what kind of dungeon this is going to be and from that point we move on to implementation.

Now, this is sort of like the orthodox version of how to create Zelda dungeons, but I should bring up something that’s really important to us now is that we feel it’s important to challenge the orthodoxy of the Zelda series as we’re creating new games. So while we still need to look for some themes early on, we do want to look at interesting ways to make departures from the rest.

On the creation of dungeons in Majora’s Mask…

Aonuma: The one that really stands out to me of the dungeons is Woodfall. This was right after the development of Ocarina of Time had finished and we knew we wanted to make a different sort of dungeon. And this is one where I ended up stepping into the role of directing the creation of the dungeon specifically. The person who had been specifically in charge of dungeons up to that point had just changed over. I knew that what I wanted to give it more flavor. I think I was responsible for maybe half of it and I think the new person working on dungeons did the other half in this case.

Aounma: It depends on the project, I guess is the best way to answer this. In the case of Ocarina of Time I did the original layout for each of the dungeons, but that’s really rough to try to do that all on one person. You can approach the schedule in a slightly different way where you have a different person assigned to each dungeon in the planning role, but that’s not something you can do when you have a really small team, of course. These days, we have larger teams and all of them come on with the experience of having played previous Zelda games, so it’s a little easier to divide that out now.

On why Nintendo made a “sad Zelda” in Majora’s Mask…

“When we talk about the feeling of sadness in a game like Majora’s Mask, for us ultimately it’s something that we think about in terms of how it motivates the player. In this particular case, that really strong feeling of sadness makes you want to save this world.

“And you had a similar situation in Ocarina of Time, where Ganon was threatening to destroy this world, a hero rises to oppose him. But it didn’t have that same sort of tone. It was more a hero story there. In this particular case, we’re looking at a slightly different way to tell that, which is that the sadness of this world can also raise a hero.”

On the sidequest involving Anju and Kafei…

“The inspiration for that particular sidequest actually came shortly after Ocarina of Time when I went to the wedding party for one of the members of our staff. At the time, we were thinking about what sort of events we could include in Majora’s Mask. And I was talking with Mr. [Yoshiaki] Koizumi, who directed this game with me. He’s now working on 3D Mario games. And we said to each other, ‘I can’t recall seeing wedding portrayed in a game like this before. It would be really interesting if you had three days leading up to the wedding but there was this horrible cataclysm happening alongside it.’ That could be really impactful, we thought.”

“Well, at the time, when we were thinking about what sort of events to include in Majora’s Mask, we knew that we wanted to age up the themes of the events a little bit and get into a slightly more adult feeling drama moment here and there,” Aonuma said. “And so I think as a natural outcome of that you end up with slightly more difficult to understand sequences. And slightly more mature themes coming out along the way. So, certainly the item trading in Ocarina was very easy to understand, but this ended up quite a bit more complicated.

“The way we thought about it at the time was, because our target is slightly older—we’re thinking about adults—this is the sort of thing that adults would clue into and get it a little more easily. But, in the final product, I think it is a little difficult to understand in some cases, and that’s why I’m really happy to have the opportunity in this new 3DS version to make it such that the Bomber’s Notebook makes it so that you can understand the sequence a little better and make it easier to accomplish.”