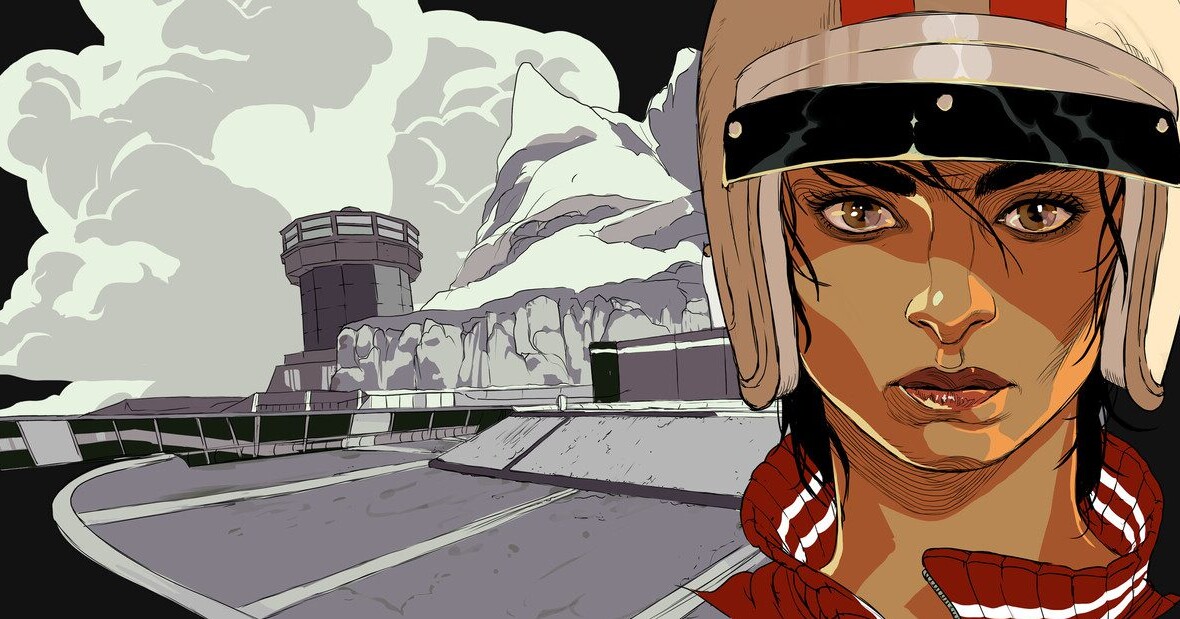 Rollerdrome by Roll7 and published by Private Division, is a high intensity game where you shoot down enemies while rollerblading. Slow down time to perform stunts and take down enemies to clear the arena and win the championship. If you’re into difficult games to master your abilities and rollerblading, this may be the game for you.

Rollerskating…with guns! The premise sound simple and exciting. Go around a skate park and hose down some baddies. But how do you reload? You have to do tricks of course! Rollerdrome has the problem where it took a lot of interesting ideas and concepts, but poorly hacked them together. There is a brief tutorial that teaches you the movements, but this isn’t enough time to get you used to navigating the world. Button inputs are purposefully delayed, so you have to be conscious about when to release the jump button. Overall, Rollerdrome expects you to be an expert immediately. You’ll soon find yourself swarmed with enemies, with types getting more powerful as you move along the game. The movement combined with the enemies turns into an unplayable mess at some points. You have to be near enemies to lock onto them, but if you don’t kill them fully you’ll have to circle back around to charge at them again. There’s no great way to quickly change directions, so turning takes a while. This problem is counter to some enemies where you have to break their shield to damage them, but there is only a tiny window available to hurt them before they put their shield back up.

The enemies in Rollerdrome are unfortunately bland. They don’t encourage the player to play in a certain way. When you first drop into the arena you may have a plan to take down the first set of enemies in front of you, but after that their placement is scattered and removes any inkling of a best tactic. Enemies can feel greatly overpowered at times. Besides the enemies that can only walk around and hit you with a bat, everyone else has the possibility to attack from across the arena. Sniper sights are constantly pointed at you, and never-ending plasma beams light up the scene. These problems could either sound like an exciting obstacle to tackle or an unbalanced slog that you want to avoid. To me it was the latter.

While Rollerdrome presents a few interesting gameplay ideas, the design of the game all together is lackluster. The difficulty progression of each level is a steady build up of enemies with no pause in between. Luckily the settings include assists that make you invincible and never run out of ammo, but if a game was actually well-balanced it wouldn’t have to include these features. Rolling around and doing tricks is fun. Shooting enemies while in slow motion is also cool. Rollerdrome is constantly forcing you to focus on one aspect while you’re trying to do the other and it loses the game flow. Because Rollerdrome has two different game systems happening at once and tries to maximize both of them, the controller is cluttered with unusual, unsatisfying button presses, to the point where you’re almost pressing all the buttons at once.

Rollerdrome was so close to having an interesting story. Before each bracket you could poke around the rooms and discover conspiracies between the government and the hosts of the competition. The storyline never gets farther than that, however. It would have been nice if the player could make some choices in the locker room that would affect the main gameplay, like powerups or enemies on the field. The story and gameplay are disconnected. There are other competitors in the competition, but you never speak or see them face to face. They’re not even in the arena while you’re there. The same problem with the story is with the gameplay: nice ideas, but terrible execution.

Luckily, Rollerdrome excels in art and music. The vibe of a dystopian, Borderlands type of artwork and world is well done. The cell shading makes the game feel clean and crisp, and is probably why most people will feel attracted to purchasing the game. The music is a mixture of darkwave and synthwave with spooky and ominous tones. Completing Rollerdrome also unlocks a more difficult version of the campaign including remixes of the soundtrack. It can be disappointing to find a game that is so visually and aurally well-polished that has big design flaws. If there is one bad thing to say about the art, it’s that it has a mostly bland color scheme. I know it’s trying to capture more of an older era, but if this is supposed to be set in 2030, make the scene feel more updated. Graffiti the ramps, outline edges in LEDs, this is the future we’re talking about with rainbow glowing gaming computers and the 90’s coming back in style, don’t get stuck in the dull browns of the 1960’s.

In summary: Mixed gameplay that could’ve been fun as either a shooter or a rollerblading game, but not both. Story left much to be desired. Art design and music really sell the game, unfortunately the game design flaws outweigh the great artwork.

Rollerdrome has many interesting ideas, from the cool skating tricks, to the time-altering combat system, to the cell-shaded art and synth music. It just can’t seem to figure out how to blend them all together.