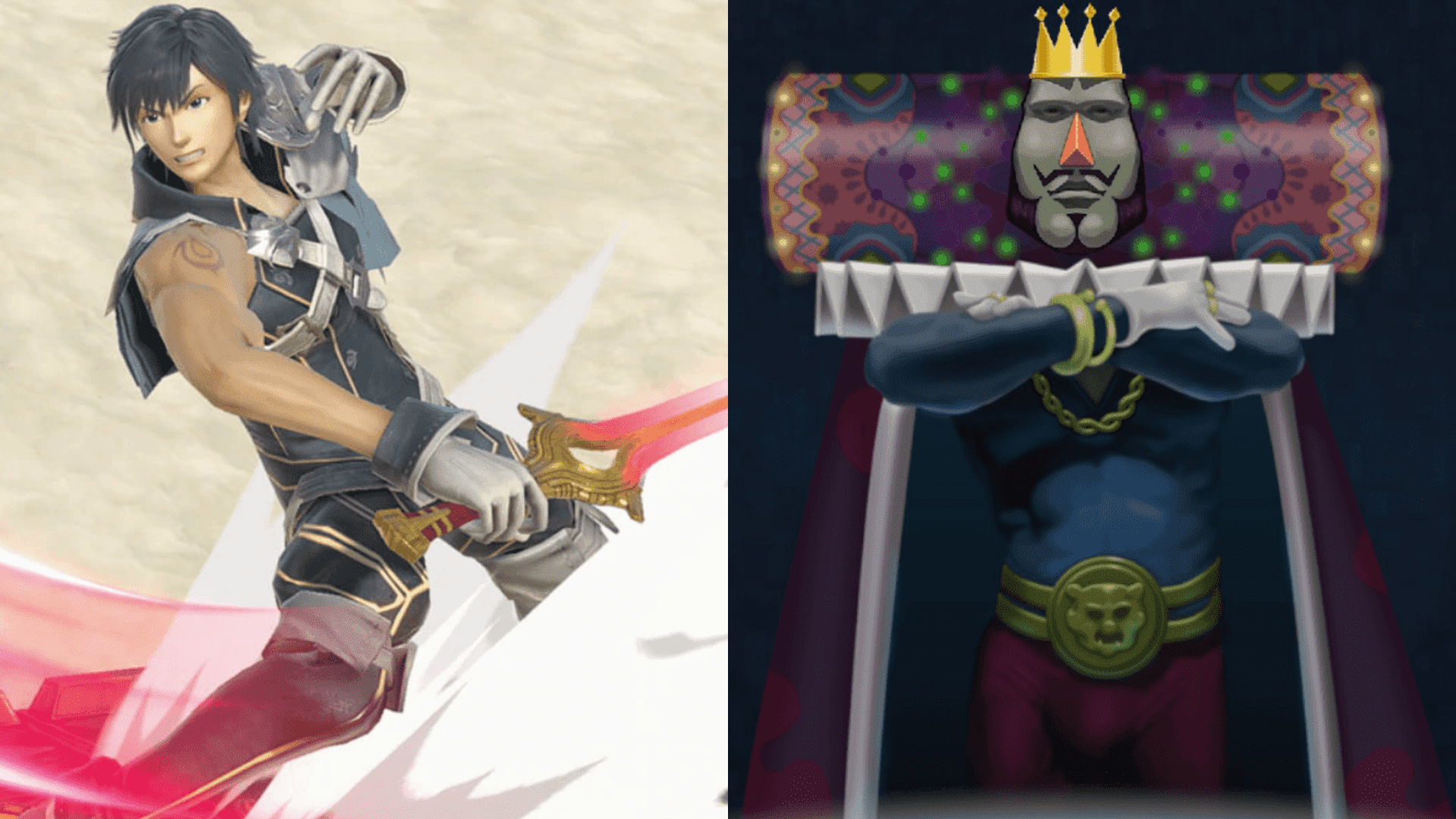 Video games have given us plenty of sharp dressed men, from the stylish suits of Hitman’s Agent 47 to the iconic red coat worn by Devil May Cry’s Dante. But what about the gentlemen who aren’t going to be strutting their stuff at Paris Fashion Week anytime soon?

Maybe the colors clash, maybe the pieces of the outfit don’t match, or maybe they’re simply wearing something so utterly ridiculous and ugly that you can’t keep a straight face when you look at them. From the head-turning to the eye-burning, here are ten game characters who could probably stand to be told that their outfit choice just isn’t doing it for us.

Before we get into the list, some honorable mentions: Tidus (Final Fantasy X) for going for “sporty” but failing, Kazuma Kiryu (Yakuza) for wearing the same outfit for 20 years with no variation, Sora (Kingdom Hearts) for those uncomfortably clown-like shoes, and Tingle (The Legend of Zelda) for that truly nightmare-inducing green jumpsuit and face-paint combo.

As Exalt of Ylisse, it’s Chrom’s job to represent his people. He chooses to do so by donning mismatched boots, sporting uneven sleeves and, after getting a class promotion, wearing his country’s most prized and valuable artifact – the titular Fire Emblem itself, a jewel-studded shield – as a fancy accessory. While I understand some of the logic behind his outfit (his missing sleeve shows off the Brand of the Exalt, proof of his royal blood) there’s really no excuse for the rest of the ensemble.

Advice for Chrom: Use your Super Smash Bros. winnings to splurge on some new threads. Better yet, let Bayonetta take you shopping.

Ardyn firmly believes that he is the rightful King of Lucis, and that it should be him rather than protagonist, Noctis, sitting on the throne. The problem? While Noct impresses his people with his sleek black royal raiment, Ardyn sneaks and schemes around the countryside in a tattered coat, clashing scarf, ripped gloves and shoes, and an absolutely ridiculous hat. At least he ditched the “singular fabric wing” from the Kingsglaive movie – hate to break it to you, buddy, but Sephiroth you ain’t.

Advice for Ardyn: Dress for the job you want, not the job you have. “Hobo chic” is so two millennia ago.

Ultimate Anthropologist Kiyo somehow manages to look more like a dictator than his classmate, whose title is actually “Ultimate Supreme Leader”. He chooses a dull olive uniform and hat which do nothing to flatter his naturally androgynous beauty, and his zippered mask looks a little too much like bondage gear for comfort. In a game about committing murder and getting away with it, being “the person in the room who looks most like a serial killer” generally isn’t a good idea.

Advice for Korekiyo: You’ve got a student at your school whose talent is being the Ultimate Fashionista. Take advantage of that!

This bawdy bard’s ensemble is as complicated as his various aliases. He had three games to get his look right, and yet somehow he never once managed it. From the poofy sleeves and pants, to the overloaded jewelry, to the “trademark” ever-wilting feather in his cap, Dandelion certainly draws the eye, but not in a good way. Scenes featuring the character can be genuinely distracting and headache-inducing, especially when paired with the far more sensibly dressed Geralt.

Advice for Dandelion: Take a leaf out of the guy who played you in the Netflix adaptation’s songbook. He managed to pull off “flamboyant” without crossing into “cosplaying a fabric store”.

Balder’s a priest, so I guess it makes sense that his general color scheme is white and gold – but the guy takes it way too far. He layers multiple white-and-gold pieces featuring conflicting patterns on top of each other, and caps off the entire thing by accessorizing with a giant peacock’s train and a live snake. He must have heard the words “feather boa” and totally misinterpreted what they actually meant.

Advice for Balder: Run. Now. Before PETA finds you.

There’s Pietro, whose dedication to clown culture is so strong that he’s apparently painted his entire body to reflect that. There’s Harry, an unkempt hippo who pairs a scraggly beard with a hideous camouflage outfit. From Barold, the uncomfortably human-looking bear, to Limberg, the monochrome orange mouse, there’s a surprisingly large amount of villagers in Animal Crossing: New Horizons whose clothing choices are so horrible that practically no player will allow them to call their perfectly designed island “home”

Advice for Villagers: Learn some basic color theory. But first, get off my island.

4. The King of All Cosmos – Katamari Damacy

The King’s outfit certainly evokes a “royal” feel, with his large frilled collar, sparkling headpiece and rich purple and blue garments. However, his entire ensemble is several sizes too small and disturbingly tight, meaning that his abs and, er, “package” are clearly on display. Given that the King spends most of his screen time standing directly in front of the player and lecturing them from on high, you’ll have seen far too much of him just a few levels into the game.

Advice for the King of All Cosmos: In fashion as it is in the starry night sky, sometimes less is not always more.

This Pokémon League Champion is probably required to pay tribute to his various sponsors when he battles. However, the fact that he chooses to do so by pasting them onto the back of a long, fluffy, medieval-style cape, which he then pairs with fairly standard athletic gear, is all on him. In the Battle Tower, he switches the cape out for a bright red suit, khaki pants, high boots and frilly white cravat that he probably thinks make him look dapper. Unfortunately, well…he’s wrong.

Advice for Leon: Every time you win a match, stand up and endlessly list off your sponsors until the audience gets bored. Somehow, that would still be less obnoxious than the cape.

Forget clowns – Kefka’s dressed like the entire circus. Sure, it made him an eye-catching and highly memorable villain…but at what cost? I hate looking at Kefka. I hate fighting Kefka. I hate thinking about Kefka. I hate the thought of having to describe Kefka’s outfit in detail so much that I just listed a bunch of things I hate about Kefka so I’d run out of space in this article and wouldn’t have to.

Advice for Kefka: You can’t fix this mess yourself. I’d better see you on the next season of “Extreme Makeover: World of Balance Edition.”

1. You, The Player Character – Various Titles

OK, here’s the truth: this list was secretly an intervention. You know those games that let you customize the main characters appearance, decking them out in various armor, costumes, hats, accessories and perhaps even body paint? Like The Legend of Zelda: Breath of the Wild, or Fallout 4, or The Elder Scrolls V: Skyrim?

And how easy it is to leave the poor playable fellow looking like an absolute mess, wearing some mismatched, horribly dyed, color-clashing set?

How laugh-out-loud funny? How simple a source of likes and retweets and Internet karma it is to make your character look downright hideous?

Why not give them a break and let Link or the Dragonborn and all the others look nice for a change? After all, they’re out there saving the world every day. They deserve it.

Advice for You: Don’t assume complete control over a man’s wardrobe until you’ve walked a mile in his bright pink knee-high boots.

Got any fashion advice of your own for these video game men? Have any unique looks that you think should have been on this list? Let us know!