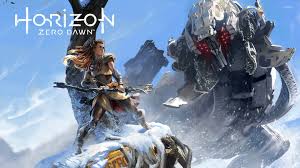 Horizon Zero Dawn is a game that excites me for the future of gaming. For a long time now gaming has been slowly moving towards a sole multiplayer experience. Games such as Destiny and the Division have come and gone with many people finding them quite enjoyable, but the sense of losing yourself in a gripping story has just not been there in the past few years of gaming. Horizon Zero Dawn is a refreshing break from the multiplayer madness that is modern day gaming. Set in a futuristic world where machines rule the earth and humans have gone back to living in small tribes, Horizon does an outstanding job of making you feel as if you are just as much a part of that world as everyone in it. Aloy, who is the games main protagonist is truly phenomenal. Her story evoked so many different emotions in me. I found it so very hard to pull myself away from it.

Horizon is set in a very large open world. It is probably just a bit smaller than the world of Skyrim. What is in Horizons world is what makes the game so special. Filled with ruins reclaimed by nature, the game evokes a real feeling of hopelessness for humanity in the beginning. As the game moves on we see how advanced the human race had become before the machines took over. The video logs and journal entries scattered all around the world makes the game feel even better. I loved stopping in the middle of exploring to read some of the stories left behind by people. There is also so much to do in Horizon as well as the story. The game cleverly makes you craft your fast travel packs so you don’t have an unlimited supply. This could have potentially been a very bad idea if the world was boring to explore, but I loved being made explore this beautiful world. For certain main quests I would find that I would need to walk 4000 metres across the map. By the time I had reached the place I was trying to get to I would most likely have taken down one of the many bandit camps in the game, taken on many different types of machines and probably have stumbled upon a few side quests to do. Crafting is also a huge part of the game, with supplies scattered all over the world. It is essential to pick up all the supplies you can hold as you will need them to make arrows for your bow, which is your main weapon. Horizon is a game which really lets you choose your own path. You can follow the story which is brilliant, or you can go out on your own exploring different cities, doing side quests, taking on bandit camps and battling some of the toughest machines the world has to offer. No matter what way you want to approach the game, it has something good to offer.

There really are not that many flaws in a game that can be considered a near masterpiece from Guerrilla games. One very minor flaw was how Aloy forced doors open with her spear. When she was putting her spear in the crack in the door it seemed to just phase through the door. The freerun mechanics also only work in certain areas which I felt was a little bit annoying, as there were many obviously accessible ledges that I couldn’t get up to because Aloy wouldn’t catch hold of the edge. The story was excellent throughout, it ebbded and flowed and took loads of chances which all payed off. The story was thought provoking and constantly left me wanting more. Every main quest seemed to end on a bit of a cliff-hanger and made it hard to ever want to turn the game off. I also thought it was a good idea by Horizon to only let you save at campfires. It made the element of exploration slightly more risky, because if you got yourself into trouble you could not just save at any point. When playing Horizon I felt like it took inspiration from other great RPG’s and even some movies. For example, the opening scene is very reminiscent of the opening scene in the Lion King and then the campfires give off the same kind of feel as the bonfires in Dark Souls do. I think it shows how brave Guerilla games were, to take ideas from other successful franchises and incorporate them into this brilliant game world.

Horizon is a game that you can get truly immersed in. The story is roughly 25-30 hours long and to be honest that’s nothing in comparison to how much more gameplay there is. If you incorporate Bandit camps, side quests and other character building events from the game, there is probably well over 100 hours of gameplay there. That is without all of the time you will spend fighting machines for fun, because the combat system is just that good. I never felt like I couldn’t take on an enemy, but I always needed to have my wits about me for every combat situation. All of the machines attack in different ways and so you always have to prepare yourself for different kinds of combat. The human enemies are pretty easy to kill and are not particularly intelligent by any means. Sadly it is quite difficult to take a stealthy approach to playing as there is no way to move dead bodies and so the AI will generally stumble upon someone you have killed and realise you are there. The game also has an override mechanic, which lets you take control of other machines to either, use as a mount or help you in combat. Like most open world games Horizon has a skill tree. You gain skill points from levelling up and from completing quests. The skill tree is extremely accessible and not at all difficult to understand. As a whole I think this game can be considered a true masterpiece in modern gaming. Horizon is a game that will be talked about for years to come and I for one never want to stop playing.

Hey everyone! I'm Simon, i'm a 21 year old guy from Ireland. I decided to get into video game journalism because I have been playing video games ever since I was old enough to hold a controller. I hope everyone enjoys my stuff, let me know your thoughts in the comments section of my articles :)