Now that season two of Overwatch 2 is in full swing, Blizzard have introduced a new limited time game mode for the arcade. From January 5th to January 19th, players can enter an eight player FFA match where you can play your favourite heroes as you’ve never seen them before. Based on the characters they have embodied with their new Greek mythology inspired skins, the heroes are now equipped with new powers that help them on the battlefield. Unfortunately for me, this was a massive flop.

What is New for This Game Mode?

Widowmaker takes on the role of Medusa and has the ability to stun her enemies if they look at her when she is scoped in with her sniper rifle. Roadhog is now the Cyclops who grows in stature when he uses hit ultimate ability and wields a gun capable of shooting boulders at enemies. Reinhardt becomes the Minotaur whose ultimate ability is bigger and better and can kill multiple enemies upon impact. Junker Queen is the mighty Zeus and can become charged with electricity in her ultimate that makes her shots a lot more powerful. Lucio is the swift footed Hermes who gains extra speed and unlimited ammo when ulting. The newest hero addition to Overwatch 2, Ramattra can unleash a devastating Nemesis Form that blasts out torrents of water with each of his punches. Finally, Pharah is the King of the Underworld, Hades and is now capable of moving around in her ultimate, known as Barrage, as well as ending with a rocket launcher that shoots out three projectiles rather than one. Pick each of these heroes throughout the FFA to unleash the power of the gods. Once the mode ends on January 19th, the hero with the most kills will be awarded with a commemorative statue on Overwatch 2’s Ilios map.

Sounds cool right? Unfortunately, my experience did not live up to the hype. The game mode includes no big introduction or even information – being treated the same as the basic FFA you find in the Overwatch 2 arcade. You are loaded into one of the standard FFA maps and left to your own devices. The only new information is the hero information you get once you’ve selected a hero with details of what their adapted ultimate ability now does.

The map is also littered with power ups that add charge to your ultimate ability as well as armour power ups which give limited time extra health to your health bar. Other than that, everything else is the same. It seems that a lot of effort was put into the new Greek mythology inspired skin and no thought was put into the accompanied game mode. The one stand out feature was Widowmaker’s ability to stun her enemies if they make eye contact with her – it added a fun new element in an otherwise stale game mode.

There are also new challenges that come with the event which award you with new titles as well as the Winged Victory Mercy skin if you complete six of these said challenges. However, majority of the challenges expect players to land 300 final blows as the respective heroes that feature in the game mode. Although a lot of their new ultimates can work for chain kills, the thought of having to achieve 300 kills (multiple times) in this game mode is not appealing to me.

I have been playing Overwatch long enough to know not to get excited for new game modes. I mean, how long have we had to play Junkenstein’s Revenge? But as a big fan of Greek mythology and also a huge fan of the new skins, I am still feeling a bit deflated that this was all we got. Even a 6v6 using these abilities (and more) would have been a better choice, in my opinion and would also allow you to play with friends which is always a must in Overwatch if you wish to stay sane. I hope that Blizzard work on their upcoming PVE mode instead of releasing what feels like unfinished game modes for the sake, of what I imagine, is to get people more interested in buying the featured skins.

What are your thoughts on Battle for Olympus? Let us know in the comments! 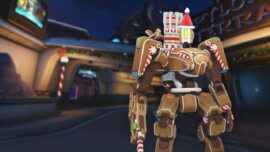