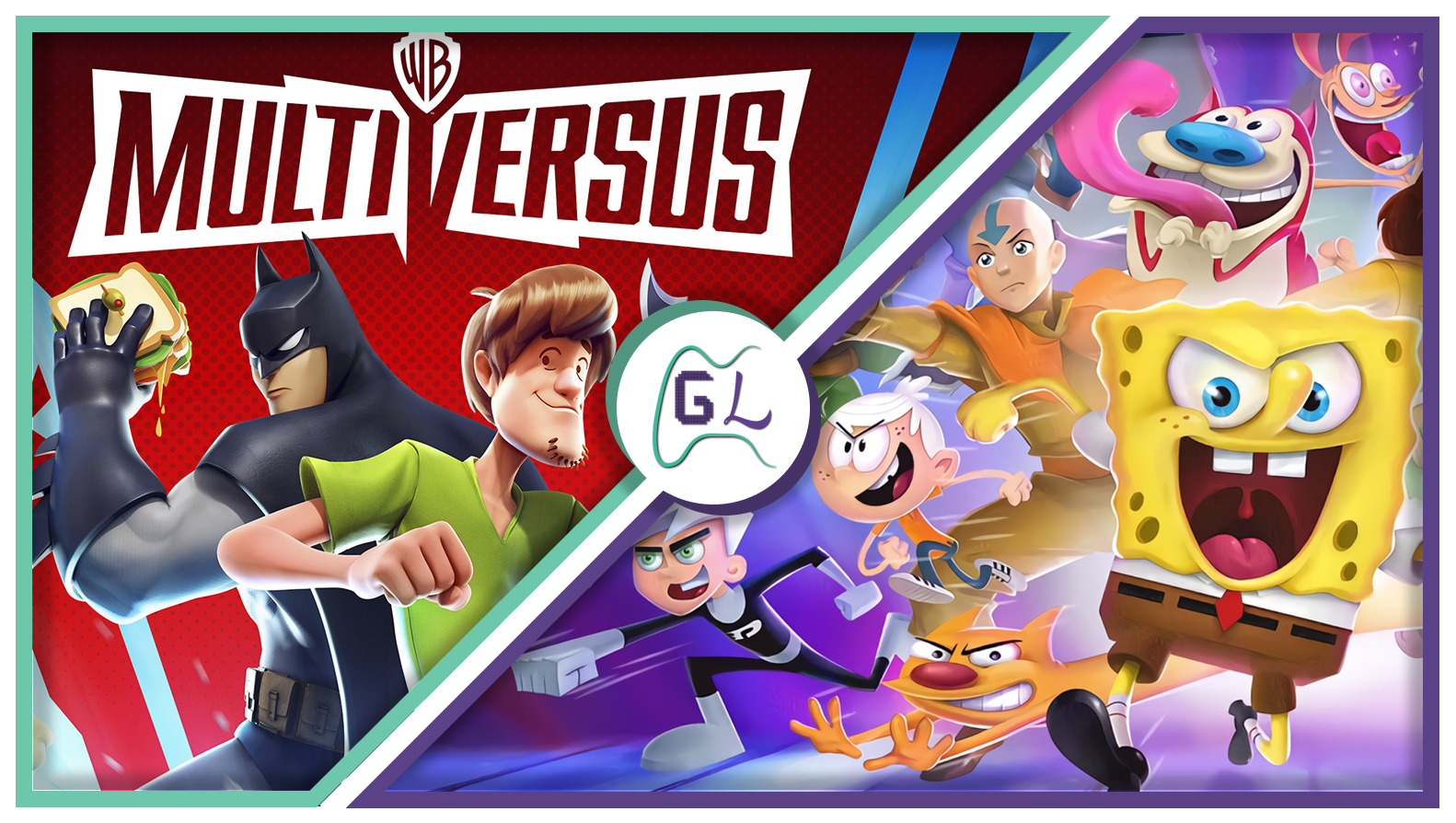 Crossovers are increasingly more popular in gaming, with games like Super Smash Bros. Ultimate and Fortnite making a name for themselves with their broad roster of familiar characters. Following this trend, there’s a new crossover fighting game in town with Warner Bros. Discovery putting all their properties in one basket with MultiVersus. The launch of the MultiVersus open beta comes less than a year after Nickelodeon All-Star Brawl, and leads us to the question – which is better? Luckily for you, we here at GameLuster have never seen two games we didn’t want to compare! Let’s break down the similarities and the differences so you can decide which one is best for you.

Our first challenger today is currently in open beta, MultiVersus. The game is developed by Player First Games and published by Warner Bros. Interactive Entertainment. MultiVersus is the place to be if you like Warner Bros. Discovery franchises, including but certainly not limited to Scooby-Doo, Adventure Time, Game of Thrones, Batman, Looney Tunes and more. These franchises are all extremely different in terms of audience and aesthetics, so all of them have been converted into the same 3D cartoony art style. The art style is reminiscent of the Disney Infinity style, in that they all blend together cohesively, at a slight potential cost of some finer details. Real world characters like Arya Stark can look a little weird, but the characters that originated as cartoons like Tom and Jerry really pop.

The background of the stages in MultiVersus also share those stylised, cartoon-y graphics. Across stages like Scooby’s Haunted Mansion and the Batcave, the graphics are clean and colorful, yet just like the characters, some stages can lose a touch of character that their original source material has. Despite this, some of the stages the game has really do shine, like the beautiful running water and fantastical background of the Trophy’s E.D.G.E stage. The game is still in open beta, so it will definitely have more stages in future.

Our second challenger is Nickelodeon All-Star Brawl, developed by both Ludosity and Fair Play Labs. The game is published by different publishers per territory, like GameMill Entertainment in North America. As the title suggests, this crossover fighter focuses on Nickelodeon properties, giving you all the fun of childhoods both past and present. Franchise representation can be found from SpongeBob SquarePants, Rugrats, Avatar: The Last Airbender and loads more. Like MultiVersus, this too has a cartoon-like, colorful art style, but arguably represents the source material better. Given all the Nickelodeon shows were cartoons, characters here retain all their original charm. This being said, Nickelodeon All-Star Brawl looks a little rougher around the edges in the technical department compared to MultiVersus, which is much sleeker.

Having far more stages than MultiVersus, likely due to the fact it is a complete and paid title, there’s a lot more to look at here. The stages of Nickelodeon All-Star Brawl are ripped straight out of the cartoons they come from, made 3D yet retaining all their texture and colors. As with the characters however, some of them appear lower budget compared to those of MultiVersus.

Both games are available on Windows, PS4, PS5, Xbox One and Xbox Series S/X, yet only Nickelodeon All-Star Brawl is available on Switch at present. Both games perform well on all their compatible platforms, maintaining a pretty solid 60fps which is essential for a fighting game.

Whilst they are both platform fighters, the actual gameplay of the titles can differ quite a bit, in terms of what the player will actually be doing at any given moment. We’ll start with Nickelodeon All-Star Brawl, where things are kept very simple. In Nickelodeon All-Star Brawl, you just choose your game mode, choose your character and play. Getting a game started can really take a matter of seconds. When playing as your characters, they may all have different abilities but they will play similarly. They have light attacks, heavy attacks and special attacks, without much else in the way of flashy extras. There are no ultimate attacks like in Super Smash Bros., and there are also no falling special items to throw around and cause mayhem. Choose a game mode, fight, repeat.

There’s a lot more to unpack in MultiVersus. Whilst you can play in a classic free-for-all format, the game is heavily focused on co-op 2v2 battles. This puts a lot of pressure on you and your teammate to perform well, so as to not mess things up for the other. Another element to balance and perform your best in MultiVersus is perks. Perks are power-ups for your fighters that will buff certain skills and grant new abilities like an additional jump, or a projectile block buff. These perks come mostly from levelling up your mastery of individual characters. You can also unlock signature perks that will grant new or tweaked abilities to a fighter’s existing movesets.

Both games allow the player to customize their fighters, although MultiVersus does this to a much greater extent that Nickelodeon All-Star Brawl. In MultiVersus, players can purchase individual announcer packs, skins, emotes, icons, ringouts (death animations), and more. This mass of customisation options exists to support the free-to-play model of MultiVersus. Whilst some cosmetics can be earned in the free part of the in-game Battle Pass, most rely on a paid Battle Pass or Gleamium, a premium paid currency. The customization in Nickelodeon All-Star Brawl is much more bare-bones, with some alternate costumes being immediately available that were added in a free update. It does also have player icons, which are earned through gameplay. Despite its lesser customisation, it is all given for free, unlike the heavily monetized MultiVersus.

As this is a fighting game, a final major factor to take into account is the animations and controls of the fighters. MultiVersus is considered by many in the fighting game space to control and perform animations better. The controls of Nickelodeon All-Star Brawl can feel rough and janky at points, which is not helped by the lesser quality of animations. Meanwhile, MultiVersus has some pretty undeniably beautiful and fluid animations. Whilst not controlling as robust as industry standard Super Smash Bros. Ultimate, it’s safe to say that MultiVersus’ smooth, albeit somewhat slippery, controls are the better choice here.

Although Nickelodeon All-Star Brawl did not initially launch with voice acting, it was added in a recent update, bringing it on par with MultiVersus. Voice acting does a considerable job at making both games feel more alive. This being said, the dialogue in MultiVersus can be a little bit much at times. I’m not sure any of us needed to hear Bugs Bunny saying “Westeros? Eeh, more like Worseteros” after beating Arya Stark in a battle, but here we are. Despite some odd dialogue, the abundance of character interaction in MultiVersus delivers a charm and immersion that sadly still isn’t present in Nickelodeon All-Star Brawl.

Whilst Nickelodeon All-Star Brawl may not have as great dialogue as MultiVersus, the competition is tougher with the music. The soundtrack of MultiVersus does have some standouts, but overall it can’t escape the theme park music vibes it gives throughout. This may be enjoyable for some, and it can feel a bit dreamy such as in the game’s main theme, but in the heat of battle you may expect something more energetic. Nickelodeon All-Star Brawl has a wider variety of music tracks due to it having more stages, and so overall seems to offer more with the soundtrack. The songs in Nickelodeon All-Star Brawl can be a little more hype than its competitor, and also do very well to emulate the iconic sounds of the franchises they come from.

It can be difficult to judge which of these games is better, given they both feel quite different. MultiVersus is a much more flashy and modern title, but is also heavily monetized and more disjointed in its roster. Alternatively, Nickelodeon All-Star Brawl feels more cohesive, without additional monetization elements. Despite this, MultiVersus takes the win for me. Although the monetization is disappointing and some elements like the music and aesthetics can be a bit boring, it has more customisation and feels more polished. Not only this, but the game is still in open beta, with a lot more time to improve. As a final point, a fighting game lives and dies by its controls and gameplay. The occasionally clunky Nickelodeon All-Star Brawl just doesn’t hold up to MultiVersus, despite all its charm.

Which of these games do you think is better and did we make the right choice? Does the monetization-free Nickelodeon All-Star Brawl appeal to you, or are you more excited by the free live service of MultiVersus? Let us know in the comments below, and keep your eyes on GameLuster for more smashing fighting game news!

Is this a joke? That Nickelodeon game is absolute garbage. Sorry to the folks who worked on it. Multiverses is so much better that it’s unfair to even compare the two.