With the release of Pokemon Super Mystery Dungeon approaching ever closer, waves of new information have been streaming in. Various new details were released including; Pokemon NPCs, Information about locations that players can travel to in game, and it was also revealed that you can send out mail requests to be rescued if you fall in a dungeon, just like the previous games in the series.

One way that this game will differ from the previous games is that it will be the first to feature multiple villages that act as hubs for exploring dungeons. These villages are spread across multiple continents that can be navigated using the aid of Lapras. Some examples of these villages were Gentle Town and Waiwai Town, both of which are found on the water continent.

There will be several new Pokemon NPCs running shops and service in the multiple villages. One example is the Pokemon Cafe in Waiwai Town, run by Kangaskhan. She will occasionally give you presents as a reward for helping other Pokemon. Other shopkeepers will include Hawlucha, the bird Pokemon that will teach your team new moves, Klefki, who opens Treasure Chests you find while exploring, and Cofagrigus, a returning NPC whose function will be to buy gold bars you find.

The last feature that was revealed in the return of the jukebox. This will allow you to listen to music thatr you unlock throughout the game. It also allows you to listen to the music through earphones while your 3DS is in sleep mode.

What do you think about the new Pokemon Mystery Dungeon game? Checkout the screenshots below and let us know what you think in the comments! 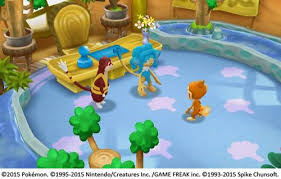 Hey guys! I'm a college student in England studying Indie Games Development, I also have a YouTube channel. I'm not really good at writing about myself so.. Uh, yeah. That's all folks!

The Making of Child of Light: Part 1