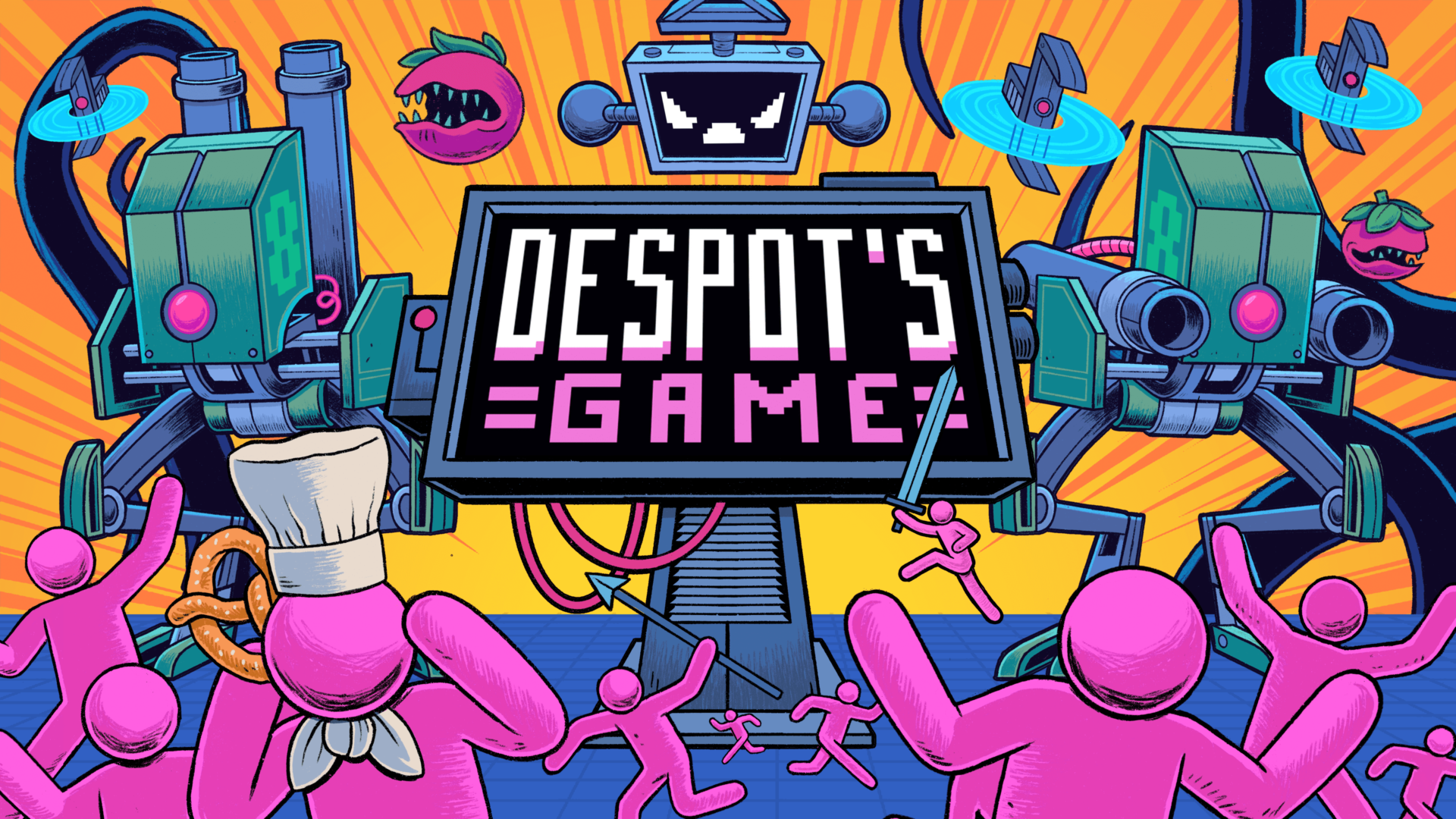 Oh no! Your little crew of humans are stuck in a maze of never-ending dungeons. Will you be able to command your team out of the dungeons in one piece? Probably not, but you can certainly try in Despot’s Game: Dystopian Army Builder, a goofy strategy game developed by Konfa Games and published by TinyBuild.

In Despot’s Game you lead an army of tiny humans through mazes of randomized dungeons. The game is a rogue like, where losing all of your humans means you have to restart it, but each restart gives you future bonuses for better a playthrough. Each room has a random set of enemies that are scaled in difficulty depending on the floor you’re on. Despot’s Game is strategy-focused, as the player can’t perform any real-time actions while the battle is occurring. It is only between battles that you can buy more food and upgrades. Depending on how well your planning is, your army can build up to a massive size, taking down any worthy opponent.

At surface value Despot’s Game can feel very thin. You are given a few choices of gameplay, which can include battling others online, but ultimately it’s the standard game option that you’ll want to play. Your team of feeble humans are plunked into an arena and you’re told to simply explore and try to find the end (if there is one). This scarcity of player motivations can leave you scratching your head; because the end goal is ambiguous, there isn’t a clear drive to want to get to the end. The bonuses at the end of each run are loosely explained, but a big problem with roguelikes is if there isn’t a noticeable impact or change after your run, playing can feel like a waste of time.

It’s because of the lack of story and player motivation that Despot’s Game does what it wants. When you move to the next floor a randomized story scenario appears. Depending on the decisions you choose you could receive a great bonus to help you through the dungeons, or get a modification that could hinder your army useless (my sharpshooters had to resort to melee attacks, for instance). These stories are witty, paradoxical, and absurd, but perfectly fitting for an army of pink fleshy humans. While the layout of the floors change, the order in which you battle the bosses doesn’t, so these small scenarios give Despot’s Game a refreshing twist.

While the theme of Despot’s Game can feel goofy and relaxed, the mechanics force you to think strategically. There are multiple systems that you have to juggle. While you may want to have the biggest, baddest army, you still need to feed them as they move from room to room. If you run out of food then your team will become weaker and famine will start to hit. The juiciness in Despot’s Game comes from all the decisions you could make. What is the best tactic? Should you get a massive army and focus purchasing a lot of food, or should you have only a small number with beefed-up modifications? The game allows you to find your own optimal strategy.

Because there isn’t a pressure on time within Despot’s Game, it can be something nice to relax to. Had a stressful day at work? Dress up your humans in tutus and pretzel hats and lay waste to some mechanical demons. You could theoretically go deep into the barons systems that the game has, exploring each possible scenario. You could then take these learned skills and face other players and their armies. But then again, there’s no real pressure to do any of it. I found the most enjoyment by using what I call “fuzzy logic.” If something ounces like a good plan, then I’ll take it. I could always use more food, so every room with food in it I’ll buy whatever it has. Despot’s Game can be loosely seen as an idle game because no matter what choice you make you’ll get an enjoyable outcome.

I’m a sucker for some well-done pixel art. The little humans in their various costumes are so wacky and fun to look at. Each of the humans has a randomized name that, for a little while, you develop a bond with, right before their squishy flesh gets pulverized by an oncoming tentacle. There are many items, abilities, monsters, and modifications to experience in Despot’s Game that the sheer number can be mind-boggling to think about.

The audio in Despot’s Game is also nicely put together. It’s dynamic in the sense that it changes based on the different game states, like if the player is in a menu or not. Walking into a boss room triggers heavy metal guitars to get you pumped up for the big fight ahead. The little squeaks and roars of the humans and monsters adds to the delights of the goofy game.

In summary: Despot’s Game: Dystopian Army Builder has straightforward gameplay that’s easy to learn, but offers multiple strategies to master. The game has little to no story, but offers a lighthearted narrative on each floor. The art is cute, fun, and juicy with its colorful pixelart and the audio prolongs the goofiness with squeaks and warbles, and dynamic music that’s fun to rock out to.

Despot’s Game is perfect for when you’re looking for something with strategy as well as a good laugh. While it’s not a game that will take up a lot of your time, it can be nice to poke your head into a couple of dungeons for an hour or so.