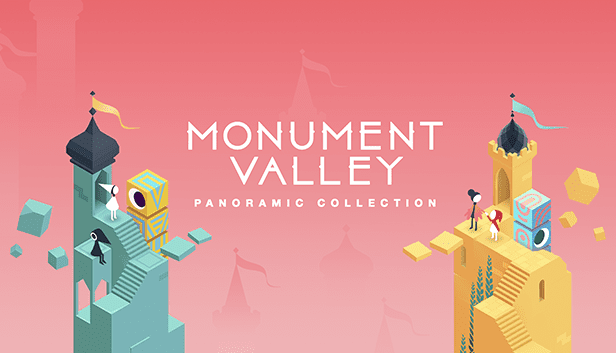 Monument Valley: Panoramic Bundle features a wonderful set of stylized puzzle games that focus on how we see the world. First made for mobile, this bundle features updated graphics and scenes that fit a wider screen. If you’re looking for a pretty brain teaser to relax to, this is the game for you.

I remember when Monument Valley was first released back in 2014. In my mind, it was one of the first “art” games on mobile that didn’t demand you spend hours playing it, like Angry Birds did. The game isn’t necessarily difficult or long. It took me at most five hours to complete everything in both games. At the time, it was nice to see more effort taken into the 3D art and coloring in a mobile game. Most games at that time were a cartoon-style 2D game that’s supposed to fill in an awkward amount of free time you had. You have to savor your time with each level, as a lot of focus has been put into each element of it.

Jump forward to today, where we now have updated graphics and more freedom with the space in which to display items on the screen. The gameplay itself is the same for the most part. Journeying through a series of rooms, you’re trying to direct your character to the end. You do so by clicking the walkable parts of the floor to have the character move to it. The path to the next point isn’t straightforward, however. There are mechanisms you can rotate or slide to move the world around, as well as buttons to press that manipulate the world further. Most rooms aren’t complicated and only contain one solution. Buttons are typically used to direct the player to their next point. The player doesn’t have to think too hard to solve a puzzle, and could reach a solution just by clicking around the level and messing with all the interactable objects. What makes these games challenging is how it deals with perception.

Monument Valley uses its vantage point to play with the player’s mind. At first it may seem like it’s impossible to get to another platform until you rotate part of the scene and line up the squares. While the game includes features like water or vines or other natural shapes, most of Monument Valley is set on a grid. If we picture a simple square grid and overlay it on top of the game screen, we realize our path aligns to it perfectly. Not every level is a perfect square, however. We have to take this square grid and skew it, or slant it into more of a rhombus shape. So while it may seem like an object is too far away, that is because we are injecting our reality within the game. When we see objects that are closer to us in real life they appear bigger. Putting these objects at perceptibly the same level vertically or horizontally they may appear to be next to each other, but we know in reality that isn’t so. In a computer game, however, that is absolutely the case. Computer graphics are made up of planes and vertices, so when two objects share the same plane, the game allows the character to move across these objects. For us in real life, this seems wild because it breaks our understanding of how space works, but for the game it is completely logical.

So we cracked the code on how the world works and how it plays with our mind, but each scene is so vibrant and interesting; how does the game create this impact? Well to start, let’s reflect on its architecture. The valley of monuments is mostly thick sheets of granite (or some kind of stone) that is mostly featureless, save for some geometric inscriptions on blocks. This style is reminiscent of brutalist architecture, which focuses on more of the form of a building rather than its materials. A lot of this architecture has walls and pillars of concrete that present a blocky layout. The key feature of this style of architecture is that it induces intrigue. Because only its form is offered to us to view, we fill in our own meaning of what the structure could represent. Presenting us with a form of unknowing gives us an ominous feeling, that something is important but we can’t seem to place the source of power. Granite is not a light object, it is dense, slow-mowing, and heavy. While Monument Valley is merely bits of code projecting interlocking planes, it simulates this weight and importance by grinding sounds, dust shifting, and laborious animations with game-shaking thumps. The blend of sound and animation is what gives these game elements importance, while the featureless architecture has us to believe something sinister is going on beneath the surface.

To carry us along our journey of intrigue, we are stopped periodically by ghostly figures of the past. Mostly our ancestors telling us of our importance to the valley and remembering why we are there. These statements are designed to create both a sense of urgency and be as ambiguous as possible. The true reason why this valley of old architecture exists is never truly explained, but we are the ones that have to keep it up to date and tidy, as it’s done throughout the generations. There is a kind of magic to watch over, a magical geometry we must protect from those who wish to steal it for themselves. These breaks with our ancestors give pacing to the difficult puzzles, because it allows the player to rest/relax a moment by eliminating color and multiple elements to focus on, especially after what Monument Valley considers a more challenging puzzle.

As mentioned earlier, every part of Monument Valley has been given an intense focus. What I mean is that each aspect that is presented to the player (art, mechanics, audio) are meant to be as enjoyable as possible. When this happens parts of a game take on game aspects themselves. One obvious moment from the Monument Valley series is when you complete a level in MV2. If the ending isn’t a directed animation the player is given the opportunity to draw an object in the sky. By controlling a single line and having it reflected in a circular pattern, you can create some interesting woven patterns, which are then saved once you release your mouse. This small feature allows players to imprint a part of themselves into the game, as it uses something they’ve created that progresses the story. This mechanic becomes a game within itself, allowing the player to spend hours doodling and trying to weave the most interesting pattern. Monument Valley at large understands the joy in this feature, so it offers the player to draw again after they’re done.

While the game sees new life on the computer screen, not all of it has been optimized for it. Clicking instead of touching the screen is a little more difficult to control, as swiping features don’t work well on a mouse. When holding onto a moveable object and moving my mouse around the screen, sometimes the object will get stuck in a certain position or jolt around uncontrollably. This is mostly because it was used to the minimal input you get from a touchscreen. Having the world bigger didn’t help Monument Valley in some sense. Now that the camera is closer and objects are bigger in the world I can see awkward cracks in the world where the blocks aren’t directly adjacent to create a smooth wall. Now the monuments are supposed to look old and ratty, but there are parts where it’s obvious things were supposed to match up but aren’t. For being a “panoramic” version of the game I was expecting a lot more scenery. There are still parts in Monument Valley where the world is secluded to a couple of blocks in the center of the screen. It would have been nice if the game included more parts to the left and right, increasing the length and difficulty of the puzzles. Unfortunately it appears to be a clean rip from the mobile version with the colored background filling the left and right.

The art is at first simple, but that is because of how well each scene is laid out. Each scene has its own color scheme, sometimes following a nighttime/daytime aspect, sometimes following along with the current storyline. The backgrounds are typically this wonderful wash of gradient colors, with included fog and dust to give itself some depth. When Monument Valley wants you to focus more on what’s happening in the scene in the center, it removes the background or makes it a single bold color. The characters are simple shapes, but involve colors that draw your eye to them so they stick out from the scene.

The second Monument Valley handled audio better than the first, but that’s not to say the first wasn’t good. The first MV got the sounds of granite and ominous echo right, it just didn’t have much music, and the melodic sounds it had were randomly selected from a series of five notes, which gave a constant droning at some points. The music in the second game was more dynamic. While still having random patterns, they were more linked to the background music rather than the actual actions the player performed. Sometimes the rhythm would pick up and create little exciting moments that were more enjoyable than what the first game offered.

In summary: simple gameplay that gave room for the mechanics, audio, and art to all thrive.

Jordan played Monument Valley: Panoramic Edition on PC with his own bought copy.

Monument Valley: Panoramic Edition is a great classic to experience again. While some mechanics and scenery were left unchanged, the desktop version gives new life to the series, making the puzzles even more vibrant than before.