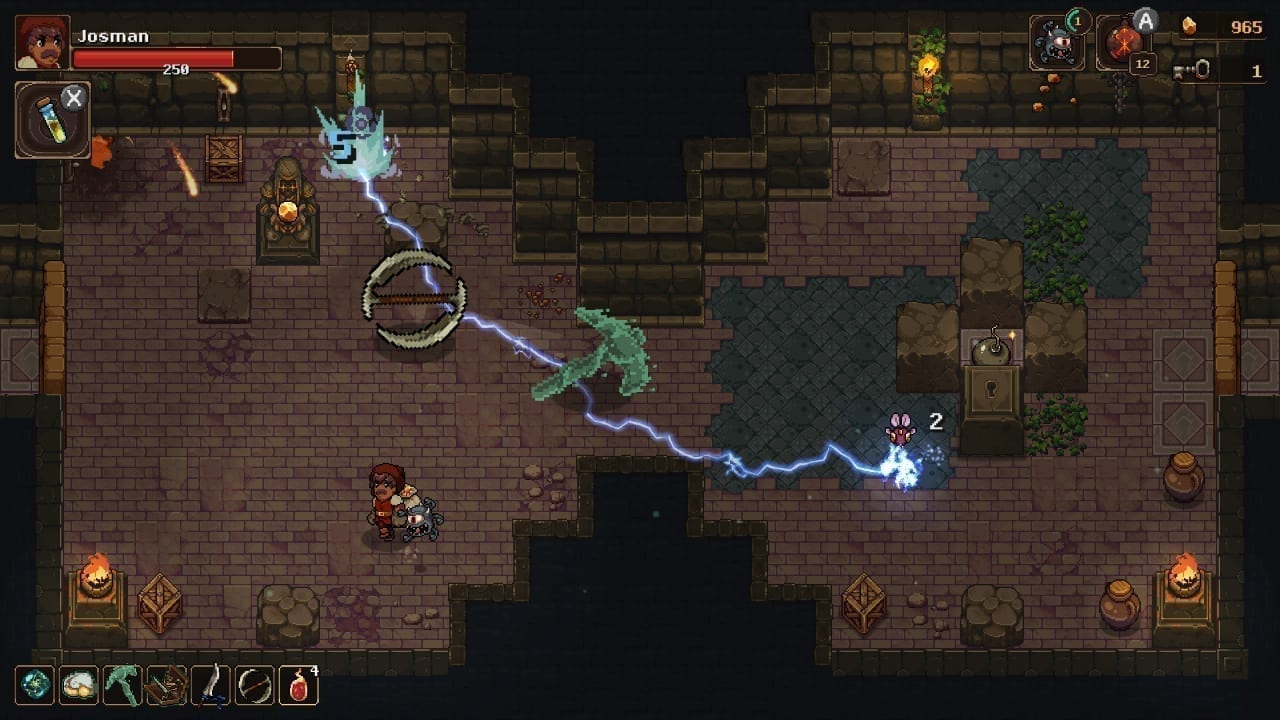 Undermine is a funny word, in that it has a very literal meaning, and a metaphorical meaning that has completely overshadowed the literal one. Undermine by studio Thorium is out for practically every system you can imagine right now and has decided to take those definitions and have fun with them, giving you a game in which you undermine the Undermine to undermine the efforts of powerful people.

When you first start Undermine, you are given the image of a series of randomly generated peasant sprites hopping into a mine one by one. The game is telling you not to get too attached, you won’t be with any particular one for long. Like in real world mines, life is plenty dangerous and it’s even shorter in Undermine. You’ve been summoned by an archmage in order to figure out what’s going on in the mine. Why doesn’t the archmage do it? Because he is important and you are expendable. After several floors of defeating enemies, grabbing gold – and grabbing it back from greedy slimes that want to steal it – you will almost certainly die. And when you do die, you drop effectively all of the bombs, keys, potions, relics and curses you might have acquired on your trip, keeping only a portion of your gold as you come back to the top of the dungeon to buy permanent upgrades or new one-use supplies and try again with a new peasant and a new randomly generated dungeon.

If this is sounding sort of familiar, it’s because Undermine falls into a genre of games known as Rogue-likes. After the punishingly hard ASCII game Rogue created a new adventure every time you played, gave you one life, and deleted your save upon death, Rogue-likes are typically defined as any games involving a randomly generated play areas and progress partially or entirely voided on death. Rogue-likes tend to be turn-based mystery dungeon games like Shiren the Wanderer, Izuna: Legend of the Unemployed Ninja, or Pokemon Mystery Dungeon but, as the Rogue legacy proved, even a platformer, or in the case of Undermine an adventure game, can be Rogue-likes.

There’s a sub-genre of Rogue-like called “Rogue-lite” which tends to mean that death is more forgiving, though not without consequence. Some will even let you keep plot progression and upgrades. Undermine definitely belongs to this latter category,  but don’t think the game is going easy on you, you are going to die. Over and over and over. But each trip nets you more gold, which means more upgrades, which means your next mine run will be longer. Probably. There’s always something that might come out and kill you, like a curse, a particularly nasty room, or even being dumb enough to fall into the same pit five or six times while trying to avoid enemy attacks. At least every time you try the dungeon it’ll be a different challenge with different rewards, and hey, maybe this time you’ll find the right collection of relics to let you survive to the next boss fight and beyond.

Oh, right, boss fights. While the regular dungeon is procedurally generated, boss fights are not, each one is unique and should be completable no matter what relics and supplies you’ve accumulated during a run, but that doesn’t mean they will be easy. Every boss fight I’ve seen so far has seen me either die several times or just win by the skin of my teeth, and defeating them feels incredibly satisfying in addition to giving you a really sizable gold reward. Bosses stay dead after you first kill them, though you can find their lairs again on the appropriate floors, and killing them is the only time I’ve found so far to exit the dungeon without dying and losing gold.

I still haven’t gotten to the bottom of either the Undermine or the machinations going on in the Undermine, but I’m going to keep exploring, keep checking for secret walls and hidden chests, trying to find out what’s really going on in the caves and fortress and more beneath the mines.