Valiant Hearts: The Great War is a puzzle adventure game developed by Ubisoft Montpellier and published by Ubisoft. The game is inspired by letters written in WW1 taking you on an emotional gripping story about sacrifice, love, survival and friendship. It centers around 4 characters and a dog all on the battlefield, where they all connect together throughout the story to help a young German soldier named Karl find his wife and child.

Valiant Hearts isn’t your typical game, but that doesn’t mean it’s bad. Even though it’s set in WW1, there aren’t any awesome fights against various waves of enemies or anything like that, but it is still pretty unique. From the hundreds of games I’ve played I haven’t played anything that you can really compare it to apart from games by TellTale (The Wolf Among Us, The Walking Dead); but unlike the TellTale games Valiant Hearts doesn’t include choices or deciding what your character says. 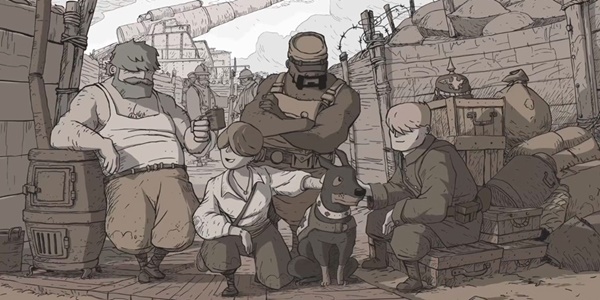 The story is what this whole game is about, taking you on an emotional journey throughout. The campaign lasts around 6-8 hours, and is very easy to beat as the puzzles aren’t tough. This game makes you highly focused on the story and the amazing level design behind it makes you feel like you’re in the Great War. The story does start of slow at the start and takes a bit to kick in, but it all leads up to a very heart-wrenching ending that will make you grab a tissue box. All four of the characters also tie in together by the end, which makes you crave for more, as the second half of the game is where it really shines.

Even though the characters don’t talk (just mumble to each other), the game is narrated very well by Dave Pettitt, who has a soothing sound for the ears. The soundtrack behind the game is also amazingly done. It has one of the best scores I’ve heard in a while for a video game, and it blends so perfectly to the game. There are also 3 music levels where the level plays out in rhythm to the music, just like in Rayman Legends. When i first booted up the game i sat in the main menu for 5 minutes because the music was just too good to finally start the game. The game runs on UbiArt Framework; it does look pretty and the engine is perfect for the way the game plays. It even amazes you more since it has been noted by Ubisoft that the whole game is hand drawn.

The game looks highly at the emotions of what the war had caused on people, and from all perspectives. The 4 characters you play as are all different to each other and each have their own unique back story. There is Karl who is a young German Soldier who was separated from his wife and child. Karl’s father-in-law Emile is forced to cook for the Germans. Anna who is a Belgian student and doubles as a battlefield nurse. Freddie is an American who volunteered to join the French army after his wife was killed by the Germans, and last but not least the very cute dog, who you can pat whenever you like and it never stops being cute or boring.

The game plays out like an interactive history lesson, and the facts that you learn throughout the game are true as they are all given from History Professionals. Since nearly every section is different to the last in someway, the facts tell you about what happened here and how horrible the conditions were for some people. The game also include real photos from The Great War. The collectibles also give a little background to the war, as the game tells you what each collectible was used for during the war. There are also diary entries from all the characters including Karl’s wife which are at times usually emotional but still very interesting and make you eager for more.

There isn’t much to do in the game after beating the story, apart from visiting certain sections of the game to clean up the collectibles. But Valiant Hearts is one of those games were replayabality isn’t expected as there’s no way the developers could add extra hours. Valiant Hearts still delivers in nearly all aspects, having a few slow sections and repetive ‘puzzles’ it still makes you feel like you had an amazing journey from beginning to end. Even though it doesn’t feel like much of a game and the gameplay being ‘slow’, it is still the best downloadable title of the year so far.

HBO’s The Last Of Us Release Posters For Main Cast

Todd Howard on Starfield Delay and Pressure of Working for Xbox

PS Plus Games For December 2022 Announced

Review: The Knight Witch – Bold, But Missing A Little Magic

My names Anthony, I'm 19 and I live in Australia. Always loved writing reviews and now I'm here on GameLuster. I own a PS4, PS3, PS Vita & PS2 and an all round gamer apart from RPG, fighting & [most] sport games.