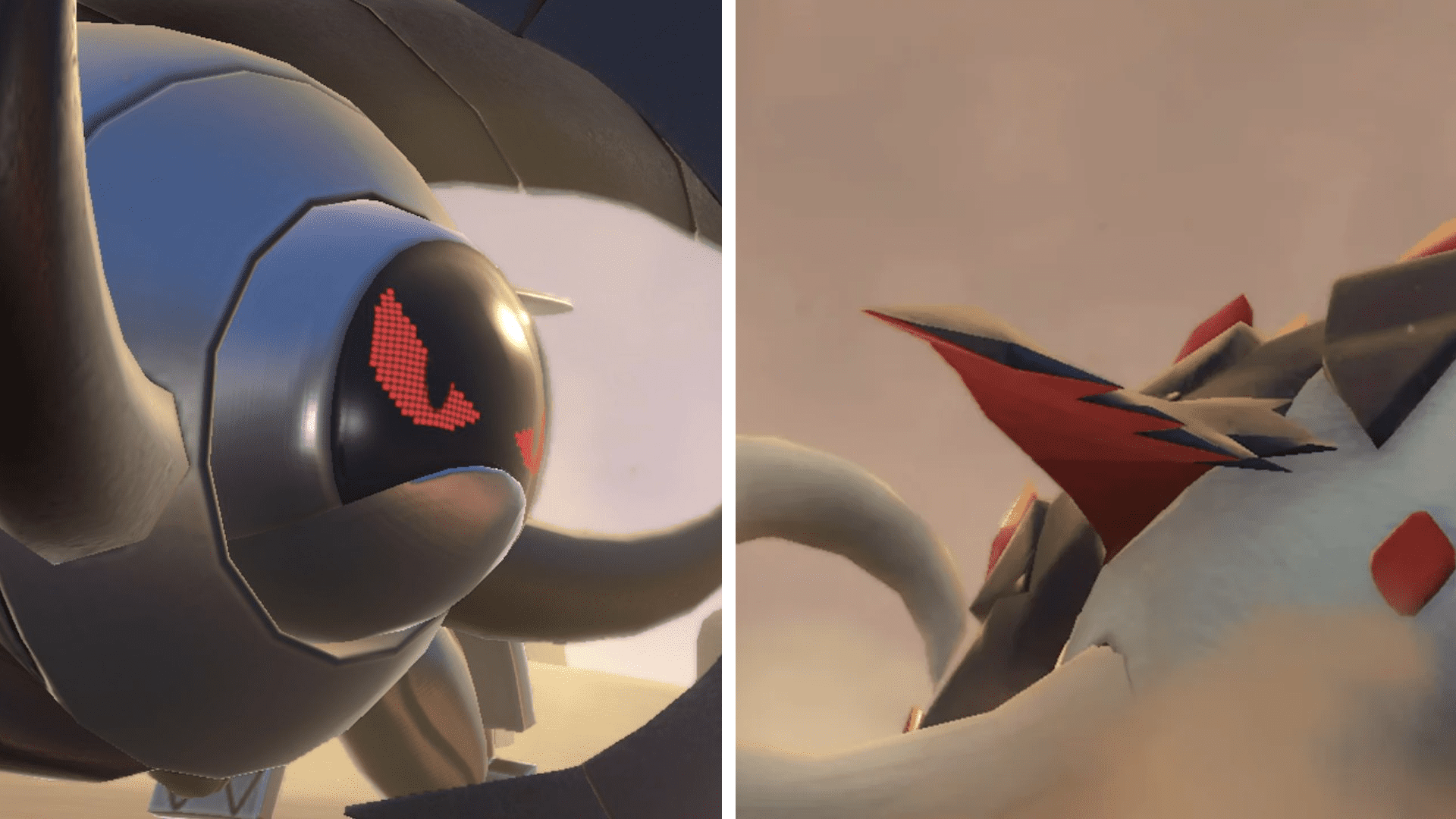 A new type of Pokémon has been introduced in Pokémon Scarlet and Violet with Paradox Pokémon – variants of modern Pokémon based on their past ancient relatives and technology-infused future versions. For example, Donphan has both a past and future variant, with the intimidating ancient Great Tusk and the metallic robot Iron Treads, respectively. There’s a lot of potential with Paradox Pokémon to explore the prehistory and potential futures of the Pokémon world and the creatures that live inside of it.

We really hope to see more of them in a future DLC, and that seems quite likely given the teases that exist in-game hinting at some legendary Paradox Pokémon yet to be discovered. We thought it’d be a fun creative experiment to imagine some of these new forms we’d love to see added to the game, so here’s a list of seven with ideas for either past, future or both variants. Feel free to get imaginative with us and add your own ideas in the comments below!

Now, Aerodactyl isn’t available in the base game of Pokémon Scarlet and Violet, but because we’re talking about potential future DLC then it’s entirely possible these Pokémon get added with it. Aerodactyl is a fossil restored from amber, but it’s entirely possible that restoration isn’t the true form of the Pokémon from millions of years earlier. The past Paradox form is from a far crueller world, and so that Aerodactyl would look far more intimidating. Think along the lines of the Mega form, but even more wild and scary.

As for the future Paradox form, we imagine the Aerodactyl of the future would be a lot smaller and more docile. There is no more fight for survival for Aerodactyl in the modern world as they are no longer wild Pokémon, they are restored from fossils. They don’t yet possess the ability to breed, but as time moves on and restoration technology improves, they would gain it. As they breed within the comfort of their trainer’s ownership, the offspring won’t need to be anywhere near as fierce or scary, and would mimic the real-world evolution of dinosaurs into birds.

The Electric/Bug-type Vikavolt is full of electrical energy, and according to the Pokémon Shield Pokédex entries, it even uses its pre-evolved form Charjabug as a spare battery. The theme of electricity is strong with Vikavolt, and that’s what the future Paradox form could play into. Similar to the Great Zapfish from Splatoon, a future form of Vikavolt could be much bigger and covered in wires, coils and batteries to maximise the amount of energy drawn from the Pokémon.

A past Paradox variant wouldn’t really be necessary for Vikavolt, but there are still some ideas we can think of. The Vikavolt of ancient times could have steam-powered bodies instead of electricity based on their environment and old human technology, similar to how Galarian Wheezing came to resemble a factory after exposure to them in Galar. We know that the ancient people in the Pokémon world used steam to power their Poké Balls, so this idea isn’t completely farfetched. No pun intended.

Since its debut in Pokémon X and Y, Talonflame’s Pokédex entries often make reference to its speed and ability to carry heavy objects in flight. It’s definitely capable of flying a human around in the sky, but what if it went further? Our crazy idea is a Paradox Talonflame of the future that has additional engines installed in its wings, similar to those found on Miraidon. With these boosters, it would have the form factor of a sci-fi spaceship, and could be an interplanetary courier Pokémon for humanity’s future.

There have already been a few variants for Mr. Mime, with the Galarian Mr. Mime and Mr. Rime in Pokémon Sword and Shield both giving a fresh take on the Kanto Pokémon. Mr. Rime takes on the form of a silent movie actor akin to Charlie Chaplin, a reference to the popularity of the comedian in the UK, the inspiration behind Galar. This had us thinking, what if Mr. Mime has always taken the form of popular entertainment at the time? If so, a past Paradox variant of a medieval jester Mr. Mime sounds wonderfully creepy to us.

Mr. Mime has been putting on a show for humans for years, and a whacky jester Mr. Mime totally sounds like something The Pokémon Company would come up with. As for the future variant, the only idea we’ve had is a chaotic influencer Mr. Mime, perhaps styled after V-Tubers, which are entertainers both in the real world and in Pokémon. The gym leader Iono in Pokémon Scarlet and Violet is herself styled after V-Tuber and web streamer aesthetics, so Mr. Mime could certainly find an audience there.

Banette is a doll that came to life after its grudge from being discarded took over and possessed it. It’s a wonderfully scary idea for a Pokémon, but stuffed dolls haven’t been around all that long. A past Paradox Banette could take a more traditional children’s toy of the past and turn it into spiteful, cursed nightmare fuel. Picture a shadowy, menacing unwanted wooden puppet operating independently from its strings. Creepy!

The Pokédex entry for Starmie in Pokémon Stadium says “this Pokémon may have come from outer space,” whilst the Pokémon Diamond and Pearl entry says it “sends mysterious radio signals into the night sky.” We have to wonder where Starmie came from, and that’s where the past Paradox form comes in. A Paradox Starmie could be far more extraterrestrial in its appearance, becoming less like a starfish and more abstract and weird.

The energy from flowering plants provides Florges with power. It devotes its entire life to the defence of flower gardens, as it “ruthlessly punishes anyone who tramples on flowering plants.” Now, imagine a future in which a changed climate and deforestation have rapidly reduced the number of flowers and plants in the Pokémon world. Suddenly, Florges is going to need to get a lot more intimidating to ward off humans. A future Paradox Florges could adopt the Ghost/Fighting-type, referencing how its flowers are dying and it evolving to defend itself and to protect what’s left of its flower gardens.

These were just a few whacky ideas from us here at GameLuster, but there’s plenty more out there. Let us know yours in the comments below, and keep your eyes right here on GameLuster for more gaming news and Pokémon coverage.