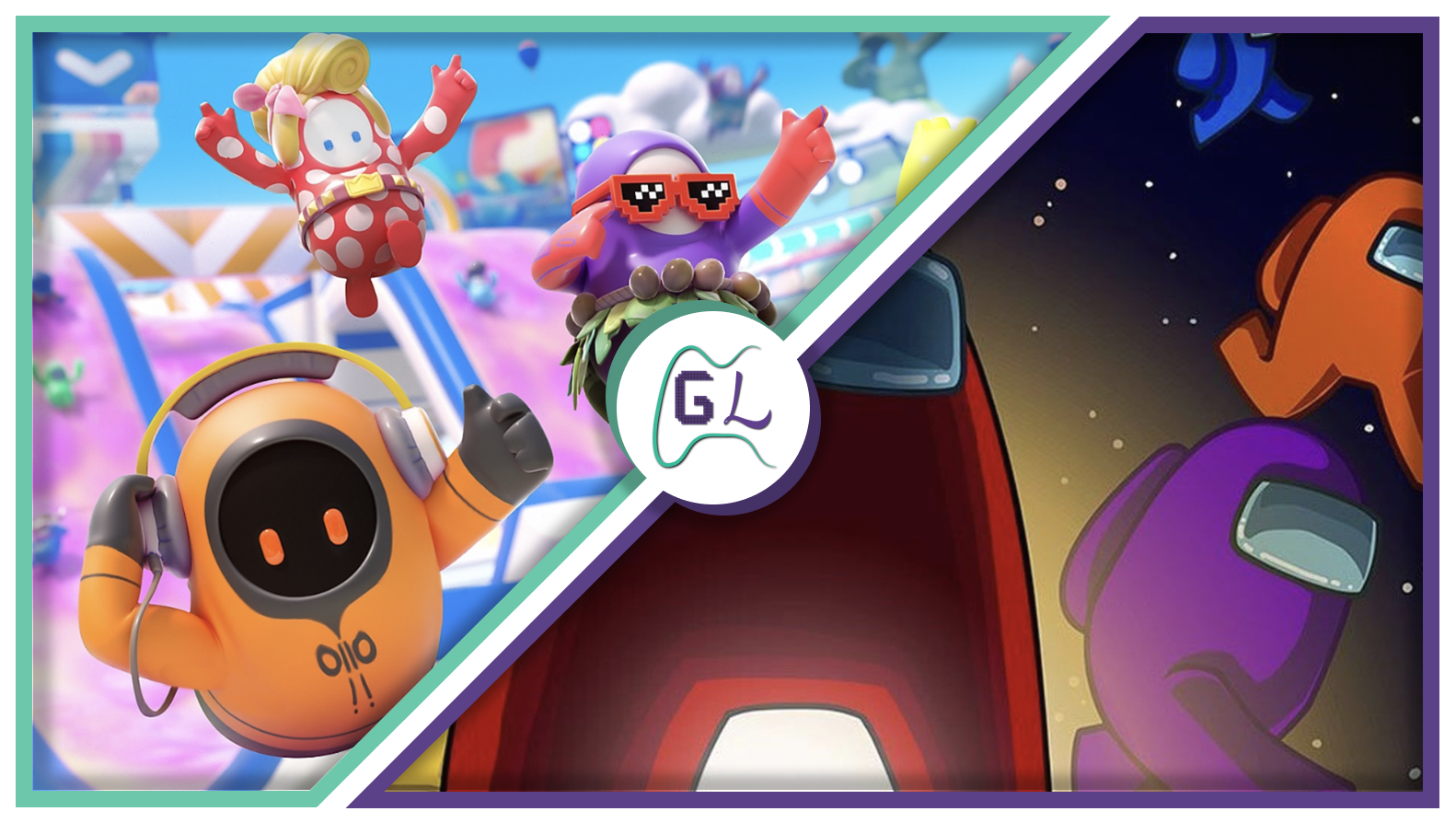 In 2020, both Fall Guys and Among Us (originally released in 2018) exploded onto the party game scene in style, as the summer of national lockdowns across the globe led gamers to these two titles in their free time at home. Both of the games have had periods of being called a ‘dead game’, and they’ve both had periods of restored interest. Two years later, after many updates, changes and memes, we thought we would run these two games through the GameLuster comparison machine and find out once and for all, which is better? As always, these comparisons will have all the objective stuff you need to know about each game, but our preferences are all subjective! The games offer relatively little in the way of story or audio, so this comparison will offer a new category of monetization.

We start with a basic introduction for those unfamiliar with each game – if you already know the background information, feel free to skip to the graphics section. Fall Guys (originally titled Fall Guys: Ultimate Knockout) is a 3D, 60 player platforming party game. Developed by Mediatonic, who is now owned by Epic Games, the game is playable on all current major gaming platforms except mobile and Mac. The chaotic obstacle course platforming of Fall Guys is heavily inspired by classic game shows like Wipeout and Takeshi’s Castle, as players race to be the first player to complete or survive various challenges. Originally a paid title, Fall Guys made a controversial switch to a free-to-play model, with new features heavily influenced by Epic’s own Fortnite.

The second title we will be looking at is Among Us, a 4-15 player social deduction party game developed by Innersloth, heavily inspired by the real life Russian party game Mafia. A number of players are chosen to be an imposter, seeking to sabotage the rest of the players, the innocent crew members, from performing tasks on their spaceship and completing their mission. Among Us is probably familiar to most internet users, given the way it dominated meme culture across social media for months after it found popularity in summer 2020. Among Us is playable on every current major gaming platform including mobile, Mac (via Apple silicon) and has a VR release in the works.

The major difference between these two graphically is that Fall Guys is 3D, whereas Among Us is 2D. Fall Guys features a simplistic, extremely colorful art style that prioritizes bright colors and making contrast between obstacles and the player extremely clear. The simplicity of its graphical design means that on almost all platforms it performs at a smooth 60fps, which is essential for timing jumps across platforms in the hectic competitive setting. The only platform that falls behind is the Nintendo Switch, which has a consistent yet slightly disappointing 30fps. This may be a worthy sacrifice for some, as Switch is the only console that allows Fall Guys to be played portably. The colorful graphics make it potentially very engaging to younger gamers.

Among Us also has an incredibly simple yet effective art style, as it has a hand-drawn 2D aesthetic. The art style practically screams 2000s web-based Flash game, and that makes it entirely welcoming to everyone. That being said, the killing animation can sometimes be a little graphic for children. Due to just how basic the graphics are, performance is perfectly smooth at 60fps on the majority of playable versions. The strength of your hardware may impact performance, such as an older iPhone or a low spec PC.

Both Fall Guys and Among Us are based on other, real-world games. As such, the gameplay of both revolve around having fun and being skilled to win. Fall Guys is far more varied, as it consists of many different types of games. The game modes can rotate and change out per season, but it offers everything from volleyball, obstacle course races, last one standing on a platform, shape-matching puzzle games, playground-style tag games and more. Completing a round faster than others will get you a higher score, and those who lag behind get eliminated. This continues until a special final round begins for the remaining few players, and the victor of that is given a crown. Crowns used to have a lot of value for purchasing special skins, including collaborations with other gaming franchises. Since the free-to-play launch however, crowns grant set rewards at certain milestones but have far less value.

Fall Guys does have multiplayer to team up with up to three other people, including a duos and a squads mode. Whilst playing with others is fun, it can also be played entirely solo against 59 other random players. The variety of gameplay in Fall Guys combined with the ability to play solo makes it perfect for players who want to play lots of different minigames by themselves or with friends.

In Among Us, whilst playing as a crew member you must complete very short minigames, typically of only a few seconds, as you navigate your ship and seek to repair its systems. These minigames are extraordinarily easy, with the challenge coming from being able to survive and not be killed, or accused of being an imposter. The imposters therefore face the opposite challenge, they must kill as many of the crew members as possible to stop the ship from departing. Among Us also now features special roles to make playing as a crew member or imposter even more enjoyable. These roles include the shapeshifter imposter who can transform into other players to frame them, the engineer crewmate who has access to traveling through the vents like imposters do, the guardian angel ghost who can stop a crewmate being killed, and the scientist who can see the vital signs of players at any time. Whilst the introduction of new roles and maps does add some variety to the game, it is still the same gameplay every round. The enjoyment to be found repeating this can be variable, though.

The gameplay of Among Us is much more dependent on other people. As the game is built around its social element, the main goal being to be as convincing as possible to your teammates, playing solo with strangers can be very hit or miss. The chat can be anything from annoying to toxic, and trying to plead your innocence to a crowd of strangers can be awkward and frustrating. This is why the game is best played with friends. The necessity of lying on the part of the imposter combined with the accusations towards innocent friends makes for an extremely funny experience. Among Us is definitely best played with those you know, although it can be occasionally fun to play alone.

As both of these games are live service titles, receiving regular updates and new content, it is only natural in the current state of the gaming industry that these games are monetized. The monetization of Fall Guys is, in my opinion, particularly egregious. The game used to be a paid title which players could then purchase cheap, silly and generic skin packs, but nothing major or substantial. Now that the game is free, it uses Show Bucks, a complete copycat of Fortnite’s V-Bucks, even down to the amounts and pricing. Any skin that is particularly interesting is probably now a paid skin, either through the Season Pass or through the item store using your Show Bucks. Show Bucks can be earned in the paid Season Pass, but you only earn enough to be suspiciously short of the amount needed for two regular 800 Show Bucks outfits. A much longer and detailed rant about the implementation of Show Bucks can be found here, but the main takeaway is that if you want to enjoy the crossover content that used to be free, you will now likely be paying real money every time. There is a free currency content section of the store using Kudos, but the selection is rather plain and pitiful.

Alternatively, the monetization featured in Among Us is far less obnoxious. This is what you would expect from a paid title, even though Among Us is very cheap in the first place. The item shop in Among Us has bundles of themed cosmetics, as well as both free and paid individual pieces such as hats, visors, skins, and more. The player can also buy Cosmicubes, a branching path of cosmetics which are all earned through gameplay, to make playing more rewarding. A free Cosmicube is offered to all players, and some can be purchased with the free in-game currency Beans. The rest use Stars, which are the premium currency found in Among Us.

The most expensive pack of Among Us Stars can be used to purchase far, far more than the standard Fall Guys Show Bucks packs, despite their similar price. $25USD/£20GBP in Among Us will get the player 300 Stars. If these Stars were spent on every single Cosmicube ever available, the player would get 104 cosmetic items, including a crossover with Netflix hit show Arcane, itself based on League of Legends. In Fall Guys, $32USD/£26GBP gets you 5,000 Show Bucks. This is enough for just four premium crossover skins like Master Chief, or six regular paid skins. The difference in value for money is pretty astonishing, especially as Among Us actually features a lobby to show off the skins to friends, which Fall Guys doesn’t have.

The better game out of the two is, in the opinion of the author, Among Us. The use of Epic’s monetization policy on what used to be free in Fall Guys is pretty disheartening, especially when the game’s relaunch was sparse of actual new features. What Among Us offers is incredibly unique in the video game space, and encourages communication between people that results in some hilarious scenarios. The ultimate decision about which of these games is better for you however generally relies on how you aim to play. If you are a solo player who likes variety, or perhaps you have children, Fall Guys will likely be a good time for you. The updates made to the game over time means it offers a lot of different minigames, and the fact that it is free-to-play means you can jump in without any worries. For a more unique and social video game experience with a player-friendly business approach, Among Us played with friends or family is the better choice.

Do you agree with our conclusion, or do you think it’s kinda sus? Did you play either of these games in 2020, and more importantly, are you playing either of them now? Whatever you thought of this comparison, your thoughts are welcomed in the comments below. For more comprehensive game comparisons to make your gaming life easier, keep your eyes here on GameLuster!