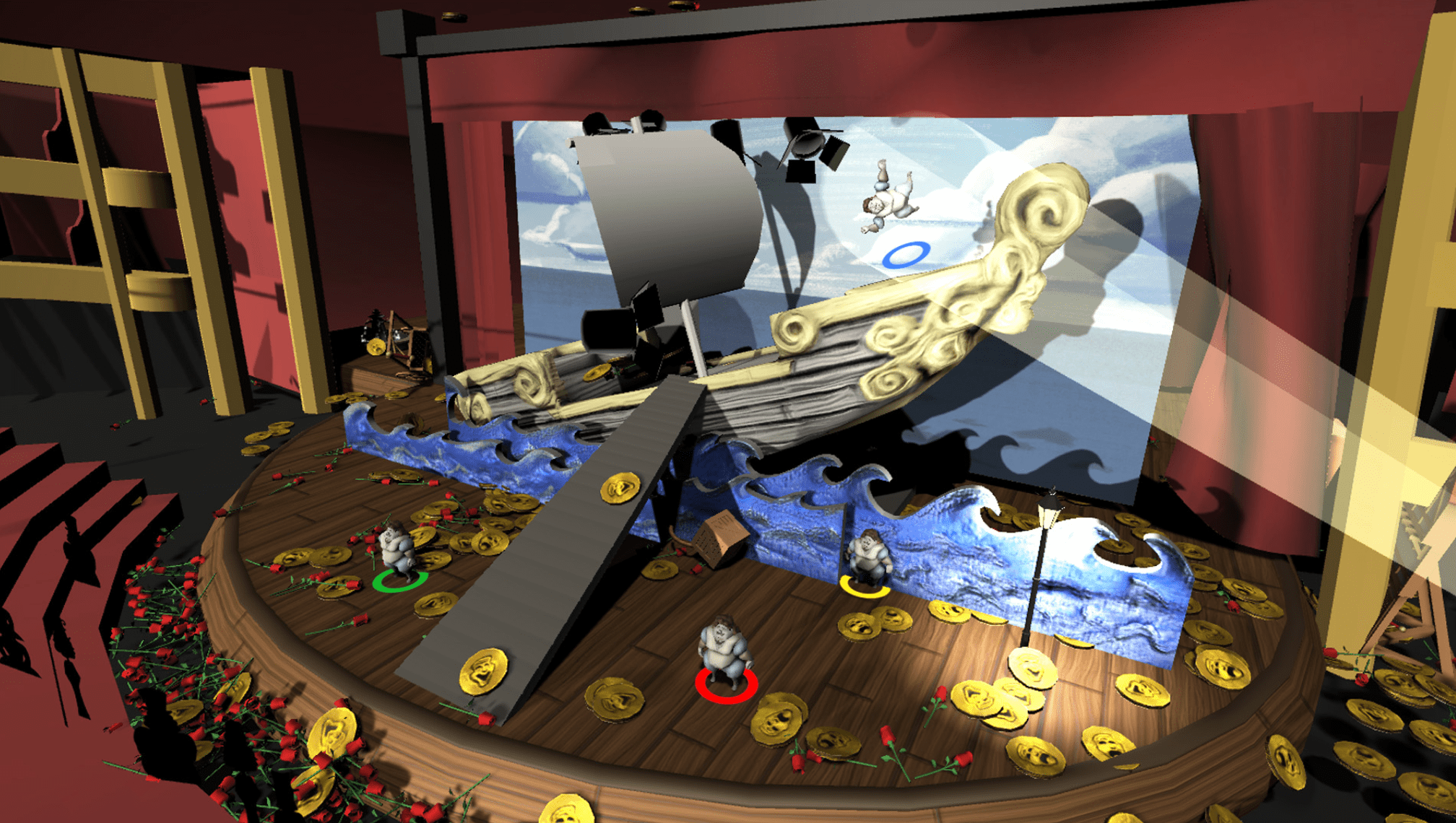 The stage is crowded. Five men – all of whom my fellow players have eagerly dubbed “thicc” in voice chat – scramble about, snatching up crowns, helmets and even fluttery white tutus to add to their costumes. They jump on and off of the ship prop in the background, firing paper “cannonballs” that somehow cause actual damage. They collect gold coins and roses that the audience flings in their direction. Most of all, they chase the spotlight which spontaneously appears and disappears somewhere onstage – and, if they manage to snag one of those elusive spotlights, they throw their arms wide, open their mouths and sing.

This is Super Opera Squad, a currently in-progress multiplayer co-op title by recent USC graduate Caleb Bladh. When I signed up for a chance to play this game at IndieCade 2020, I was told to expect fast-paced, chaotic, unpredictable gameplay – and Super Opera Squad certainly delivered.

Up to five players take on the role of the members of a struggling opera company. Each of the large, elegant playable characters is portrayed as an utter diva – eager to try on new costumes, grab the spotlight and sing their heart out. Unfortunately for them, singing is not their only job within the company, and the performers are also responsible for moving props, changing costumes, collecting money from the audience, and even defeating a rogue sea monster in a climactic onstage battle. The company wins if they manage to secure enough funding (in the form of gold coins) before the performance ends, but beware – an audience whose “entertainment meter” has fallen too low will not be inclined to reward even the best performances.

Despite the elaborate opera house setting, the controls of the game are refreshingly simple – good news for me, as fast-paced games aren’t my “aria” of expertise (Sadly, when I tried to make this pun during the gameplay session, it didn’t land at all). Characters can jump, dance, grab onto items and, of course, sing! Jumping and grabbing are used to interact with props, while singing and dancing earn money and support from the audience. Singing in a spotlight is the best way to gain lots of coins, but some of the randomly spawning spotlights will only reward performances if the singer is wearing a certain costume. Our session only had a few costume options – namely a crown, a knight’s helmet, and a tutu – a fact which I found myself quite grateful for as a first-time player, as many of the costume-requiring spotlights did not stick around for very long.

Super Opera Squad reminded me a lot of other fast-paced co-operative games such as Overcooked, in that communication between players was definitely recommended if you wanted to earn as much money as possible. (Unfortunately, myself and my fellow players spent most of our time running around checking out all the cool props and seeing how high we could jump, so there wasn’t much teamwork going on). I did like how the game provided options for playing both cooperatively and competitively – while your goal was ultimately to earn a certain amount of money together as a company, you can also try to earn or collect the most coins yourself. Bladh – who participated alongside us and scored quite a few coins of his own – indicated that he plans to add awards and achievements for individual performance in the future.

As it’s still in the development stage, Super Opera Squad definitely has a few areas which could do with a little bit of improvement. Because all of the characters are wearing the same outfit, and the slight color variations can be difficult to notice under the harsh spotlight, I more than once lost track of where my character actually was on stage. Additionally, the “boss fight” against the sea monster was especially chaotic, because the majority of the characters were crammed onto a small portion of the stage (the giant ship set piece) which made the difficulty of locating my character even more prominent.

Barring these small areas which could use improvement, Super Opera Squad is an absolutely delightful experience. If I had to identify just one element to be the game’s strongest point, it would have to be the atmosphere. The stage and costumes are elegant, and the objects are real and physical with great stage presence despite being made (in-universe) out of paper and other temporary materials. The background music definitely created an atmosphere reminiscent of a night at the opera, as did the full-throated “Aaaahhh” which was heard every time a character sang. Hopefully, even more sounds can be added in the future to fully embrace the many types of vocal performance which you might hear at the opera.

Surprisingly, when I asked Caleb Bladh if he considered himself an opera fan, he responded with an enthusiastic “no”. “I like musicals, but I’m not super big into opera,” he told me with a laugh as our characters pelted the sea monster with cannonballs. Bladh explained that he had developed Super Opera Squad as his senior thesis at the University of Southern California, and was initially just one of several ideas he had. He described himself as the type of creators who began with a wealth of ideas, then narrowed them down based on which one he himself found the most fun. He was drawn to the opera because he felt that it was a setting which did not frequently appear in video games – and I’ve got to say, despite being a self-professed non-fan, he managed to recreate the opera experience pretty accurately!

Super Opera Squad is currently still in development, with a planned full release for PC to occur at a currently unspecified date. If you’d like to give the game a try, the build showcased at IndieCade, which features one complete playable level, can be downloaded via Itch.io. It is highly recommended for a night of chaotic fun with your friends and family. You can also keep an eye out for the game’s appearance at other indie events in the future.