“Super Smash Bros. for Nintendo 3DS” was released last September in Japan and last October overseas. We announced at the last Briefing that the number of sales was 3.22 million units by the end of last September and it reached 6.19 million units by the end of the last year.
Before the release, some were skeptical of the sales potential of “Super Smash Bros.” for handheld devices because the series had been popular for home consoles, but the steady sales of the title even today have proven it untrue. The quality of the title has also been highly praised.
The “Super Smash Bros.” series is not as popular or well-known in Europe as in Japan and the U.S. This is why the initial sales of “Super Smash Bros. for Nintendo 3DS” were not strong in Europe. As the time goes by after the release, however, the sales have picked up thanks to word-of-mouth.

We have sold 9.35 million units of “Pokémon Omega Ruby” and “Pokémon Alpha Sapphire,” which were released worldwide last November. The sales total is smaller than that of “Pokémon X” and “Pokémon Y,” released in the previous year, as the release date was more than one month later in the year. We are confident that we have a chance to continuously sell “Pokémon Omega Ruby” and “Pokémon Alpha Sapphire” even this year. We will try to have as many people as possible choose them as a standard title. Before the release, some said that these titles were nothing but remakes and that their sales potential was smaller than completely new titles. We hope to produce results that surpass such expectations.

We released “Tomodachi Life” in the overseas markets last June, which is the title released as “Tomodachi Collection: Shin-Seikatsu” (Japanese title) in Japan in 2013, and the global life-to-date sales of this title reached 3.96 million units. 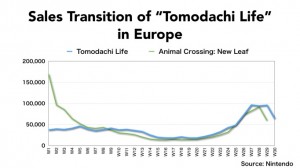 It is interesting to note that the sales pace has been steady in Europe in particular. This graph compares it to the sales transition of “Animal Crossing: New Leaf,” which was released in almost the same period of the previous year. In the overseas markets, “Tomodachi Life” had to make a start as a little known and entirely new IP because the original “Tomodachi Collection” for Nintendo DS was not available there. For your information, this graph shows the weekly sales of each title through the end of the year and the number of weeks for “Tomodachi Life” is one more than that for “Animal Crossing: New Leaf” as “Tomodachi Life” was released one week earlier in the year.
As you can see, “Tomodachi Life” has sold steadily for a long time. The sell-through of the two titles including their digital versions until the end of the calendar year of the respective releases are on the same level: 1.28 million units for “Animal Crossing: New Leaf” and 1.22 million units for “Tomodachi Life.” Considering the difference in their brand awareness and initial sales, it is fair to say that “Tomodachi Life” has achieved good results. It is also notable that the sales in one European country, France, have surpassed those in the U.S.
We can make Nintendo 3DS a more widely received platform by realizing the market potential of such titles as they have fewer competitors in the video game industry and more appeal to female consumers. Actually, “Tomodachi Life” and a pink Nintendo 2DS succeeded in attracting young female European consumers to the platform in the year-end sales season. With the help of the hit “Tomodachi Life,” Nintendo 2DS has made its mark as an entry model in Europe, constituting nearly half of the sales of Nintendo 3DS hardware in the year-end sales season.