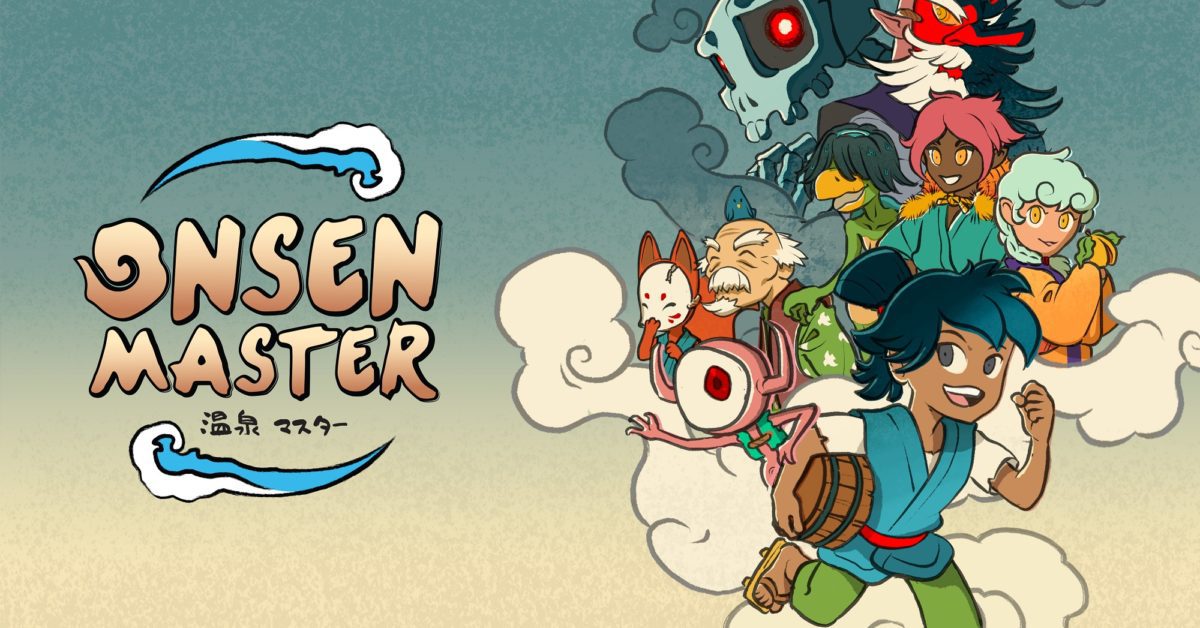 There’s a place for all kinds of games in modern times, but arcade-style games have found a hard time finding their slot in the wider gaming landscape of 2022. More often than not, they’re mobile games now. This is sometimes to great success, and sometimes to microtransaction-ridden failure. A good arcade game, like this year’s excellent Poinpy, can usually stand out from the crowd. Well, Onsen Master is decidedly part of that crowd.

Onsen Master‘s story mode places you as Mu, a young up and comer trying to take over the family’s onsen (Japanese bath house). There are five color coded ingredients that can be used to make the bath soap – white, blue, red, yellow, and green. When a round starts and a customer walks in, a floating color above their head indicates which kind of bath soap they’d like. Holding down the LT and RT buttons on the controller for the left and right hands respectively, you simply grab the next needed ingredient out of the barrel, bring it to the mixing station, and rotate the right stick very quickly to mix it. You then dump the ingredient in one of the open baths by releasing the trigger near it. Then, grab the customer, and hold one of the triggers to grab their hand and lead them to the appropriate bath, releasing it to let go of them.

That’s the crux of the game, but of course there are added layers as you progress. Kappas and other features of mythological Japan will enter as customers alongside the humans, but will cause havoc if left unattended for too long. Kappas, for instance, leave a sticky goo as they run around that makes your movement much slower, and you have to clean that up by holding down X and dropping whatever ingredient you’re holding. If you drop the ingredient for too long, it vanishes. After three people use a bath, it requires being scrubbed by jumping in and rotating the right stick very quickly before it can be used again. You’re playing for points, so try to get as many customers through the onsen as possible. And that’s the game!

Firstly, the controls feel terrible. Do not attempt to play Onsen Master with mouse and keyboard; only misery awaits you. Even with a controller as recommended by the developers, the whole thing feels janky and slow to respond to inputs. Mu does not seem to move where I want him to and spins around much too quickly. Coordinated control is actually very important here, especially when moving between screaming Kappas and over slimy floors, so the less than stellar controls are felt immediately. I understand where the idea to use holding the triggers as a device to open and close your hand came from, but it feels pretty bad to do, as does rotating the sticks so frequently.

And outside of that, I got bored about a minute into the first level and none of the added mechanics or bosses in later levels managed to capture my interest. The story isn’t very long, and there’s an endless arcade mode if you’re having fun, but the charming characters who sometimes show up did little to alleviate my disinterest in what was happening. The music is nice and loops appropriately, reminding me of older games I actually played in the arcade as a kid, but doesn’t really stand out.

It’s hard to criticize Onsen Master too much because it knows exactly what it is, but frankly there are a dozen better arcade games you could play on your phone right now – for free – instead. In fact, most of the titles on Apple Arcade are good enough that they can keep that itch scratched forever without resorting to the mediocrity of Onsen Master. This game is not offensively bad by any means, but all of it feels amateur and none of it is memorable. Perhaps this fledgling studio’s next project will be a little more ambitious, but as of now I feel that if someone asks me about Onsen Master two years from now I won’t even remember I’ve played it.

Onsen Master has nothing on offer that dozens of free mobile titles can't provide you. At the end of the day, this innoffensively boring game simply feels bad to play and will likely be forgotten soon.

4/10: Cloudy - Nirav Does Not Recommend
About GameLuster's Reviews