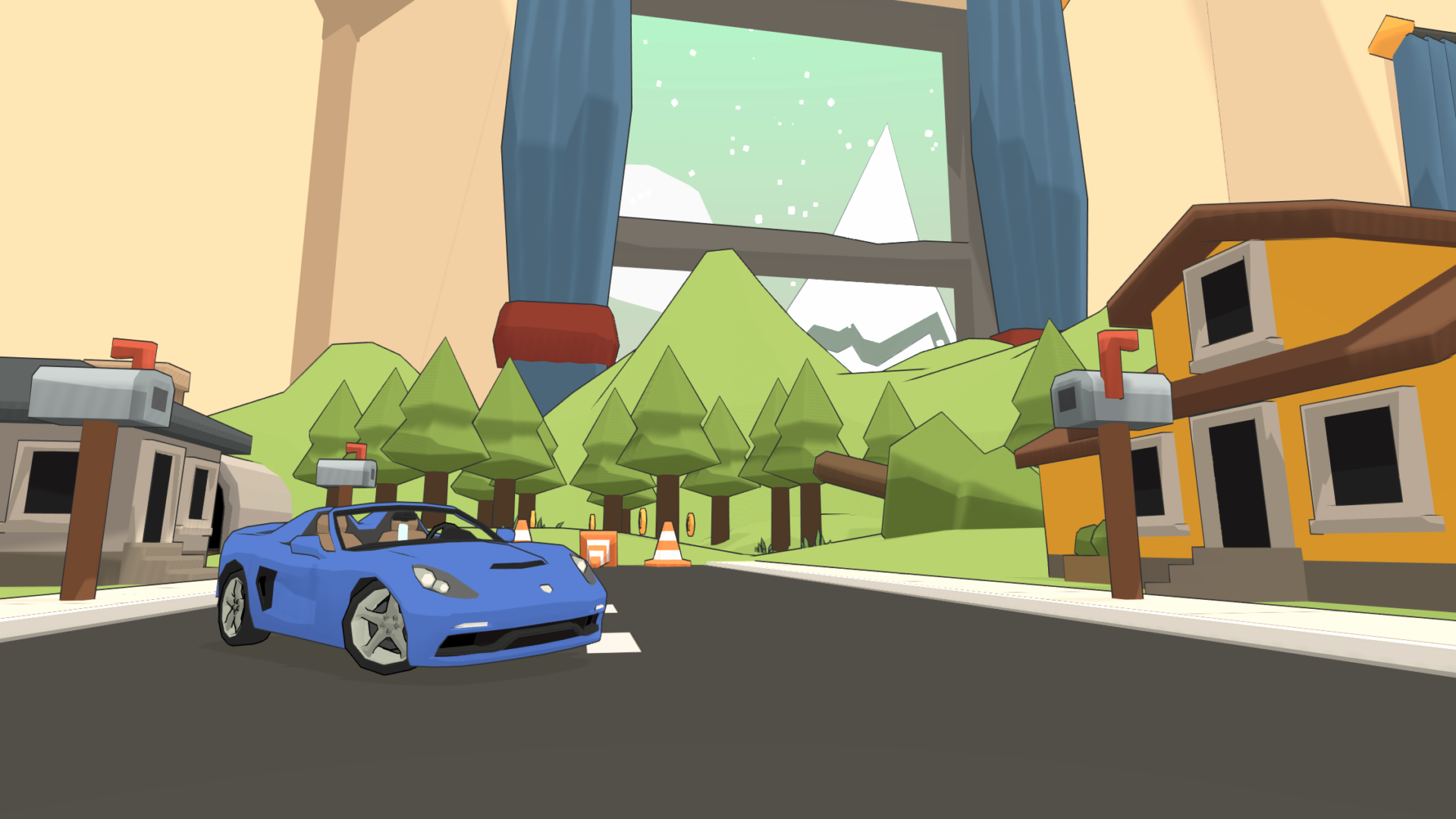 Pocket Wheels is an open world racing game set in the scene of a kids bedroom (at least the first level dev is). Being developed by Florian Wolf, Pocket Wheels is turning out to be a great little racing game to explore. This game is perfect if you’re craving some racing games, but prefer something more lighthearted and goofy.

The demo isn’t terribly long, about an hour or so, but a lot of cool ideas were already taking shape. Most of Pocket Wheels consists of exploring the world and completing races or timed challenges. You play as a toy car (or a T-Rex on a hoverboard, or some other small vehicle of transportation), with abilities to jump, glide, boost, and swing around on your grappling hook.

The amount of abilities you have may be a bit too much. The problem shows itself when you realize you have to press multiple buttons at the same time. Gliding is okay, just hold the spacebar, but you also have to glide while grappling, and also boost at the same time? It’s like doing finger gymnastics. Albeit I was using a keyboard, where the preferred method was a controller, but plugging in a controller didn’t seem to function properly. The buttons for the controller and keyboard were not laid out optimally; there was too much work required from one hand.

The level design offered some secret routes to explore, with the space within the level maximized so there never felt like empty space (which is what you see in a lot of open world games). I hesitate to say Pocket Wheels is “open world.” Perhaps it’s safer to call it non-linear, as in there’s no specific race you have to do next. You can easily explore the world without having to do a race, though you will need to complete some challenges if you want to move the game ahead.

Some of the challenges were a little too tricky. There was a point where I had to run into robots that were firing lasers at me. The only problem was the robots destroyed my car before I could get to them because their lasers were on me constantly. Perhaps if there was a delay of when the robots locked onto me so I was given a chance to move out of the way? That was the only part of Pocket Wheels that felt a little unfair, and it required you to press another button on top of all the other ones you were pressing (why couldn’t it automatically lock onto targets?)

The art is colorful and cartoony, giving Pocket Wheels a lighthearted feeling to it. I wish in terms of navigation there was a little more art design in it, as it can be difficult sometimes to know where you’re heading. I stayed off my mouse most of the time because the camera was too sensitive, and it required another action I had to juggle. The missions took a while to understand what to do or how to activate them. I had to get really close to the signs and acknowledge them for the race to actually start.

I didn’t care for how the music was treated in Pocket Wheels. I would’ve more preferred audio written specifically for the game that would change dynamically, but here it was treated as more of a radio. The intense electronic music separated itself from the world, as I was expecting more ambient sounds of a room, birds outside the window, light piano or percussion playing in the background. The current music made me confused on what direction the theme was going in.

Having a radio-sequel music background also made me have to press more buttons. Why couldn’t my car move forward automatically when boosting or grappling? Swinging was also a problem, as I couldn’t figure out my momentum with the car (if I had any). Perhaps the camera should zoom out at those points so I can accurately determine where I’m going.

In summary, Pocket Wheels introduce a fun miniature world to explore with its plethora of gadgets and cars. With all these features, it became a little bit overbearing, but ultimately I’m excited to check out more levels.

Jordan played Pocket Wheels on PC with a demo acquired free on Steam as part of Steam Next Fest.