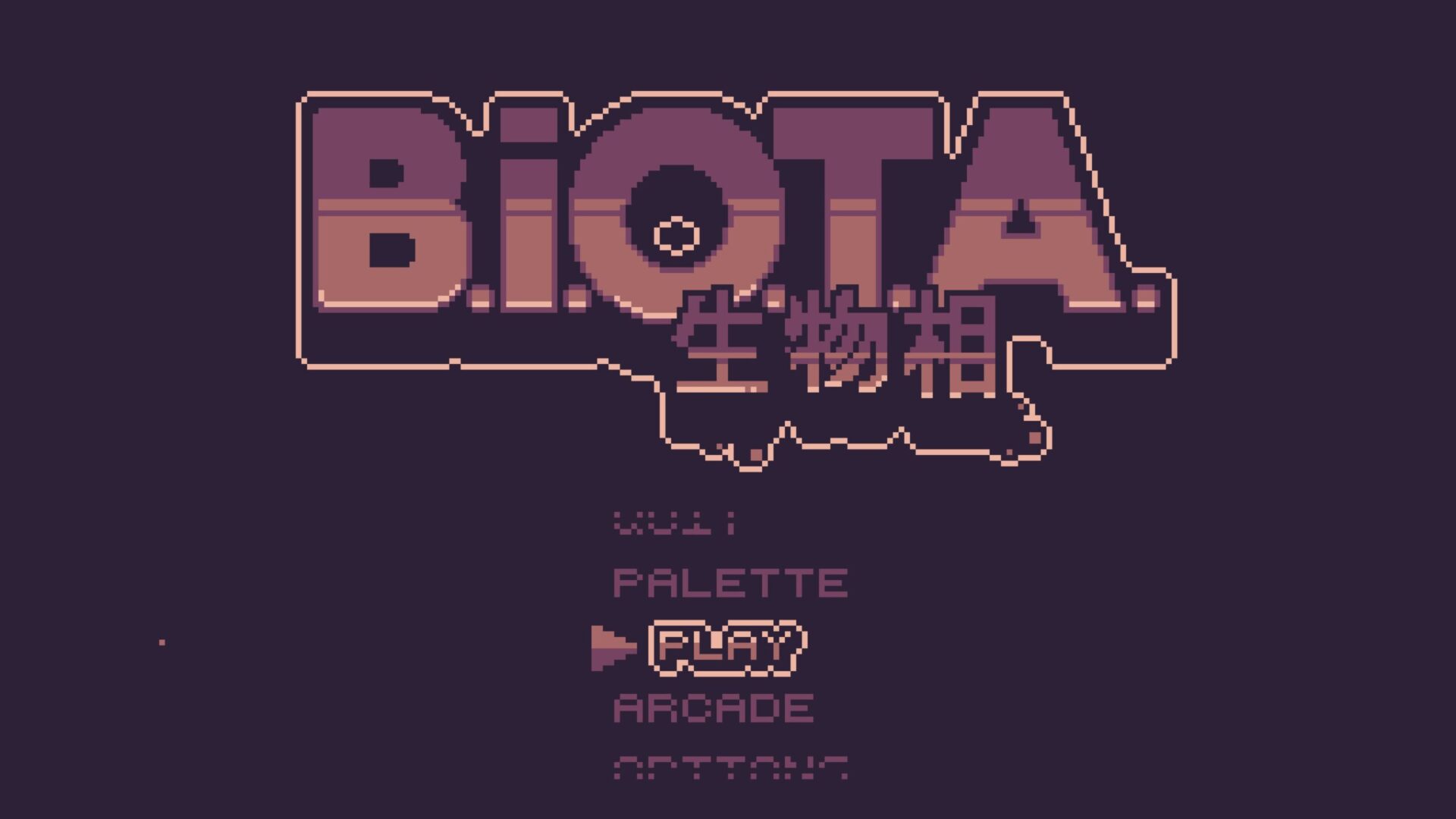 Oftentimes, nostalgia is much better, or at the very least different than memory might have you suspect. For example, despite movies where a team of hardened marines must fight an kill overpowered alien combatants seem emblematic of the 80s, there were surprisingly very few in the 80s themselves, with a much larger bulk coming in the 90s and beyond. Similarly, the Gameboy and its 4 tone screen reek of 80s design charm, but the handheld came out in Japan and the US in 1989, and wasn’t even in Europe until 1990. I bring these points and these facts up to explain that B.I.O.T.A. and its plot, its aesthetic are not a reflection of the reality of what 80s alien fighter movies or early Gameboy gameplay was like. Rather, it is a reflection of how you might remember them through the rosy lens of nostalgia, only it’s been made real. And now.

B.I.O.T.A. begins and immediately gives you its backstory in the form of 80s and 90s era attract mode still images that explain that in the future, all of earth’s energy needs are taken care of via a wonder element – Viridium – that fell from space and is now being mined from a remote space asteroid that has recently fallen under some form of attack, and so a crack team of commandos is being sent to quietly deal with the problem. So naturally it’s a bit of a leap to discover that the game itself begins in media res with the asteroid on a collision course with a black hole and one of said crew desperately trying to rendezvous with his escape vehicle before its too late, only to jump backwards in time to when that team lands on the asteroid and begins their exploration. At the start you have four playable characters to choose from, distinguished from each other primarily by their choice of primary and secondary weapons – upgrades you find and buy carry over between characters except for weapons, so everyone benefits no matter who explores – but several more can be found and on occasion bought as you traverse the asteroid’s bizarre enemy infested depths.

The early part of B.I.O.T.A. progresses a little slowly, in that you have to actually explore, discover the paths from the starting area into deeper areas, unlock quick access points around the map, and discover what items and characters you need to find and/or buy to actually progress further. Of course, you start the game only being able to carry so much Viridium, the mineral that the game’s various shops accept as currency, so part of your search will involve going around and looking for the wallet upgrades, which might sound irritating, but nearly all of these are in plain sight or just off the beaten path and can be picked up with a little bit of clever routing and platforming. The lack of a detailed map does make remembering where each black market is located a little more difficult, but you can reach all of them from nearby elevators without too much trouble. The most irritating moment in this regard comes when you need to remember where the purchasable robot character is located so you can use it to rush through a horrifically irradiated overloaded reactor that no other character can survive in a sequence that feels like a warm love letter to Metroid‘s spectacular escape sequences, or the reactor meltdown sequence from fusion, if you don’t mind me getting to specific.

The last collectible type – after Characters, special weapons, max special weapon ammo upgrades and health upgrades if you’re keeping track – is specimens. These unlock new pallet options for the game, which makes this a perfect segue into the graphics. B.I.O.T.A. is a game that leans hard into its retro aesthetics, including a 4 color pallet. Note that this is not 8 bit color, or even 4 bit color,  but 2-bit, like the original gameboy, or CGA graphics if you want to go even older. So to make up for this, each specimen that you find opens up a new color pallet to select from, in addition to the variety of starting pallets that include the Gameboy and CGA color fonts if you really want to feel retro. If you’ve noticed that my various screenshots are in different colors, that’s the pallet option at work You can also have the game auto-select pallets for you each time you enter an area or reload a game. Of course, don’t let the minimalist color pallet fool you, the environments and monsters are absolutely lovingly drawn, boss monsters especially look spectacular and believable as horrific monstrosities that want you dead or worse.

Of course, all of this and I have barely talked about the gameplay, well, save the best for last as they say. Your jumping, including your wall jumping feels tight and responsive, each hero’s weapons feel like they have a purpose somewhere, what backtracking there is is made fairly painless by the plentiful fast travel points and save-anywhere-safe feature that lets you save in any spot in the game so long as the room you’re in is free of monsters and you are not being harmed. B.I.O.T.A. is perfect for pick up and play gaming in quick chunks during breaks or for long marathons. Every challenge feels fair, and while bosses are absolutely difficult, they the sort of bosses you can learn and adapt to, with understood patterns you can learn and adapt to.

Take control of a bevy of parodies of 80s action heroes in this glorious retro-inspired Metroidvania title.