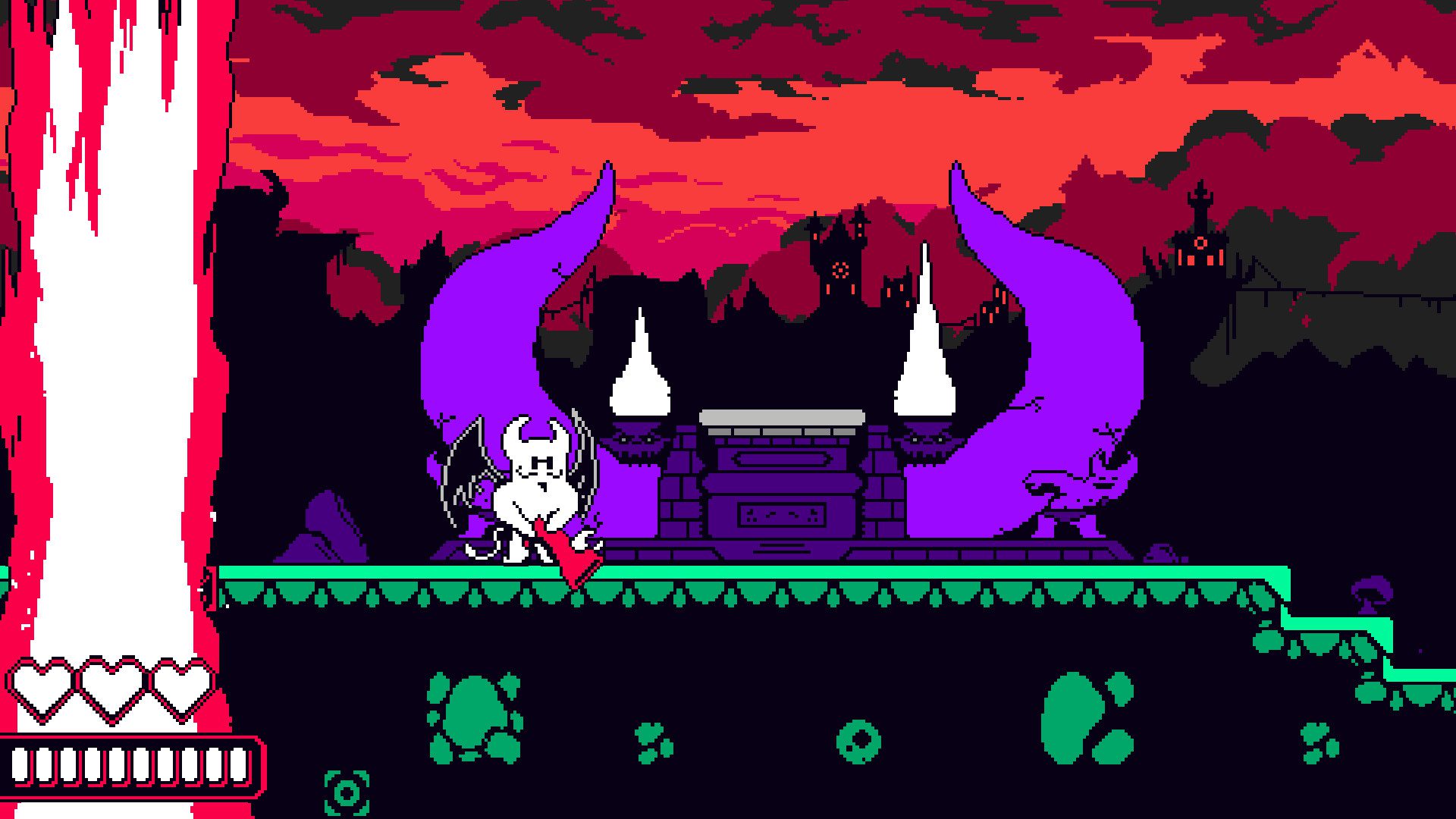 Smash! Boom! Crash! Do you like guns? Do you like explosions? Do you like sheer amounts of profanity and zaniness that only the lower pits of Hell can provide? Well, I got a game for you. Gun Devil is a hectic side-scrolling shooting platformer where you go on a quest to save your demon wife from the prince of Hell. Developed by Agelvik, Gun Devil fulfills your rudimentary need to break things.

Gun Devil emphasizes how well you know the game controls. I played on the keyboard (because the controller input wasn’t working, unfortunately), which is pretty tricky to get used to. The WASD is movement, but W only makes you look upwards, which tripped me up a few times. The spacebar allows you to jump and hold it to hover. The shooting and other abilities are done with the arrow keys, where left is fire, right performs a dash, and up throws an ax. My gripe with this layout is that typically arrow keys are meant to be directional, but the direction in which you perform attacks is based on how you’re facing in the game. This means I couldn’t technically dodge backwards, I had to first press A to turn that way, then press the right arrow key. I think to make it less confusing is to have the powerups be J, K, and L as they don’t have a sense of direction assigned to them. This isn’t a game you can run into without mastering some of the controls. There are some more expert maneuvers, like slamming on the ground and jumping again to vault up higher, but the timing on it is kind of difficult. Luckily Gun Devil doesn’t have too many spots where it has to be performed.

The levels, and the game itself, are pretty short. It took me maybe an hour or two to complete, but it could be longer if you want to fully complete everything with all the medals to collect for killing every enemy and not taking any damage. There are a lot of different enemies introduced that have their own way of attacking, so most likely you will die a few times in Gun Devil. Money earned is not lost when you die, and you can typically transport to a different level to practice your skills. Restarting a level is quick, making the act of repeatedly dying less cumbersome. Fighting the creatures in the levels were a lot more enjoyable than the bosses (there’s only two). They both had their own frustrations, but the second boss you could hug the opposing wall and spam the fire button to kill it. There are multiple weapons you can use, but don’t expect one is more powerful than the other just based on the price tag. Each gun has its own strategy about it. My favorite was the one that shot trash everywhere because it would bounce around the screen, hurting enemies multiple times.

The story can be a little rough at times. I understand that this is supposed to be Hell with all its profanity and sins, but the conversations can feel forced and awkward. It has a lot of the derogatory “boy’s locker room” talk, and for a game where the mechanics are really fun, it’s just unnecessary. Perhaps I’m not the crowd that Gun Devil is for, but Doom had a lot of crushing and smashing in Hell and didn’t need that kind of dialog to get its point across.

Agelvik has a kind of style to their games, and continues it through to Gun Devil. The game is all pixel art, but juicy, where it has a little animation for any reaction. Important characters and enemies are big blobs of white pixels with black facial features, it makes it easy to tell them apart from the colorful background. The background was kind of tricky at times, as what I thought was a ledge or wall was actually the background that I would pass over. If my player is supposed to be in a cave-like structure, don’t make the background also look like walls and floors. The characters in Gun Devil are all goofy and wacky, especially the capybara of wisdom that you chat with at random points. I would’ve liked more of these fun little interactions, but the main character brushes conversations aside, so it feels pointless talking to anyone. Why have us speak to the characters if there was no reason to, not even story-wise? It feels like some fun moments were wasted with the choice of dialog.

Music drove the insanity of destroying buildings and wreaking havoc. The music had different states, so it was slightly dynamic, as the player would flip between menus and gameplay, and complete the levels. While there was a lot of stuff happening, the sounds never felt overwhelming or jarring. Overall a nice balance between gameplay sounds and music.

In summary: Gun Devil has fun gameplay, wacky art, and intense music; it just needs to tone it down a bit on the unnecessary profanity.

Gun Devil is available for FREE on Steam.

Gun Devil is a fast and furious side-scrolling shooter that’ll have your guns blazing for the little amount of game there is to it.