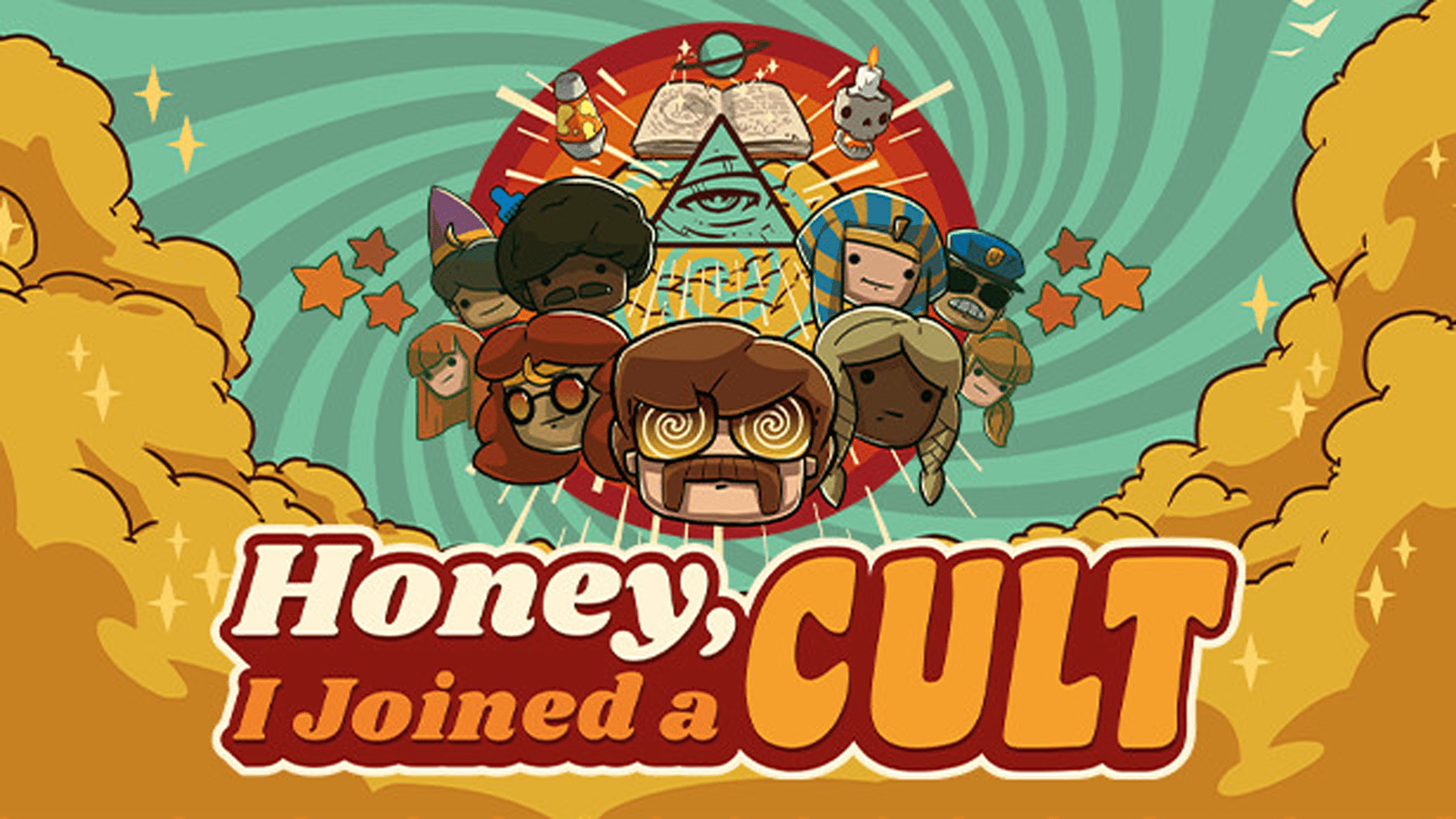 I’m pretty sure each and every one of us has played a video game that just gets us completely hooked. Not necessarily because it has an engaging storyline or fun to execute gameplay, but because the combination of repetitive tasks and non-stop rewards wins us over in a way we might not have even expected. This phenomenon can feel almost cult like which is immensely fitting for a title called Honey, I Joined a Cult.

Now despite the title, Honey, I Joined a Cult is less about joining a cult, and more about running your own. There’s a delightful opening cutscene showcasing an already established cult under attack by the authorities and protestors ready to take you down. Fortunately you’re able to escape through a legal loophole, but unfortunately now you’ve got to start from scratch by making a whole new cult to bring in people’s hard earned money and make it your money. Right off the bat, the cult customization is super cool. You design your leader, what uniforms your cultists will wear, the name of the cult, what deity they worship, what the followers are called, the religious symbols, everything. If this all sounds a bit too complicated, you can opt to use one of the title’s premade cults, which I did by choosing the option where everyone worships Santa Claus.

Things start out pretty basic and there’s a nice tutorial to get you started. You build a chapel, beds and baths for your cultists to use, additional amenities like a maintenance center to fix broken items and a kitchen to provide everyone with tasty nutritious low-protein gruel. Cultists balance their daily schedule between free time activities like playing backgammon, or going to work providing services to Santa Claus’ followers like giving them a nice dip in the maggot therapy tub.

The main charm of the game is definitely in its visuals, which is loaded with randomly designed people running about and spouting little phrases here and there. These are enjoyable if you stop to check them out, but if you play management games like me, you’ll be zoomed out and making sure the inner workings of your compound are running smoothly. The entire game is set in the 1970’s and they went all out with the presentation there from the logo to the menus, soundtrack, and more. The visuals are a simplistic and incredibly well done treat with this title and it’s sure to attract followers. Speaking of, the more followers you get the more influence you collect. The more influence you gather, the more you’ll be able to conduct research to upgrade equipment or go on more missions, which will raise your PR which will allow you to bring in followers of a higher quality.

There’s a constant numbers game in Honey, I Joined a Cult, which I think is ideal for this type of title. Nearly every single thing you improve will help you increase multiple things, and it all blends together in this hypnotizing, almost trancelike gameplay loop that definitely had me going “Just one more day.” Because it’s a great feeling seeing your cult compound grow. The money you earned today allowed you to buy everybody much nicer beds and while you were doing that one of your cultists finished the research so you could build a brand new Spirit Chamber which your followers flocked to which gave you enough influence needed to increase your total number of cultists and it just keeps going like that in a very satisfying sense of non-stop progression.

Nearly all your time is spent at the compound, but you can send cultists off on missions for experience points and rewards. Whether or not these missions will be successful is based entirely on their stats which you can raise whenever they level up by proving themselves to be diligent and loyal followers of the great Santa Claus. Missions are great, but if you do too many too often you’ll raise your heat level and may find yourself with a repeat of that intro cinematic with you being overrun by cops and protesters. The game runs itself pretty well, but the more I clicked and the more I discovered that I had control over far more than I initially thought. This made me realize that the team at Sole Survivor Games did a really nice job at making a management system that can appeal to both hardcore and casual players. It has a good sense of progression for the more casual and ignorant players like myself, but there’s definitely a more complex system on offer here for those who are able to min/max every aspect of their own personal systems.

Whether or not you’ll enjoy Honey, I Joined a Cult is sort of dependent on whether or not you’re a fan of this style of game. If you like in-depth management type titles then there’s definitely a lot on offer here. If you’re not into juggling resources and keeping track of all the microjobs that make up the main gameplay here, I can’t really imagine Honey, I Joined a Cult winning over any non-believers. But if you’re right in the middle of the road and you’re a newcomer to the genre or have been traditionally overwhelmed by far more complicated titles, I can definitely see this game giving you a nice safe place to rest your head. I definitely enjoyed my time with it, and will probably be diving back into it once my personal assistant is done shredding all the files and the cops are finished with their perfectly normal and routine inspection.

Honey, I Joined a Cult is a charming management game that definitely balances difficulty and fun. The graphics and humor are immensely charming while the soundtrack provides some nice funky beats in the background while you play. It may not do anything groundbreaking for the genre, but it’s still a fun time and you could be forgiven by your closest friends and family members for coming back to it again and again and again.

All glory to Santa Claus.

John reviewed Honey, I Joined a Cult on Steam with a copy provided by the developer.