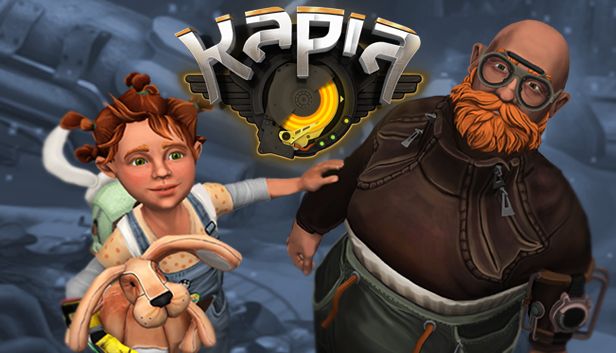 For people looking to relax and explore an interesting world full of mystery, robots, and puzzles Kapia, by 2for2 might be for you. Kapia is a point and click adventure based in an apocalyptic world where robots and humans live side-by-side. Help young Reny and her grandpa Stefan to stop the evils from taking over the city of Kapia!

At least…I think that’s what happened.

Kapia took me about four hours to play through, though if you aren’t directionally challenged as I am, it may only take you three. Within that time I witnessed interesting characters, sneaky puzzles, and a story that was more-or-less complete, albeit somewhat confusing. You start in the desolate tundra, most of civilization wiped out and dying from war. Kapia is one of the last remaining domes of humanity left. Stefan brings something back taken from one of the old domes, possibly a key to saving Kapia and stopping the war, but he needs to be careful who he trusts. Reny is trying to find Stefan to welcome him back home, but soon gets caught up in Stefan’s problems. I won’t reveal too much more story as to avoid spoilers.

The mechanics are your standard point-and-click: click on an area to move the character to, click on objects or people to interact with them, click on inventory items to combine/use them. Brings me back to the good old escape room flash game days, except not as tricky. Honestly I was worried that there would be objects unfamiliar to me, due to it’s wacky science fiction theme, but puzzles were typically easy to understand. Most puzzles involve either giving an object to someone or putting in some kind of code, but I’m overgeneralizing things. Some interesting puzzles involved water mapping and even deductive wordplay.

Speaking of wordplay, let’s talk about the dialog system. Surprisingly it plays a big part in the game, but it isn’t revealed to the player as such. One could theoretically not click on a dialog choice and be stuck in progressing forward in the game, as there’s no indication of what might happen or where the conversation is going. This means I got stuck in a few conversations that were going nowhere before reaching a turning point where I was tasked with a new goal. It’s not a real hassle besides a couple minutes of pandering, however specific conversations are important because the game does one thing that’s irksome for a point and click game: it doesn’t let you jump ahead.

No, no, I’m not proposing a speedrun-able version of the game. Point-and-click adventures are supposed to be slow and cozy, with you the player bundled in a blanket on your chair, using the maximum effort one finger and little bit of brain can do to click on objects and solve puzzles. What I mean is Kapia requires you to solve puzzles systematically. I can’t click and pick up a stick if I know it’s going to be needed later on, I have to chat up an NPC to tell me “Hmm, maybe if you poke it with a stick or something,” then backtrack to the point where I found the stick, which I’m now suddenly able to pick it up. I’ve played point-and-click games where you could pick up multiple objects, and the fun is wondering what you’re going to use them for. In Kapia I’ve had a total of maybe five objects tops in my inventory, which isn’t a bad thing. Less for my lizard brain to worry about, but the linear feel of the puzzles makes the gameplay feel more restrictive.

Nonetheless, while the straightforward puzzles are simple to understand, the story… isn’t. Kapia presents various ideas, but brushes them aside rapidly, giving the feeling like the information is meaningless. There’s an anarchy group, but also a cult, but also voting like a democracy. The problem might be the developers wanted the player to perform certain gameplay, but it didn’t necessarily fit the foundations of the story. The story then goes out of its way to justify why it made a sudden change. Perhaps the problem is the absence of build-up. As soon as a problem was presented to the player the resolution to that problem, or a new idea entirely, was given. It goes from Stefan saying “I think someone is following me,” to turning around and saying “Oh, are you following me?” Just odd story decisions that left me unsatisfied. I did enjoy some of the writing, however. Kapia likes to sneak in humor and charm where it can and I applaud it for that. If I could play as Reny the whole time I would have preferred it. Her character development and personality felt more solidified than Stefan’s.

If I were to suggest this game to someone it would be for the world design. The game was visually interesting to look at, and I wish I had more to explore. The robot design gave this dark and ominous feeling to the game, while juxtaposing it with bright wildlife, which I feel the game should have leaned into more. Stefan’s storyline had this grimy, cold, and scary feeling to it, while Reny’s was colorful and light-hearted. The art choices created a unique setting that will bring in players, like it did for me. Even the loading screens have these nice children’s drawings that the artist filled in with color.

I found myself humming along to the background music from time to time. I don’t believe the music was dynamic in any way, as in it didn’t change gradually or have a build up or climax when important turning points were revealed. It was more or less pleasant elevator music that changed per scene you were in. I had a problem with the sound effects, where the game would react to the player’s actions only sometimes. When you pick up an object as Stefan, a cool vibraphone and cymbals jingled a spy tune, but pickups by Reny emitted no sound. There are a LOT of voice actors for such a small production, which isn’t a bad thing, voice actors need jobs, too. There were just a lot more than I would have thought. The subtitles had a problem where they didn’t match what words the characters were saying, like one time the character said “hid,” but the subtitles said “hit,” which in context means something completely different when the character says “I hid that.”

I’m being nit-picky here, but honestly for a small team I think they should be proud of what they accomplished. Gameplay was fun: puzzles were interesting, a little straightforward, but tricky enough that I felt smart when I figured them out. Story was okay: it had a beginning and end, but got a little blurry in the middle. Art was cool: a solid theme with a world that kept me wanting more. Audio was good: Dialog was crisp and easy to understand and music fit the mood of the gameplay.

Jordan reviewed Kapia on Steam with a code provided by the publisher.

Kapia is a short and sweet point and click puzzle adventure. The world design and cast of characters were unique and interesting to interact with, however the storyline was mildly confusing and the dialog needs to be cleaned up more.