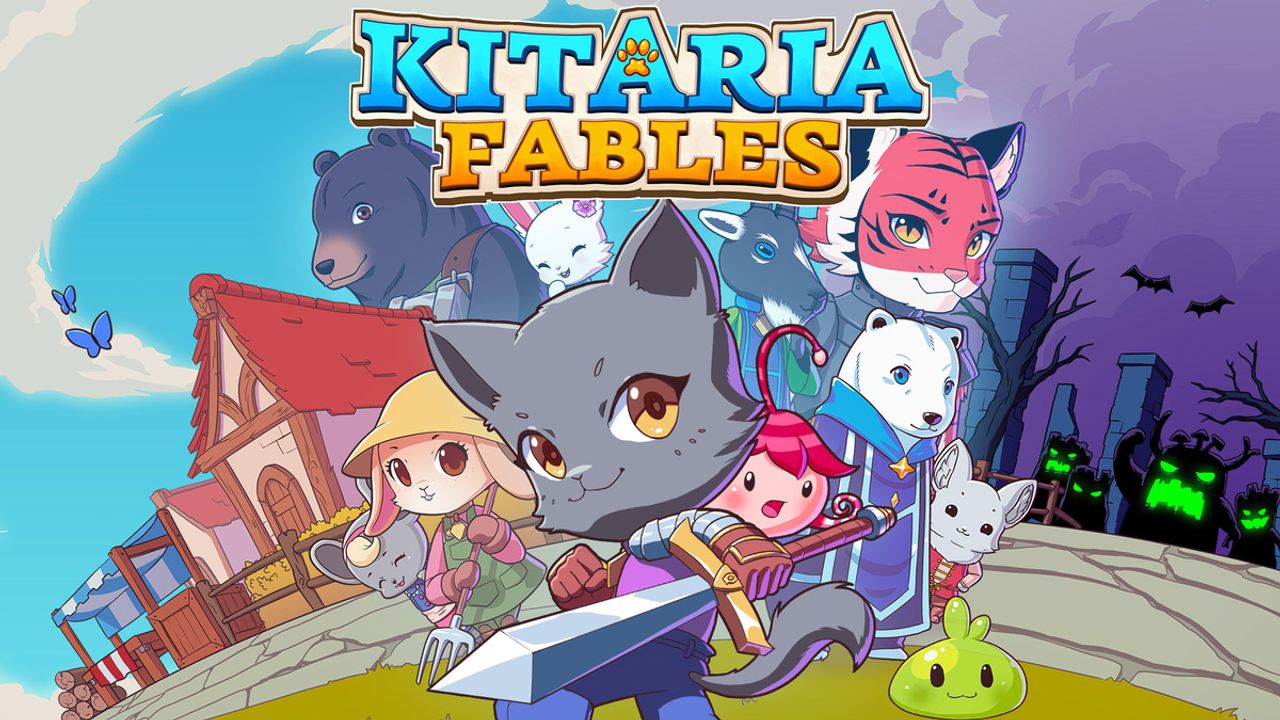 Nyanza (aka Nyan) and their friend Macaron thought the assignment to protect the residents of sleepy Paw Village would be an easy one. Fight off a few monsters, earn a couple Paw Pennies, and enjoy their stay at their relative’s old farm. Unfortunately, things are not as peaceful as they seem. Monsters are becoming aggressive again, Nyan discovers magic powers that could get them arrested by the Empire if they were ever discovered, and there are ancient relics to locate, quests to complete, and, of course, crops to harvest! What’s a simple cat to do?

Kitaria Fables is a cozy role-playing game with elements of farming, crafting, and cooking in addition to traditional monster-slaying and dungeon-exploring. Nyanza can wield swords, bows, and magic in battle as they explore the world searching for the lost relics that are causing the monsters to act up. Using Paw Village’s Thunderbunn Farm as a home base, they can prepare for their journey by farming, forging weapons at the town blacksmith, helping the local cook make delicious recipes, and generally completing various tasks and quests for the village’s residents.

There is a lot to enjoy about Kitaria Fables. It draws inspiration from genre standards such as Rune Factory, Stardew Valley, and the Story of Seasons series; fans of these games will likely find themselves liking this one as well. The split focus on farming, crafting, cooking, monster hunting, and dungeons means that players will have a wide variety of tasks to complete so they do not need to feel stuck doing the same thing every in-game day. While there is a story to follow involving locating dungeons, finding relics, growing your magic skills and learning what is truly going on in the Empire, you are not penalized for taking time to focus on gear upgrades or side tasks for a while instead.

This game’s greatest strength is, without a doubt, its art. Kitaria Fables is adorable. From the opening slides detailing the continent’s history to the cute way Nyanza rolls over in bed before sleeping each night, there’s lots of cute details to notice and be utterly charmed by. It’s clear the developers spent a lot of time designing and drawing this game, and it absolutely shows. I especially loved the unique designs of each characters – you’ll see species such as dogs, rabbits, bears, goats, and more represented in the world of Kitaria Fables, and all of them look downright soft and pettable. Even some of the monsters are pretty darn cute!

While I could absolutely look at Kitaria Fables forever, actually playing it for long periods of time is another story (or would that be another fable?) entirely. This game could use many quality-of-life improvements before it is truly smooth and enjoyable to play. In particular, much like the titles it is inspired by, Kitaria Fables is EXTREMELY grindy, with some crucial materials such as stone and certain monster resources being extremely slow to gather. The game focuses on upgrading your weapons and gear to improve your stats rather than a traditional “leveling up” system, and the amount of materials required to craft each next-tier upgrade can be rather daunting. True, the grind definitely comes with the genre, but, even compared to other similar titles, making any sort of progress or improvement in Kitaria Fables felt pretty slow. It is a calming grind, though, as I never got tired of those colorful graphics or gentle music even when I spent hours cutting stone or planting pumpkins.

That leads into the number one issue with Kitaria Fables as it currently stands: you have to do a ridiculous amount of backtracking. There is a fast travel system, but it’s not very well implemented, and several key locations are missing a teleport point until much later in the game – or sometimes missing one entirely. While this does get better as the game goes on and you have a wider area to explore, the beginning / tutorial section can get quite frustrating with how many times you have to run back and forth between a bunch of small, similar-looking areas, with only one or two checkpoints to help you along the way. The number of visits you have to make to Sage Alby’s house alone, while it does help you gain familiarity with the area, can get pretty boring quickly. While it’s less of an issue because they generally do have checkpoints in front of them, you may also have to backtrack by visiting dungeons multiple times to seek out treasures you couldn’t access the first time through.

Combat is generally pretty smooth and engaging, with Nyan able to use multiple weapons and a variety of magic skills in battle. One small complaint is that enemies take several seconds to fade away fully after being defeated, leading to a few instances where players may find themselves accidentally attacking an already-defeated foe while still-living ones will be dealing damage to them. Resources that enemies drop can also take a while to pop up, which can lead to getting ambushed by other monsters if you wait around to collect them.

However, one thing that should absolutely be stressed is that Kitaria Fables has a very active development team that is continuing to push out updates and make quality of life improvements based on player feedback. When I first got my preview copy of this game, one major complaint I had was that in-game time passed far too quickly, and a single day would often end before I could get anything done. Since then, the developers have released an update that slows down in-game time significantly, and allows you to get a lot more done in a day. This responsiveness and willing to acknowledge and fix issues is a major point in Kitaria Fables’ favor.

Fans of games within the combination “RPG and farming/crafting” niche should definitely find room in their hearts (and game libraries) for Kitaria Fables. Although it needs some work, it is a pretty fun and enjoyable game that stands out from others in the genre with its cute variety of animal characters and adorable, colorful art style. Lovers of the grind should especially give this game a try, as between questing, farming, and crafting, there’s a lot to get done!

Kate reviewed Kitaria Fables on Steam with a code provided by the developer.