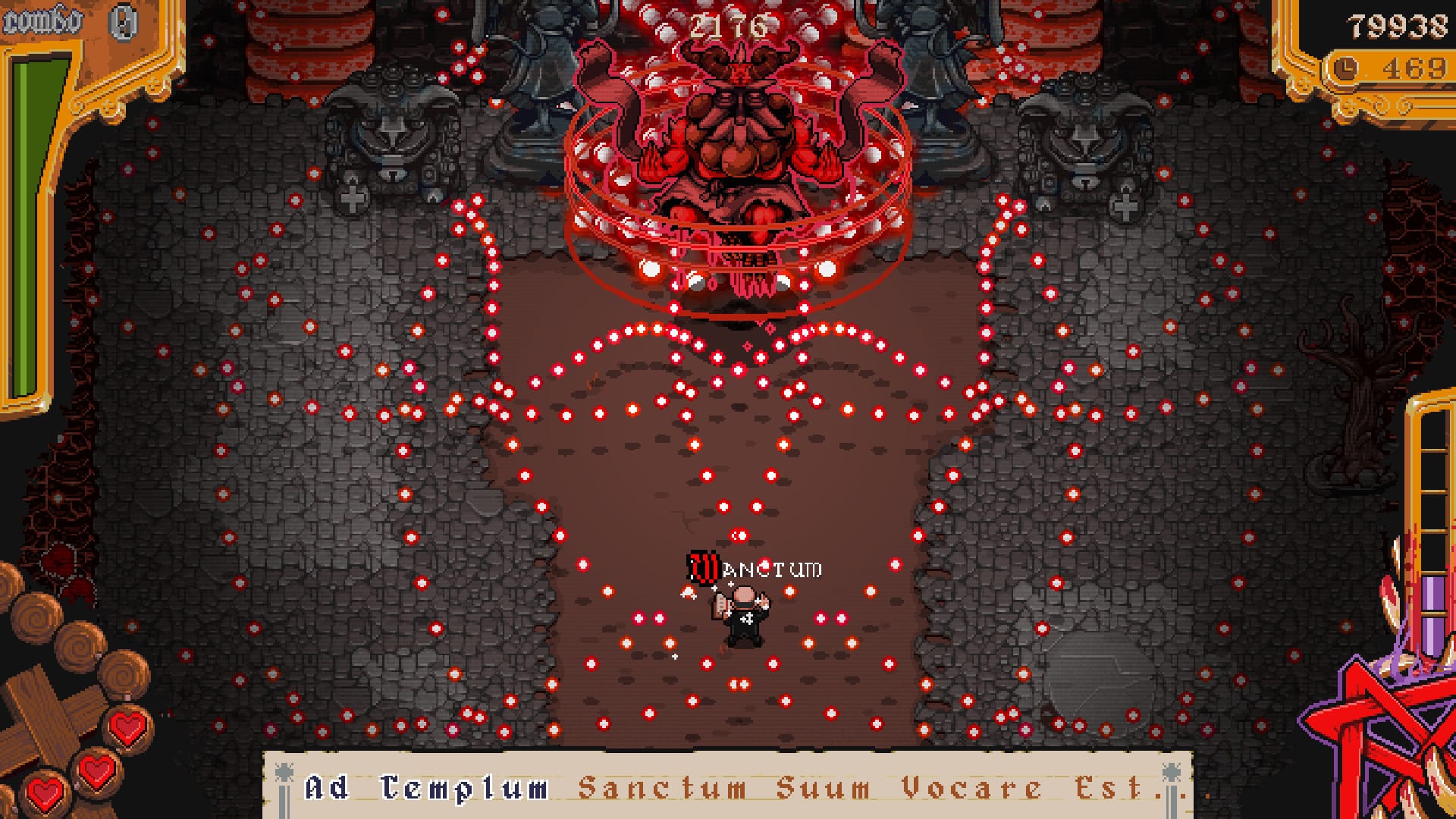 While some of you may have treated your sweethearts to an expensive dinner date on Valentine’s Day, I kicked back at home with my Papa Murphy’s pizza and The Textorcist: The Story of Ray Bibbia. In this bullet hell typing game mashup, you play as a private exorcist named Ray Bibbia, who must stop demonic forces from overtaking the Holy Church. While the overall concept is brilliant, there are other aspects of the game that don’t shine quite as brightly.

Typing constitutes the majority of the gameplay. In battle, you are given a series of Latin or English prayers that you must use against your enemies. When you type out your full incantation, it creates what’s called a “hollet,” or holy bullet, which will launch itself at the villain and damage them. But typing isn’t just important for fighting, it’s also how you interact with different objects in the environment. In your apartment, which serves as your central hub, you type to sleep, read your journal (which recounts what you’re supposed to be doing) or to access your files. There is a junky computer that you can use to research clues. You even have a navigator that you must type addresses into so that you can travel to different areas. This is so incredibly well-thought-out.

Character design is another strong feature of this game, and this is especially true with the villains. Each villain is wonderfully unique, and I loved that. You’ll first fight a Sopranos wannabe bandit, who attacks you with knives. The design for Magda, the second boss, resembles Regan from the classic 1973 film “The Exorcist.” She’ll even projectile vomit and spew blood in your direction as you fight — which I never thought would be delightful, but here I am. The vegan metalhead villain throws a microphone at you and his band mates also join in on pummeling you with music notes. Each villain has their own unique look and fighting style, which makes for a challenging but fun experience.

Additionally, I enjoyed the music for this game. The booming, Gothic beats of the intro song both excited me and set the tone for the game. Each level has its own funky electronic music that energizes you. I found myself bobbing along to the beat multiple times. The dance club track was probably my favorite, with its bright, poppy notes and fast tempo. In the level where you fight against a spider-monster nun,  the high energy intense track elicits terror within the player. The charming pixel graphics are also an impressive nod to adventure games of the 1990s, and are particularly pretty in the midst of battle, when you’re encountering a variety of multicolored, bright spinning orbs.

While the levels themselves were entertaining at first, at a certain point, it got to be too much. When I first started off, I thought it was remarkably kind that when you got hit, you didn’t lose health points. Losing health points actually takes some time. First, you must be hit by a bullet so that you drop your book. If you drop your book and get hit, then you take damage. As you’re playing through the first three bosses, you may notice that while you drop your book occasionally, you don’t lose health. I died a couple of times on the vegan metalhead level, but it wasn’t frustrating. My real descent into Hell began with the nun level.

In The Textorcist, you are supposed to type with only your left hand, and use your other hand to navigate around the enemies’ onslaught of bullets. But at times, I found that it was unrealistic to use just one hand when I was forced to type words like “omnipotentis.” Oh, and by the way, she could jump, and when she jumped, she would reverse the words so that they were difficult to read. Just imagine having to read backwards, type out the words, and avoid an onslaught of bugs and fiery balls. You’re going to get hit a lot.

At this point, your health isn’t the only thing that you have to worry about. If you don’t pick up your book within a certain amount of time, you’ll have to start over with your incantation. Sometimes the barrage of bullets is so intense and unavoidable that you have to move away from her, but if you move too far away, you can’t attack her. It felt like at that point I could have really used some additional help. I lost count of how many times I had to replay that nun level, or how much I screamed in rage at my computer. My final battle lasted at least twenty minutes, if not longer, because of how many times I dropped the book and would have to restart incantations.

Now I realize that I sound contradictory; after all, previously I said I liked the challenge, but I think it’s important to bring this up. While bullet hell games are known for being difficult, they are not supposed to be unmerciful. There’s a certain balance that a game must achieve in order to be both challenging and fun. Textorcist, I’m sorry to say, doesn’t have that. It is brutal, through and through. Looking at other bullet hell games, such as the popular 2017 title Cuphead, it’s common to obtain power ups. Specifically in Cuphead, you can get different weapons, or additional health points, which will help you out while still allowing the game to be challenging. But Textorcist is so punishing that it makes Cuphead look like Barbie fricking Horse Adventures. I would argue that you don’t get a “power up” until the level where you fight the seventh villain, which is your mentor. During that battle, you get the opportunity to transform into a demon, but you drop your book. Guess what happens if you transform back into a human, and you’re far away from your book? Death. Death happens, and there aren’t enough prayers to Jesus that can save you. This was where I finally had to quit.

I could forgive the game if I at least learned from my mistakes (or learned to laugh at them) but I couldn’t. Even when I walked away from the game and returned to it after cooling down, I didn’t enjoy my later victories. Even if I completed a level and felt somewhat good about it, I was also not exactly motivated to keep going as the story fell apart halfway through. The overarching story, which involves a private exorcist uncovering a sinister plot by a tyrannical religious regime, is thrilling and engaging. It’s a classic plot line with both historical and modern relevancy that I think a lot of players can relate to, or at least be interested in. Rather, it’s the underlying backstory that I found much to be desired.

I don’t want to give too much away, so I’ll try to summarize here. Essentially, Ray is a character with a dark past, which I can respect, but his dark past relates to some vaguely-written family drama. As I played through the game, I not only encountered plot holes, but also melodramatic writing. To me, it felt like the awkward backstory was inserted into the game to make Ray a more complex character. But because of the writing, it’s poorly executed, and feels wholly unnecessary. While I applaud this game for its character design, the character development itself has a long way to go.

At times, the humor in the game also fell flat. For example, I really loved how this game centered in 1990s Rome. But when you go to visit Naples, the home of your mentor, the environment suddenly changes. Sakura blossoms float through the air, and a mountain, which is strikingly similar to Mount Fuji, looms in the background. Without warning, I was thrown into an unexplained, Japanese-influenced Naples. I’m assuming that they were trying to play on the “Old Master” or “Mr. Miyagi” trope, but it was more bizarre and unnecessary than anything else. Now that doesn’t mean that the game wasn’t funny. Ray, as grumpy middle-aged man, was especially humorous in the moments where he was trying to use his computer, or understand teenage trends, like vegan metal music. I was also chuckling at the clever puns, like how Ray’s computer used the MSDEUS operating system, or how the Internet was referred to as the “VatNet.” The name of the strip club is the “Titus Twister,” y’all. THE TITUS. TWISTER.

While the game has a lot of areas it can improve on, such as the awkward writing and the punishing gameplay aspects, I would still say that it was one of my best Valentine’s Days in recent years. The first few hours were addictive, frantic fun. Fans of hardcore bullet hell games, or dexterous one-handed typers, this is a match made in heaven for you.

Chloe played Textorcist with a code provided by the publisher. You can grab the full game on Steam.