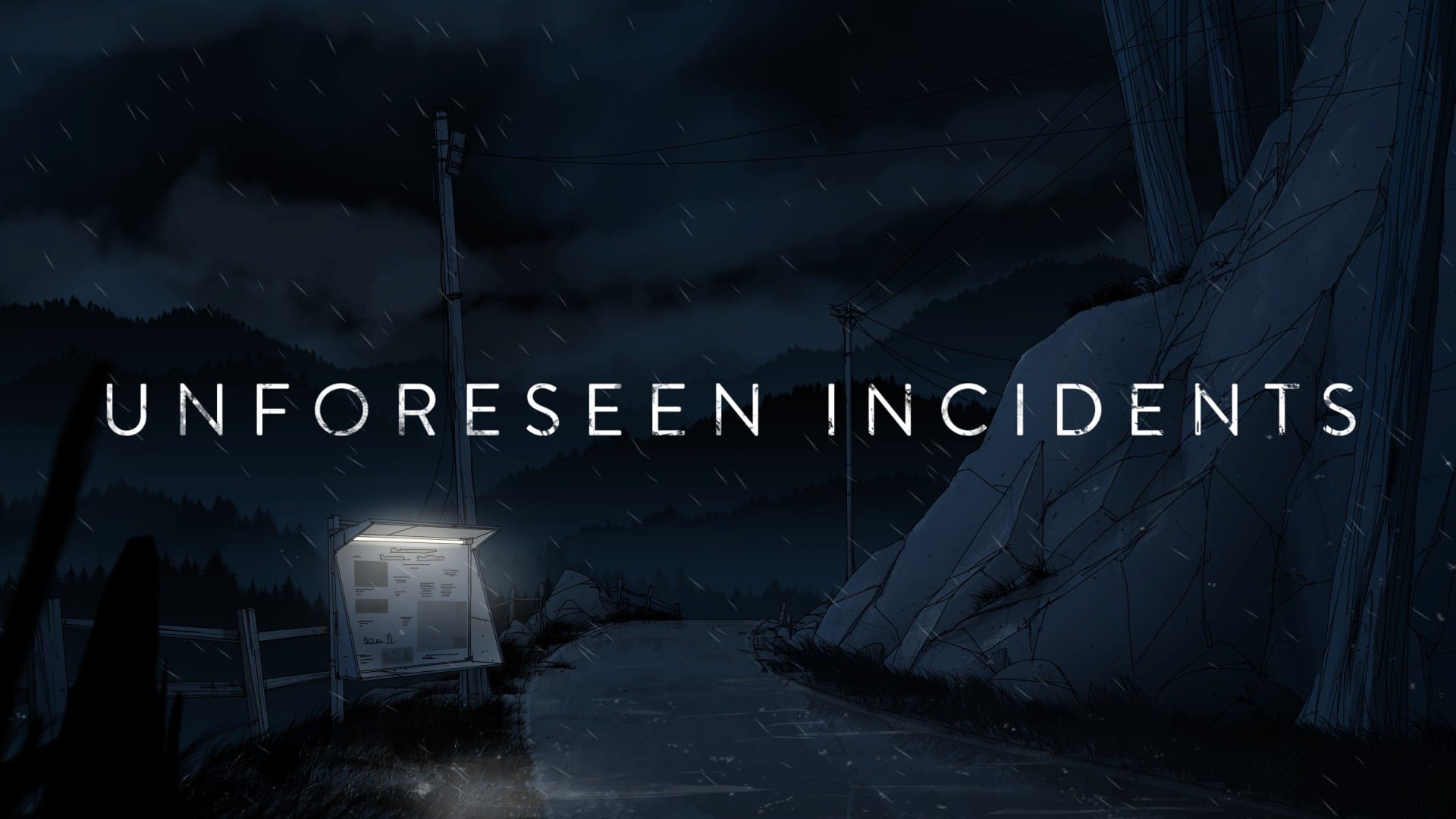 My discovery of Unforeseen Incidents  was completely by accident. While scrolling through Twitter, I found the account of the developer Backwoods, with their colorful and bubbly profile photo catching my eye. Unforeseen Incidents appeared on their page and I was intrigued by the artwork and description of the game.

Harper Pendrell is the local handyman of the oddly empty settlement of Yelltown. With its strange statue in the local square and everyone’s obsession with sports, there is more going on with Yelltown than what meets the eye. What residents have dubbed the “Yelltown Fever” is sweeping communities and leaving citizens dead in the streets. Innocent Harper, taking a stroll one day, finds an infected woman who gives him an envelope that starts his journey to uncovering the secrets behind the fever.

Unforeseen Incidents is a simple, yet beautiful point-and-click adventure that spans several locations. The main story isn’t new or exciting. It’s a simple story, but the way that it is explained throughout the game is something that I really liked. At the beginning of each new chapter (there are 4), there is a radio broadcast that plays explaining happenings in nearby towns and quirky things like if roadkill is something edible or not. During these scenes, the background is a gorgeously hand-painted landscape that gives a glimpse into the area that Harper is going into next.

When it comes to the controls, Unforeseen Incidents doesn’t ask too much of the player. The main mechanic is point-and-click, with some simple dragging and dropping scattered through.  Harper always carries his multi-tool, which is used at least once in almost every scene. It was a very handy part of the game that I found different and fun. The multi-tool, along with any other items that Harper gathers, are all stored in an inventory that can be accessed by moving the mouse to the top of the screen. Again, this is something that I liked as it kept my screen clear from clutter and wasn’t hard to access. Dialogue options are given at the bottom of the screen with several options every time. I’d recommend going through each dialogue choice twice as lines may change.

The art style of the characters and background of the game is hand painted with a gorgeous color palette that is fitting for Unforeseen Incidents. Colors are vibrant when needed, like when Harper is exploring Port Nicola, a city on the ocean. On the other hand, they are deep and dark, as within the Greystone Woods where Harper decides to go wandering around to understand the meaning to a crazy man’s triptych. Its this art style that caught my eye and made me want to play Unforeseen Incidents.

Another thing that surprised me was the dialogue and the voice acting. Harper had some of the funniest lines that made me feel sorry for him, but at the same time made me realize that he has a hard time saying no to people. Although my favorite voice actor was that of Leroy’s, especially when he is crying over his junkyard. His sobs aren’t the most genuine, but do come across as a man upset at losing something he loves. Emphasis comes across clear and subtle effects, like Leroy’s sobs, give depth to how the characters feel at that moment. Simply, the voice actors match their characters. No matter how many times I ran around in circles with the dialogue, I never grew sick of hearing the lines or the voices.

So, I think Unforeseen Incidents is great, but it does have its shortcomings. First of all, the gameplay requires a lot of backtracking. You’ll be visiting the same area multiple times to hopefully unlock the next thing that you can do in that area. It gets tiring as not all situations are straightforward when it comes to the order of events. I found myself listening to the same dialogue and clicking on the multi-tool many times to figure out what to do.

Another small gripe that I had was that some of the loading screens seemed to take very long and not all of them faded to black perfectly. For the screen fading, one of two things happened for me. Either the screen would fade perfectly or the screen would fade, yet still show slightly under the black then jump to an all black screen. I couldn’t figure out if it was something wrong with my game or computer. It was just slightly annoying and didn’t make for a seamless experience.

Load times is another issue that I have with Unforeseen Incidents. Some areas seemed to take, roughly, a minute or two to load while other sections loaded in fairly quickly. I noticed this happening more frequently when I progressed further into the game. Again, it only really impacted having a seamless experience, but wasn’t fun when I had to go back and forth between multiple locations many times.

Lastly, I’d like to talk about the ending. It is something I’m still extremely divided on because of two reasons. First of all, the ending wasn’t a big surprise. At the beginning of my playthrough, I had answered the “Who did it?” and “Why?”. I didn’t realize till the end that I had answered those questions correctly and I wasn’t taken aback when I found out. Pay attention closely and the game gives you all the pieces to the puzzle before the end of Chapter 1. Look any closer and you’ll be able to solve the puzzle before Chapter 3, except for one major plot point. As I said before, it is a simple story and doesn’t warrant any deep thinking or revolutionary ideas. The ending is probably something that could happen in today’s society, if you really want to think about it that deeply.

Secondly, there is a major plot point that was answered in the ending, that I never saw coming. I was surprised as I thought I had answered all of the main questions, but I had overlooked this one. It is hinted at, vaguely, throughout the game. When Harper and Helliwell travel to the source of the Yelltown Fever, they both realize there was a deeper meaning to the fever and why it happened. It wasn’t this that surprised me. Rather, it was a person that I didn’t realize who played a bigger part than what they seemed to throughout the story. This sudden turn of events was a highlight of the game for me because it worked well. Even so, it balanced out why I am divided on the ending as a whole.

Overall, Unforeseen Incidents is a great time waster if you want some amazing artwork and an off-hand main character who has no clue what he is doing. It’s quirky and beautiful, but isn’t revolutionary by any means. The story is predictable, but the voice acting, art, and dialogue more than make up for that. If they made any sort of spin off short film to this game, I think it would be a great idea and I’d support it 100 percent.

Haley reviewed Unforeseen Incidents on PC via Steam with a copy provided by the developer.