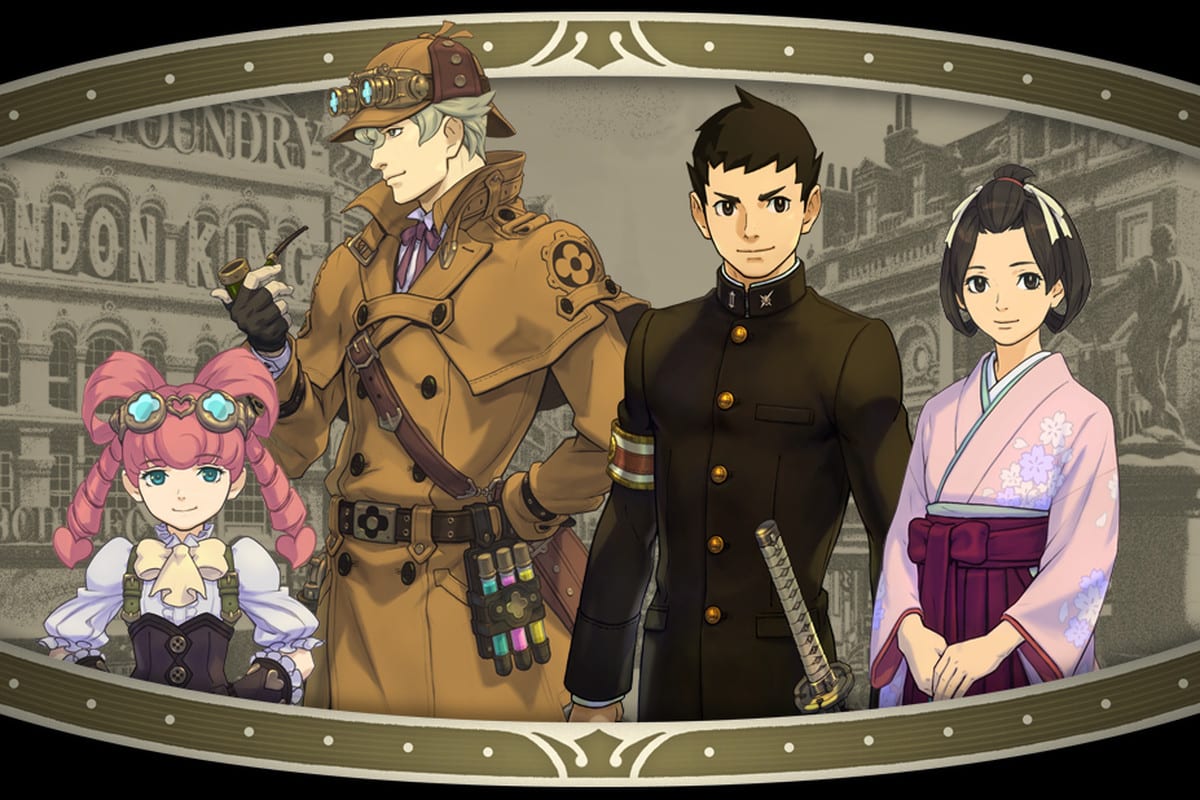 The writer of Dai Gyakuten Saiban, Shu Takumi, is known for his impeccable ability to create relatable and quirky characters. However, getting those same themes across in a different language can be very difficult. Janet Hsu from Capcom has done a fantastic job on the official localization. Under her careful work, almost every game in the Ace Attorney franchise has found a home outside of Japan. The only exceptions being Ace Attorney Investigations 2 and Dai Gyakuten Saiban.

Scarlet Study is a relatively small team of fans who have taken it upon themselves to bring the gift of Ace Attorney to the world. They have been hard at work for the past couple of years, localising Dai Gyakuten Saiban. Their work is more than a simple translation, as it involves extensive editing to ensure a high level of quality. Our interview with Scarlet Study has made it clear how difficult of a job translation can be.

Last time, we took a look at some of the broader aspects of localization. Today, we’re going to learn about the more specific challenges and obstacles Scarlet Study had to overcome when localizing Dai Gyakuten Saiban.

GameLuster: Was it difficult trying to preserve the personalities of the characters in the translation?

Roseheart: I would say not really, but there’s a lot of tweaking to be done to bring out more personality in some lines where it’s lost in others due to translation issues.

Lightdasher: I’ve not had an issue with writing and re-writing some dialogue on my end. Some lines had to be rewritten while saying the “same thing” though.

Masterofmemes: On the Japanese side, the personalities are plenty obvious, as Japanese is a pretty good language for getting things like that across.

Meanwhile, English has a very wide vocabulary and is also pretty helpful in that regard. But yeah, as Rose says, there’s always more work to be done on that front. Thanks to our new British members, though, the process is better than ever.

TotallyTheJiffyBot: I can speak on this one as a translator. I don’t know about the others, but it did sometimes feel like a challenge to do. Though I think with our editing process, we can get the original personality nailed down pretty well. That said, the initial translating often requires some interpretation. So, it’s always fun to write personality in that I think matches the original.

Thankfully, we have translation checking to make sure nobody goes too far.

Uwabami: It’s certainly one of our objectives not to make it sound like an anime fansub from the ’90s.

TotallyTheJiffyBot: That too. There’s a lot of work that goes into making it feel as natural as possible in English.

Henke37: No stupidity like little girls talking in the third-person about themselves.

Masterofmemes: Oh yeah, that’s one more thing. Japanese is also really good at saying a lot of words but not getting much across. So, when it comes to adding personality, that gives us a lot of extra room to work with while also adding to the challenge of keeping it natural.

Roseheart: I don’t know if this sounds weird, but Japanese humor is usually more situational than specifically what they’re saying. So like, a simple “yare yare,” can be funnier than a “good grief” in English. We’d usually write a proper joke to replace it.

TotallyTheJiffyBot: Yeah, I’ve had a lot of fun adding some snark to Ryu’s thoughts or a lot of wordiness to Van Zieks’ lines.

Uwabami: It’s also impossible to make English equivalents of some things in Japanese. The antique dealer from Episode 1 had a particularly difficult one.

Uwabami: Oh yeah, Jezail. We considered making her French for a short time.

Uwabami: It would have made sense since French was actually spoken in (royal) courts at that time in England. It would give English speakers the same experience as Japanese players when they read her English.

Xz: After Jezail, we decided to keep everyone’s nationality intact.

Hyarion: Instead, the solution we used took inspiration from the game itself. When she speaks English phrases while standing in the Japanese Supreme Court, they’re shown in a very fancy handwritten cursive — it’s rather hard to read even for native speakers, which helps convey the language barrier to our audience

GL: Now, about Souseki. What does he say in the Japanese script? When he’s doing his special movements?

Roseheart: There are some long words in Japanese made up of four characters that usually have some kind of metaphorical or philosophical (not always) meaning.

So, every pose is like one Kanji. 先手必勝 (sentehisshou) = victory goes to he who makes the first move

TotallyTheJiffyBot: They’re like figures of speech or expressions. I think that’s a good comparison to English, but it’s probably more than that. Oh yeah, he makes up his own sometimes from what I can tell.

StarStabbedMoon: He is a writer after all.

TotallyTheJiffyBot: Ah right, I always forget which order it is.

GL: Is there something different about Souseki’s name order?

TotallyTheJiffyBot: Well, it’s more like we just get confused. At least I do, cause I have to check the Wikipedia article to remember which is the family name.

Uwabami: It’s usually more obvious. We know the right order, but we get confused sometimes.

Masterofmemes: People generally know him as Natsume Souseki and it doesn’t help that it flows way better than Souseki Natsume. Neither of them really sound like a first or last name (in my opinion). So, it just takes a bit of reminding to use Western name order.

Roseheart: Uwabami has a lot of confidence in the team.

Edo: Yeah, famous Asian people get their family names first in the West.

GL: Before we conclude, I’d appreciate if everyone here would leave a parting comment to all the fans and readers.

Roseheart: Please examine everything in the backgrounds because a lot of work goes into those files and I know some player never do it. There are some gems in there.

TotallyTheJiffyBot: Failure dialogue too, but I can’t really ask players to lose on purpose. Some of Zieks’ roasts when you mis-present are really good.

Henke37: I have to give respect to our hackers. It is very hard to find people who have the skills, time and interest. The translation would be severely compromised without them. Also, control codes are cool.

Masterofmemes: Ok, get ready. Here’s my final comment, as Translation & Writing Extraordinaire to the Stars: hire me Nintendo please.

Lightdasher: Gina and Iris have an adorable friendship, love ‘em together.

SethZ: I just hope people have enjoyed the work that we’ve put into this. The reason I joined was because I enjoyed playing Gyakuten Kenji 2 so much and wanted to help bring that enjoyment to others.

TotallyTheJiffyBot: Thank you to everyone who has enjoyed our work. I appreciate all the praise we get and it makes working with this great team even more fun. I hope everyone looks forward to our next release.

Xz: Everyone on the team is amazing and 2019 is gonna be an amazing year. Look forward to it.

Edo: It’s been a pleasure to work with this team. Even though I haven’t been able to dedicate as much time as I’d hoped. Please laugh at all the jokes and puns we’ve sprinkled in!

Okaykei: I have to give respect to everyone. People sometimes really underestimate the work that goes into a fan translation. Even with the credits, not everyone quite understands just how important each role is. Some people even underestimate how much work the translators do.

On that note, though, I want to thank everyone that’s taken the time to try out our patch and I hope you can feel the love and care put into each case!

Rahky: I want to say, thank you so much to those who have played and left feedback on the patch. We hope you continue following our trek through the mess of Dai Gyakuten Saiban.

Also, I have to commend this ragtag group of nerds making it all possible for just being top tier. Game translation has a million different facets most people are never even aware of.

Hyarion: The Ace Attorney series means a lot to me since I played the original quadrilogy together with my whole family as they were released. I wanted to give back to all the people out there who have had experiences like that with Ace Attorney by joining and helping our translation of these excellent games be the best they can be.

Be sure to check out Scarlet Study on their official website, and stay tuned for more original features and interviews on GameLuster!

A freelance writer based in Sydney, Australia. Loves all types of games, from Clash of Clans to Final Fantasy. In his free time, partakes in well-known Australian stereotypes such as riding Kangaroos to class and wrestling crocodiles.