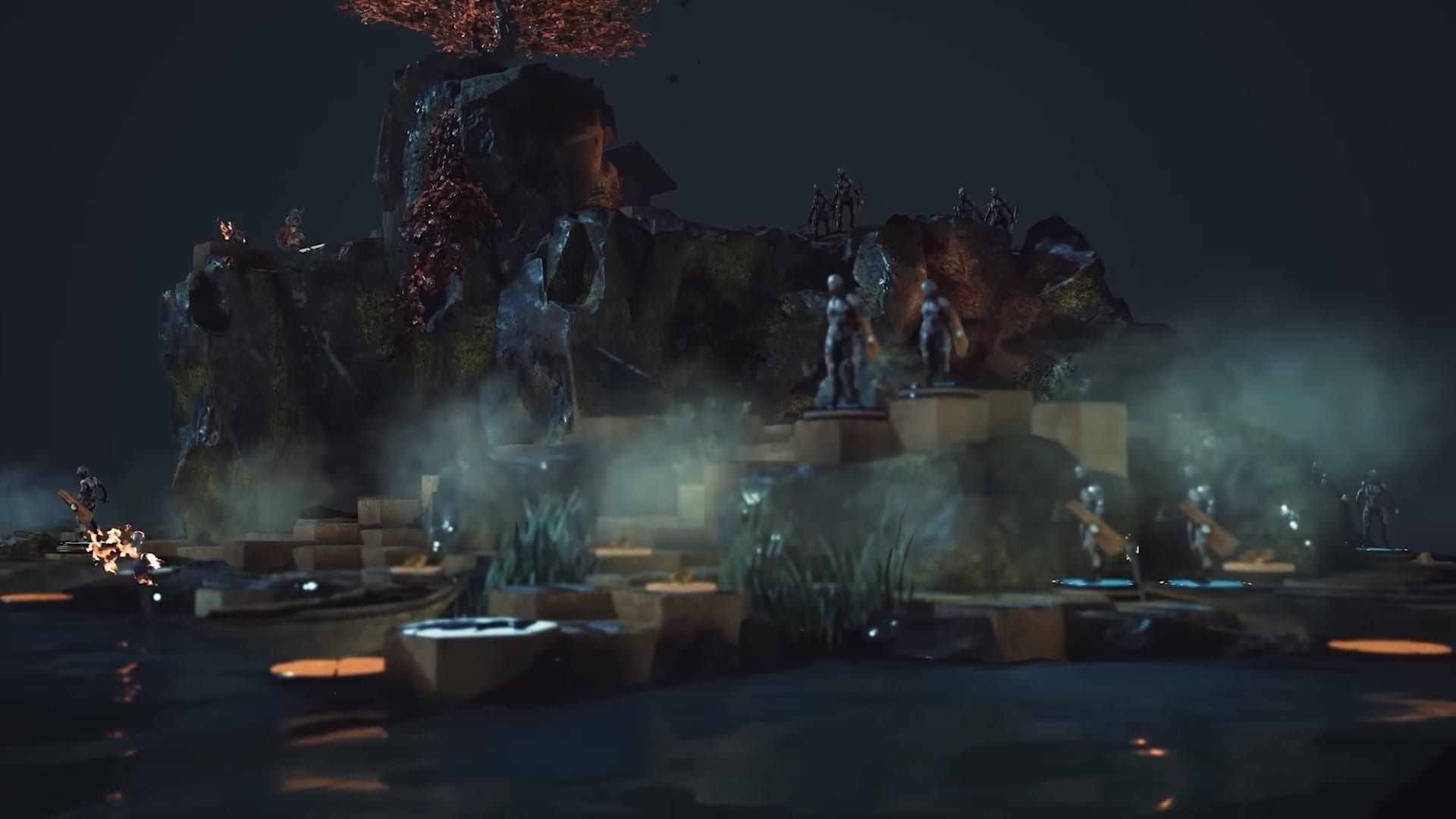 Dang it, I did it again, didn’t I? Whenever I aim to discuss vikings and Norse mythology, I end up rambling in Swedish. I should really go back to that doctor. Clearly, these meds aren’t working. But before I do that, why don’t I review Wartile, in English this time? At least then, you reading this may decide to play it while I complain to my doctor.

Wartile is a mix between turn-based and real-time strategy set in the Viking mythos, built around the idea of animated boardgame figurines and actual landscaped boards for levels. This last part, alone, was enough to draw me into the game. The scenery is really quite beautiful, as can be seen on its Steam store page. In game, the levels are mostly scaleable, interactive, and even reactive to your movement. The level is laid out in tiles, again similar to a board in a boardgame, onto which you can drag your characters, causing them to hop onto the tile, as if picked up by an invisible hand in order to be moved around. The figurines are built around this aesthetic, too, as they have round bases and resemble a figurine you’d use in a boardgame setting.

More interestingly is the functionality of the levels themselves. All of the levels offer a relatively free camera that allows you to zoom in and out, as well as rotate the camera in the horizontal plane. The perspective remains top down, but turning the camera around allows for specific movement and even visual admiration. What’s more is that many of the levels contain interactive tiles or areas where your figurines can interact with the elements provided. This always means bonus loot, healing items, totems that save your progress up to that point and heal your characters, optional quest items and generally inhospitable zones for added challenge. It pays to go into detail on this last one, though the other ones are fairly self-explanatory. Wartile sometimes offers areas such as poisonous fields where precise timing is needed to make it across without taking damage. Usually, the point of this optional detour is to provide a different route to your main objective or reward you with some bonus loot in the form of money or items. All of this, of course, turns the levels into more than simple eye candy.

On these boards, then, you find your main objective alongside some optional ones. This usually revolves around killing enemy figurines with yours, which is where the rest of the game comes in.Wartile requires you to pick and choose between several classes to form a party of three in order to tackle the specific objective of not dying. Everything in Wartile is built around the theme of Vikings. Your characters, initially, are Viking warriors; the levels are built with plants and rocks from up north; monsters are drawn from Norse mythology; you spend runes on abilities and items in viking-themed shops; and set out for conquest on the overworld map on a viking vessel. It’s enough to drive a man mad, but I’m a sucker for Danish axes, overly large round shields and funny looking shoes, if only because every time a game like this pops up, people feel the incessant urge to explain why Viking helmets didn’t have horns historically speaking, as if anyone’s still listening.

Wartile may certainly have won me over in the aesthetic and general atmosphere of its game world, but it lacks a number of key features to warrant a full recommendation. As mentioned, the game is supposed to be a strategy game. It combines turn-based and real-time strategy by allowing real-time movement and decision making, but limiting it by imposing cooldowns on every action you can take. Your characters will auto-attack enemies in their immediate vicinity and generally swing at the speed of their weaponry. Spells and abilities can be used according to their cooldown period or the amount of runes you have available to spend. Sadly, cooldowns aren’t just imposed on your combat abilities. Moving around is also placed on a cooldown, which is where Wartile begins to show its lack of complexity.

Starting out on any level is usually where you get your bearings: where am I, what’s my objective, where’s the nearest enemy to kill? Wartile emphasizes this introduction by panning over the board whenever you load in. This panning primes you for anxious movement and exploration, but instead the gameplay moves at a crawl. You move a set number of tiles each jump and then wait several seconds for the cooldown to run out. That’s twice as long as early level movement really should take. Obviously, movement is limited to where you can’t just run from an enemy or cheese them somehow; the point is to make movement carry weight and consequence. It is rather absurd, however, to impose such a limit on the player when the only measurable consequence of an incorrect or undesired movement is staring blankly at the screen waiting for several seconds to pass. This may seem really nitpicky, but the seconds really do add up, if not physically then subjectively; gameplay begins to drag on and it’s easy to get annoyed over so small a thing.

Otherwise interesting parts of the game subsequently begin to reveal their shallow nature. Combat is reduced to nothing more than waiting for enemies to die. There are abilities specific to characters, but I found them mostly unreliable or hardly consequential. Some abilities like stuns have obvious benefits: your enemies can’t whittle down your health in the meantime. But the game boiled down to save-scumming the enemy out of a clear shot. Despite the totem pole seemingly restricting your chances of abusing save states, it instead welcomes your proclivity to game the system. If you’re slightly unhappy with how much damage you took, well just reload from the totem pole and do it over.

But even without this abuse, combat winds down to outlasting the enemy due to superior equipment or a never-ending supply of healing items or abilities. This may seem overly reductionist or even tautological, but the game seems to want it no other way. You soon figure out if you can handle the challenge the level throws at you. If after your first two fights, you’ve already used one or two healing abilities, the level is probably too hard and you should quit to grind a level. The game seems to encourage this by offering you to replay every level two additional times after the first playthrough on increasingly harder difficulty. I, myself, had to replay the very first level once to ensure that my characters could steamroll over the enemies in the new levels after they failed miserably to keep a foot in the door the first time I tried. And all of this by grinding just one level, that is one board and one level up all in one replay.

The game offers customization options in the form of runes that increase your stats or weapons that do the same. This sounds great on paper, but ends up being inconsequential in practice. Weapon upgrades are immediate and subsequently non-existent; you find the best weapons early on and never have to bother thinking about upgrading since you simply won’t find anything worthwhile for several levels. Runes operate the exact same way, only with the veneer of added complexity when it’s really just a numbers game. There is no reason not to upgrade your +2 damage to a +4 damage once you get the latter. Increasing health by 50 is also a no brainer over increasing your defense by 3.

The party complexity doesn’t go much further than three melees and two ranged options, one being an archer and the other being a magic user. This would signal some added complexity if the combat wasn’t merely waiting for enemies to no longer be alive. I used my two first melee guys, who have the most experience for being first to use in game, alongside an archer character as soon as I could (the archer is slow to unlock, disincentivizing any experimentation since that requires grinding to character relevance). I found the archer mostly janky in use, never providing accurate feedback on whether or not my abilities were being used or how effective they were.

The game really hit a lowpoint for me in a specific mission where you have to make it to the other side of the level by burning through walls with torches. Stealth was the preferred runthrough of this level as you hasten to complete the objective without waking up the guards since combat is so dull. You can burn their tents to stop them from spawning, but then you lose fire to unlock items and optional objectives. If one party of guards inevitably wakes up—you have to kill some that are in the way—a timer will run that triggers an alarm at the end that wakes up all remaining enemies. Obviously, I wanted really badly to finish the mission without triggering the alarm, but I kept finding myself unable to do so. My team was simply not doing enough damage to kill the select few guards in the way from time to time and I found myself restarting a lot. I ultimately couldn’t pass without quitting the level and grinding an old one again, my frustration only enlarged by the fact that my archer seemed to be shooting arrows only half the time, and seeming to miss the other time.

That’s really where my final verdict of Wartile lies. The game has some very interesting elements such as the atmosphere and aesthetic, and some very frustrating ones like the forced grinding caused by ineffectual combat. And when the one means of finishing your objective becomes a wait-fest to see if you have to do more waiting in a different, older, easier level, it becomes hard to recommend to anyone really looking to grind his teeth at three in the morning to finish a suspenseful level before diving headfirst into the next one. A fair assessment would be that Playwood Project shows ambition, passion, and care, but still lacks the skills, experience, and maybe finances to pull through. Not a bad debut title by any means, but not the second coming of Baldr Christ in video game format.

Now, if you’ll excuse me, I have to go see about that doctor. I don’t mind needlessly taking drugs, but I don’t much appreciate being made a fool of. Not if I can help it, at any rate.

Jorge reviewed Wartile on PC through Steam using a code provided by the publisher.

Perpetual student of literature living in the most beautiful city on Earth. Iconoclasm should be the main goal in artful conduct. Doing squats is pretty cool, though, I guess.