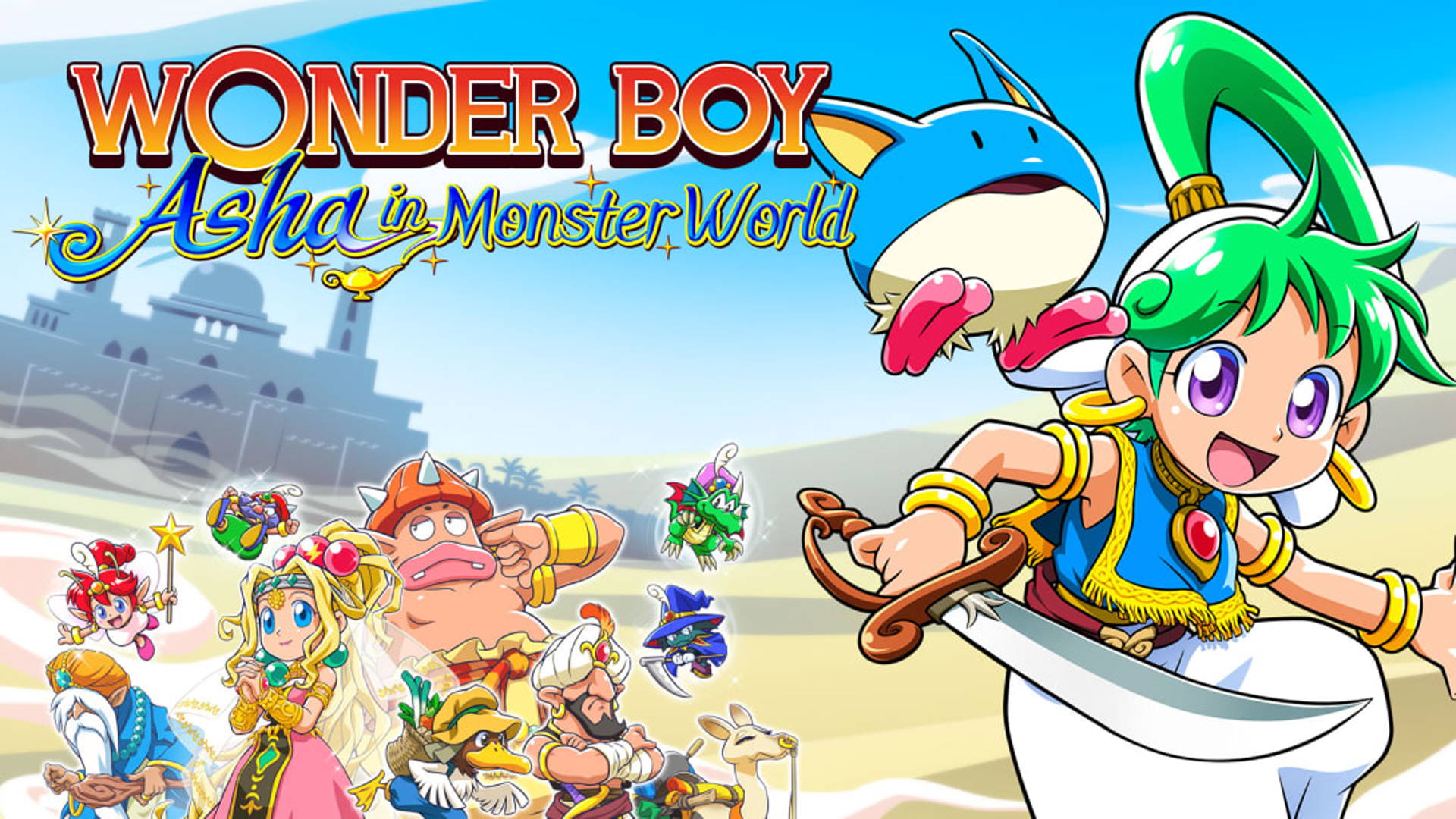 In recent years, the Wonder Boy series has seen something of a resurgence. We’ve gotten brand new games like the fantastic Monster Boy and the Cursed Kingdom to remakes of some of the classic titles that managed to stand strongly enough on their own. So it’s not really that much of a surprise that they wanted to keep this train going with a remake of Wonder Boy IV, now titled Wonder Boy: Asha in Monster World.

As the title suggests, in this game we play as Asha, a green haired girl who proves that being a Wonder Boy is not bound by gender. Her design is charming and even though she came first, may remind a lot of folks of a certain half-genie hero. The game opens with Asha waking up and heading off to be an adventurer because this is a remake of a fantasy game from the 90’s and somebody has to do it.

Asha fights her way through a nearby dungeon, frees a sarcastic genie from a lamp, and heads off to the big city to meet with the queen and then proceed through four other dungeons to save the land. Plot really isn’t the big strong suit of Asha in Monster World. Unfortunately, I find myself struggling to figure out what actually is this game’s strong suit.

Each dungeon has its own mechanics that are repeated ad nauseam and you’ll mainly just be running back and forth, whacking the occasional enemy with your sword and sometimes using fixed points on the map to travel onto a different 2D plane to reach new areas or find items. The combat is pretty simplistic with your options mostly being hit enemy with sword or use built up magic attack to hit enemy with sword slightly harder.

The main mechanic of Asha in Monster World is introduced shortly after the first dungeon. Throughout the kingdom there are popular pets called Pepelogoo that are these round fluffy bird cat things. Asha hatches a special blue one, and it follows her along on her journey. The Pepelogoo allows Asha to perform special actions like a double jump to reach higher platforms, or if she holds onto it, it’ll act sort of like a glider to help Asha cross wider horizontal gaps. While other Wonder Boy games have unique transformations and sprawling worlds, Asha in Monster World has a pet that you need in order to double jump, and you have to hold down a button to call it to you before you’re allowed to do that so you can’t even use the double jump for fast paced non-stop platforming. It all feels really slow and exploring dungeons doesn’t feel like I’m on an amazing quest, but running an errand.

The boss fights are all pretty good and well designed, but they’ll go down easily enough once you figure out their patterns. I actually really liked the first boss, which felt like I was on a time limit as it was able to push me backwards towards a pit and I had to defeat it before it was too late. I’m a fan of mechanics like this. However, the last boss left me painfully confused, and I was waiting for another form or the real final villain that just never showed up. I’d say the bosses are the highlight of the experience, but the dungeons you have to go through to get to them drag on for a bit too long in what is already a pretty short title.

Wonder Boy: Asha in Monster World is alright, visually speaking. I personally prefer the more hand drawn animated style of some of the other titles, but here we have bright colorful 3D models designed to look 2D animated. There are definitely places where this works, like in cutscenes, but it’s nothing spectacular either. The animations on the characters and monsters are all nice. I always cracked a smile watching Asha shake her little butt with excitement whenever she opens a treasure chest. As a remake, the game makes a few quality of life improvements and has a good sense of humor with how it works them into the game. For example, in the original Wonder Boy IV, Asha would have to speak to the Sage if she wanted to save her game. Well in Asha in Monster World, you’re free to save your game anytime from the pause menu. This is a welcome improvement, but the Sage is still hanging around, and even jokes that now he’s out of a job. There are also several townsfolk that repeat the same dialogue, with one of them being self-aware as to how repetitive everyone is being. Little moments like this do add a touch of charm to the title that I want to highlight as a positive.

Despite all of my harsh criticisms here, Wonder Boy: Asha in Monster World is not a bad game. I can’t really say there are things it did that were unbalanced, unfair or frustrating, but it felt like it was playing things a bit too safe. It’s a very by the numbers 2D platformer that even back in the 90’s would have felt bare bones and repetitive while doing very little to innovate or excite the audience. Grabbing a physical copy of this game also comes with the original Monster World IV if players want to go through that as well. While I didn’t complete the original title for this review, I played enough of it to realize that there definitely are ways the remake shines and is a mostly better experience. However, a slightly improved remake of what was already a lackluster game doesn’t really amount to all that much.

Overall, it’s fairly difficult to recommend Wonder Boy: Asha in Monster World to anybody outside of diehard Wonder Boy fans who want to have a complete collection on their shelves. If you’re brand new to the series, you’d probably be better of trying one of the other titles instead. And if you’re someone drawn in by the aesthetics of the main character, there’s a certain purple haired half-genie that I think would provide you with a lot more enjoyment.

John reviewed Wonder Boy: Asha in Monster World for the Nintendo Switch with a personally purchased copy. The game is also available on PlayStation 4 and Microsoft Windows.

Wonder Boy: Asha in Monster World is a remake of one of the weaker entries in the original series, and a new coat of paint and a few quality of life improvements do little to help it shine.

John Does Not Recommend
About GameLuster's Reviews