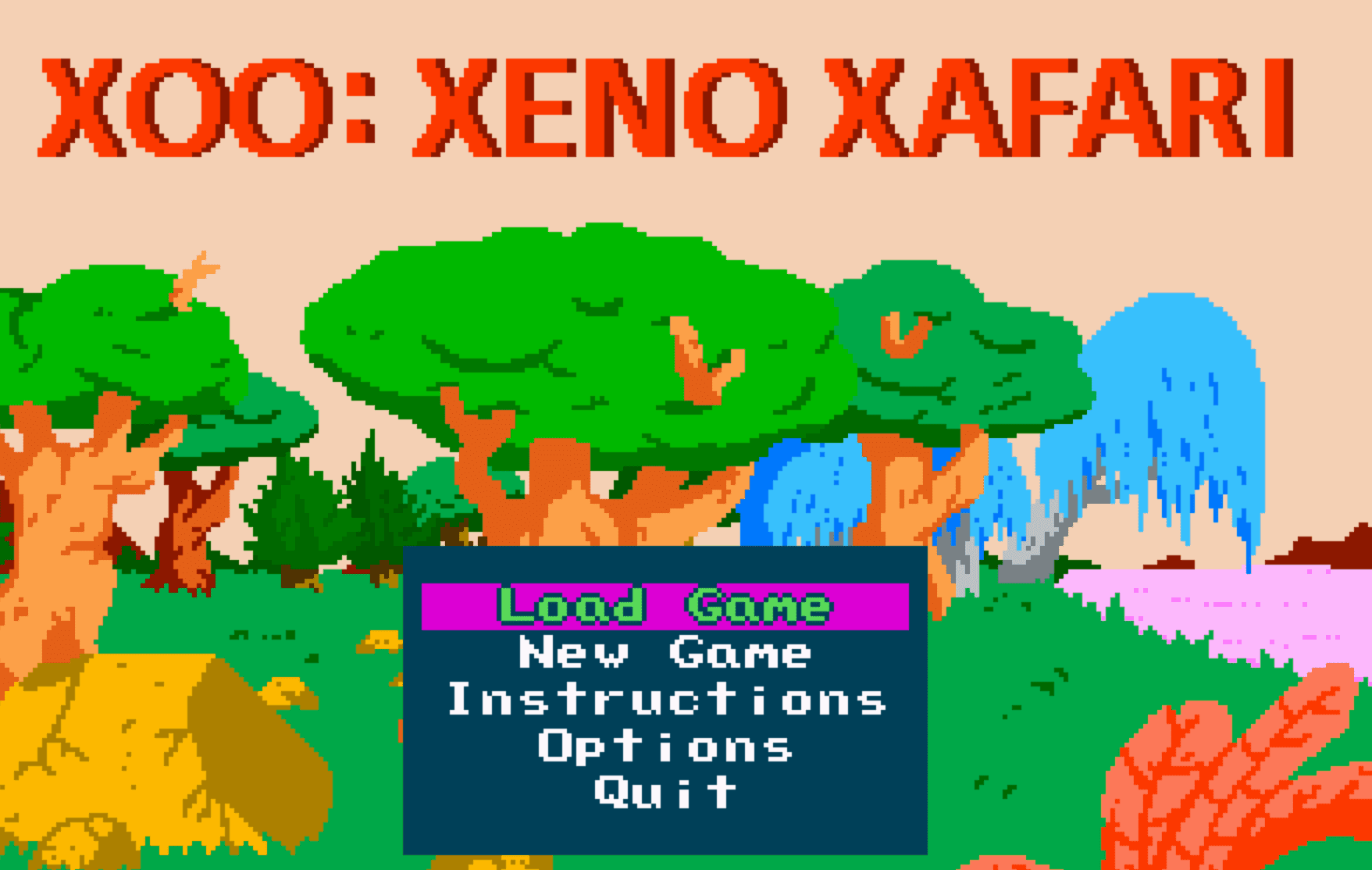 Xoo: Xeno Xafari is a classic pixel-styled adventure game with a focus on collecting. Playing as one of three characters, you embark on a safari to the mysterious Xoo Island, with the goal of meeting all 240 alien species (aka “Xenos”) who call the island home. Along the way, you’ll hone your skills, interact with a variety of robotic park ranger characters, and collect everything from vintage video games to ancient fossils classic claw machine prizes. Your safari is without any time limit – feel free to spend as much time as you like on Xoo, collecting to your heart’s content!

In concept, Xoo bills itself as an extremely chill, collection-focused game, something which can be played casually with minimal stress. And….I guess, at least to some extent, it accomplishes that. It is certainly a game that does not pressure you with strict time limits or requirements. While the goal is to see every xeno, the other collectibles can be gathered or ignored as you desire, and technically you can choose to end your safari at any time.

Unfortunately, in seeking “chill,” Xeno Xafari slightly overshoots its goal and winds up somewhere in the territory of “boring”. The core gameplay loop is simple and easy to pick up, but endless and unchanging: wake up, wander around the island collecting things until you run out of energy, go back to camp, sell items, buy supplies, go to sleep and then repeat the next day. It can become tedious quickly, especially as there is no reward – other than a sense of accomplishment – for filling out your Xenodex and various Collect-Dex. While raising your four stats (Hunting, Foraging, Exploring and Collecting) does make your goal somewhat easier, there is no other form of plot or character progression.

Even worse, progress in the game is heavily dependent on pure random chance. Whether or not various xenos will show up is randomized, with only the Hunting skill and a few purchasable items increasing that chance. It’s also frustratingly random how long a xeno will stay in one place – many times I found myself running out of energy before I could reach a new xeno, while one I’d already logged stayed on the map for three or four days, preventing a new one from spawning in its place.

Further increasing player frustration is that a few areas can only be reached if you succeed on an Exploration skill check, which you must pass again each and every time you want to enter them. Skill-increasing books are the rarest of the randomly spawning collectible items, so I quickly found myself with a painfully low Exploration after choosing to prioritize Hunting and the energy-boosting Foraging instead.

The tedium of searching for xenos is worsened by the fact that you do not start out with any kind of map function. Maps of each of the island’s four areas (Forest, Swamp, Mountains and Beach) must be purchased individually from the store, and each item requires a quite significant amount of money, which you must spend while also saving up to buy items that cause new types of xeno to appear. While the maps do show areas in which you have successfully logged every xeno, they don’t provide any other hints regarding where xenos might be spawning on a particular day, making them feel not worth it after saving up so much money.

Xoo is not without its high points, however – in particular, its writing. Each and every xeno and collectible has a unique description, and they are extremely well-written, featuring interesting facts delivered in a humorous style. I adored the different types of xeno, which ranged from completely bizarre brand new creations to seemingly ordinary Earth creatures (such as a particularly hapless flamingo!) to references to classic science fiction works including H. G. Wells’ The Time Machine and Stephen King’s The Langoliers. The collectible descriptions featured snark (the uselessness of claw machine prizes) genuinely informative facts (information about rocks and fossils) and of course, plenty of puns (the edible, energy-boosting Nuts included Grape Nuts, Corn Nuts, and of course Doughnuts). I truly enjoyed reading the bizarre and clever descriptions of items and xenos, and this significantly alleviated the otherwise dull and repetitive gameplay experience.

The best-written and most engaging of the collectibles are a series of journal entries written by a human scientist named “Dr. Randi.” They chronicle the events of her own safari on Xoo, in particular her growing relationship with Becky, one of the island’s robot residents. Collecting all 25 entries and learning that Dr. Randi and Becky got married and are happily living together as wives on Becky’s home planet was absolutely satisfying – not to mention adorable! It left me wishing that the other collectible types had a similar payoff for obtaining them all. This was such a cute little story, and I feel like a similar story would have made the Fossils or the Coins or even the Claw Machine Prizes more interesting.

Lastly, I feel that Xoo suffers from having minimal replay value, despite offering multiple playable characters. Although each character supposedly has a different “story” to experience, the changes are minimal, amounting to slight variations in internal narration / dialogue and the various e-mails which the player will receive from friends and family throughout the game. I found this frustrating, as it made the different characters seem superfluous to the overall game experience, despite having cool and unique well-designed sprites.

I think that ultimately Xoo is a game that has a lot of potential, with great writing and cute sprite work. Currently, the repetitive nature of the gameplay loop and the lack of reward for completing any of the collection-based objectives makes it frustrating to play and not enjoyable for more than a short period of time. With a few improvements, though, I truly think Xoo could become a game which appeals to fans of casual games, humorous games, and creature-based titles such as the Pokemon franchise.

Right now, Xoo is a flawed game which is enjoyable for a short period of time but quickly becomes dull, due to its narrow focus on collection to the exclusion of any other type of gameplay. However, it does feature stronger than average writing with a genuinely humorous tone and lots of creativity.

Xoo: Xeno Xafari is an adorable pixellated adventure featuring various species of aliens from around the galaxy. The fun and interesting xeno-focused plot is dragged down by repetitive gameplay and a lack of rewards for completing in-game objectives.