Depending on whom you ask, Star Citizen could be one of the most promising titles in development, or it could live up to a title I’ve heard it referred to as: “Scam Citizen.”

Cloud Imperium Games, or CIG, promise a space MMO unlike anything we’ve seen before, and it has dedicated a ridiculous amount of time and money to make this happen. I’ve taken an interest in the title and tend to view it positively; that said, there have been some red flags.

Star Citizen is actually two entirely different games. There is Squadron 42, a single-player experience that features more than forty missions and an impressive professional cast, including the likes of Gary Oldman and Mark Hamill, and Star Citizen Persistent Universe, a MMORPG much like EVE Online but with a first-person perspective and greater focus on an immersive world.

First, I’ll give my impressions on Squadron 42 or, rather, what little of it I’ve experienced.

While the game is unfinished, many of the underlying gameplay systems can be sampled. Frankly, it’s pretty impressive; combat feels great, graphics are beautiful, and the setting — a Rome-inspired space empire — are all interesting.

CIG promises 1,255 pages of dialogue and twenty hours of performance capture. That said, to date only a demo mission has been released. The game’s release is more than three years behind schedule, and there is currently no release window. As a matter of fact, Squadron 42 isn’t actually going to launch all at once and is broken into three chunks of content. This means even after the first piece of the game comes out, players will have to wait for the others.

The Star Citizen Persistent Universe, or PU, is also being released in chunks. CIG has been building the game from the ground up, adding in locations and content as it comes out, and are committed to continuing this. They point out that many MMOs, such as EVE Online, follow a similar model of constant evolution and turn out better because of it.

However, Rome wasn’t built in a day, and neither will space-Rome be; it is largely due to the PU’s level of ambition that Star Citizen is years behind schedule and currently without release date. 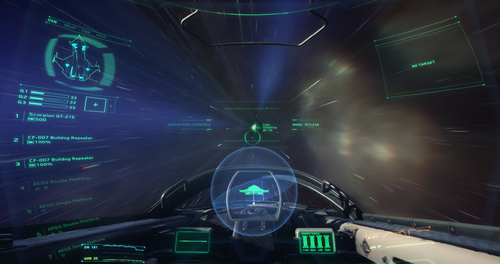 CEO of CIG Chris Roberts said in a recent interview with Eurogamer that he is “fed up” with giving release date estimates. It makes sense that bringing his vision of a great game to life isn’t an exact science, and being pressured by deadlines likely makes his job difficult. However, these delays have been like nothing I’ve ever seen, especially in a crowdfunded game of this scale.

In my opinion, when you accept crowdfunding, you make a commitment to those who give you the money. Deadlines should count for something. Maybe there was a fine-print disclaimer next to the anticipated release date, but even if it’s not exact, the release dates should be some indication of what will be released when.

If you have no patience for delays, then absolutely stay away from this game. At this point I would be more surprised by it meeting a deadline than missing one.

Delays aside, it is quite clear that CIG is actively developing Star Citizen. The development process is remarkably transparent, so much so that you’d have to have a lot more free time than I do to follow it fully. More days than not, there are several news items posted to their website, and the developers listen to player feedback and actively engage with the community.

There’s more controversy to Star Citizen than just the release date; the way the developers seek funding has been questioned.

Through microtransactions, CIG has sold ships to their audience. I own the $100 Cutlass Black package. This gives me access to the game in its current state, Squadron 42 whenever it releases, and the Cutlass Black ship to own in-game. This is obviously expensive, but nothing beyond founders packs that have been offered by other MMOs.

That by itself isn’t too controversial. However, Star Citizen doesn’t stop there.

Some ships sell for hundreds of dollars, a few break $1,000, and there’s even one game package that sells for $15,000. CIG justifies this by saying all this content is optional, that only those who can afford it should buy it, and everything will be obtainable in-game. Perhaps that’s true, but they’ve used a number of what psychologists call “social influence strategies” to persuade players into buying these ships.

As a psych major, I’ve been interested in CIG’s use of social influence to sell ships. They’ve created scarcity of ships through setting deadlines, as many ships only sell for a limited time in limited quantities, and many of the more expensive ships only sell a predetermined number.

They’ve also used the technique of labeling, specifically with several of the Origin Jumpworks ships, like the 890 Jump. The 890 Jump is a luxury ship that sells for $890.

Why does it sell for so much? Well, because it’s luxury. There are actually a good number of lower-value ships that offer more utility.

This is classic labeling; people want to appear classy and stylish, so they buy a car they see as classy and stylish (or, in this case, a starship). CIG even explained the price point for one of the Origin ships being due to its luxurious appeal.

Pricing some ships so highly makes the other, less expensive ships appear more reasonable by comparison. This is referred to as the door-in-the-face technique.

Another technique used is the that’s-not-all technique, as some ship prices are incentivized with bonuses, including temporarily discounted prices, in-game insurance, in-game hangars, statues, and posters. As CIG points out, you don’t have to actually buy any of this stuff as it will be obtainable in-game, but from a psychological perspective all these factors work together to increase a player’s perception of value, making you more likely to buy it. I don’t think it’s unethical or unheard of, but I’ve never seen something quite like this: a pre-release game making over $164 million to date by selling virtual ships.

An optimist might say Star Citizen has passionate fans looking to support its development, while a cynic might say CIG has a skilled marketing team; a realist would say it’s a bit of both. CIG has given out refunds to some who sought them, though very few have.

I think that these methods are controversial, but if they’re what CIG needs to finish their game then, by all means, market away.

The bottom line is that Star Citizen shows great promise, but is also a great risk. The developers promise us a game of unprecedented scale, depth, and interactivity. I don’t believe that Star Citizen is a scam, but I’m also not convinced that CIG will be able deliver on this vision; the game is very ambitious, and ambition doesn’t always pay off.

Despite any concerns or disapproval I’ve expressed, I really do wish CIG the best and hope for its success, which is why I purchased a ship. I’ve backed Star Citizen and am content to wait.

That said, I haven’t put hundreds of dollars into the title, as many others have, so I’m not as much invested. If I were to make a recommendation to potential backers, it would be to consider, with caution, if Star Citizen is something you would like to support, and pledge no more than you would be comfortable losing entirely. View anything spent on this game as a both a donation and a gamble, and try not to focus too much on what you think you’re getting for it.