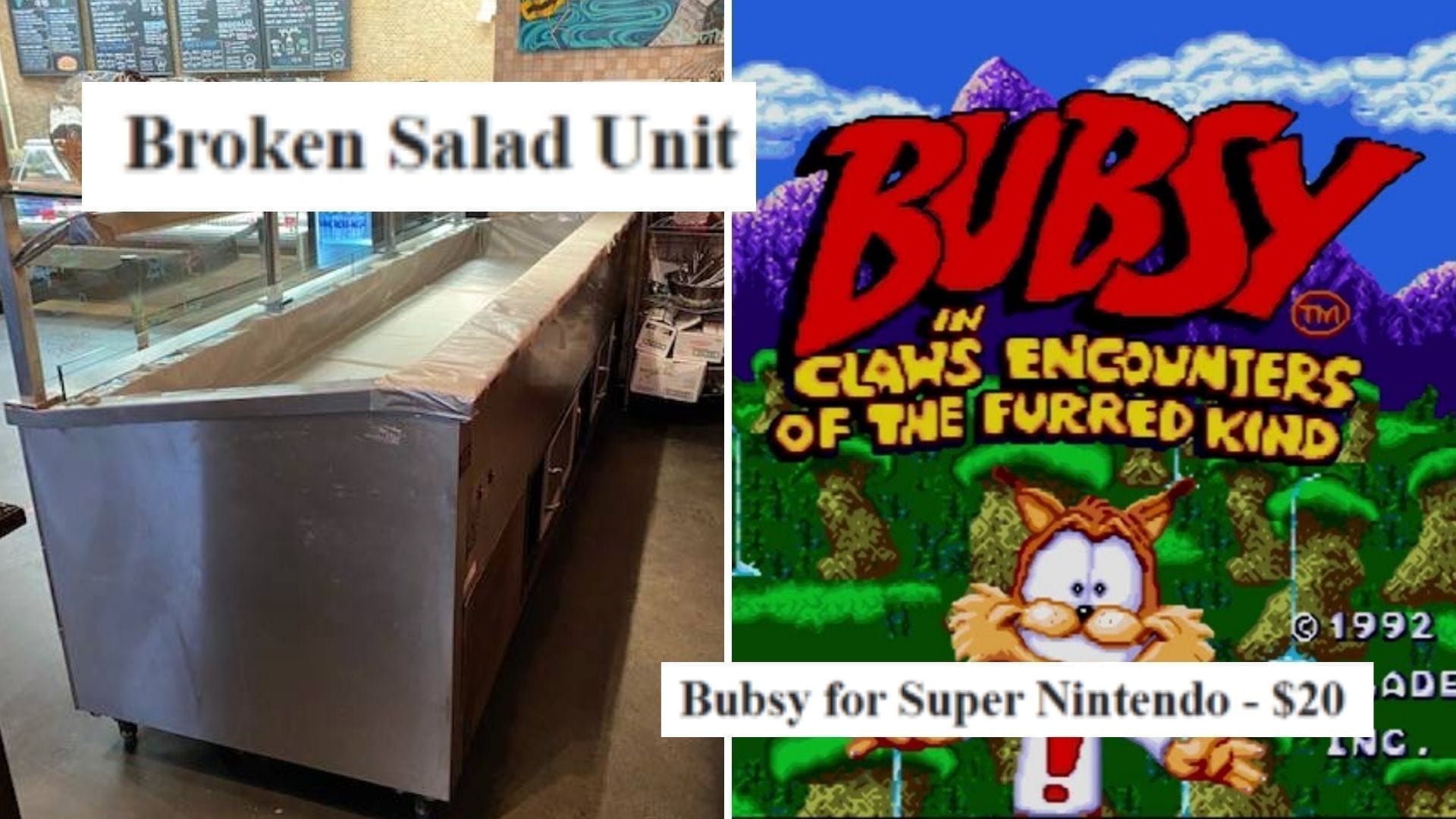 I love looking at Craigslist to see what people are offering, not even to buy stuff, just to see what bizarre things people are offering. I especially like checking the Video Games section to see what people are selling there, because sometimes it’s patently absurd. Join me, won’t you, on a journey into the most bizarre items I’ve seen on Craigslist just this last week. This list was compiled from real Craigslist postings in North Carolina. Many of these listings have been taken down, but a few do remain up for sale. Note that Game Luster does not endorse any of these items, so even if you wanted to buy some of them, caveat emptor.

Starting off fairly normal here, with a copy of a well liked game, only it costs four times as much as it would to buy off eBay. It costs even more than if you want the game with the box and manual. But we are just getting started.

This is a listing for the Collector’s Edition of Fire Emblem: Shadow Dragon. Which, yes, is a limited time collector’s item. But it’s not like it’s hard to find. Every major retailer still has it in stock and will have it for at least several more months. You’re really jumping the gun here, man. Give it it a couple years, then sell it, you might even turn a profit!

Nintendo 64 with a controller that “increases the asking price”

You’ll see this a lot with Craisglist posts. Something is way overpriced- this seller is literally asking for more than the console was worth brand new- and decided to “include” an extra that comes with the product in question to sweeten the deal. For the record, a Nintendo 64 with just the console and controller can go for as little as $15 USD, but $65 -100 is more common, maybe $150 or so with all the accessories.

Now, on the one hand, we are currently in a massive GPU drought brought on by scalpers and resellers, and in light of that, this price isn’t too bad for a GPU, only a couple hundred above retail price…. except they modified their GPU (with official hardware, mind you, but still) to only run in a water cooled loop, making it completely useless for the vast majority of gamers who don’t custom water cool their PCs. You’d think they’d realize that and market it accordingly, but the lack of details in their post suggest they are trying to see this to anyone who will take it, regardless of whether or not they know what they’re doing. Uncool, dude. Uncool.

Of course, these are fairly normal items, functional, complete, if a bit odd or overpriced. Up next are offerings that beg additional questions, like “why do you have this” or “what the heck is this listing” or even “Why is this even here at all?”

Everything about this listing is bizarre to me. The incredibly cheap price of the chairs, the empty (basement?) room they’re in, and perhaps most intriguing of all, there were only three of them. Most couch co-op games offer two, four, or even more players, so why only three chairs? Did one of the people in this couch co-op take their chair with them? Did they never find a fourth? And what’s prompting them to sell right now? I could understand at the end of the school year, but between semesters? So many questions, never any answers

Dock, Box, and HDMI cord for a Nintendo Switch (console not included)

Okay, it’s a Switch dock and cable with the original box, what’s so strange about that, you ask. Then you realize that it’s not the charging cable, but an HDMI cable. It’s not a bad deal for a genuine switch dock, but… why? Where’s the rest of it? What happened to the Switch and the power cord? We’ll never know.

S-Video Cable for the Super Famicom

So, if you’re not familiar, S-video was a video input standard common in the 90s, halfway between Composite and Component cables in terms of signal clarity and color definition. It’s not a terrible format in and of itself, it’s just basically pointless for anyone to use, especially in today’s age where even if you aren’t modifying your retro consoles for HDMI output, there’s oodles of cheaper and better Component cables for the SNES out there. I guess it might be worthwhile as a collector’s piece, but maybe at the 2000 yen the seller originally paid for it, not forty dollars.

Burying the Lede (and a free TV!)

Pi emulation sales are fairly common on Craigslist, but this one stood out to me more because of what’s not there. The listing only gives us a picture of a Raspberry Pi 3 running on a desk and tells us that it’s running Retropie. What it doesn’t tell us is the type of Pi 3, the size of the memory card, what games, if any are on the system, or even what kind of free TV there is. It doesn’t show the system running, the TV, or the X Arcade Tank Stick. Why aren’t you showing them to us? You plugged them all in, so why just the one terrible photo?

Do you need 107 Amiibos? No? Maybe just one or two? Well too bad! This guy is only selling all 107 Amiibos in his collection as a set.

Just saying, I think you’d have a better shot selling all of your collection one at a time, dude. That said, let me talk about someone with the exact opposite problem

Let me sell my entire collection (one listing at a time)

This person did the right thing, listing all of their games for individual sale, at reasonable prices. The problem is they listed their entire collection, individually.

Well, that’s not entirely true, there is a post in there that lists every single one of the games still for individual sale, but that makes the flurry of individual listings even more confusing. And why are you listing an iPhone case under video games? Which brings me to my next entry.

You might be asking why I am showing you a listing for 3 blank DVDs in an article about strange video game related finds, and the reason is because I wondered the exact same thing seeing this listing under the Video Games header of Craigslist. And why are you selling just 3 of them? List them for free, at least.

Speaking of free, let’s look at a couple honorable mentions from the Free section of Craigslist before getting to my strangest find on Craigslist.

A drafting table someone just found

Yeah, just a random drafting table someone found outside. Not even the person throwing it out. This one has definitely been taken, don’t even bother looking.

You see this a lot on Craigslist, honestly. “Here’s a free broken thing, also you need to put in a lot of work to remove it” It’s basically asking for free labor. I only include this one because the phrase “Salad Unit” gave me a chuckle

These two body pillow listings have nothing to do with one another. That contact info was different, the location was different, they were both just in the same city on the same day, and both were bizarre and horrifying. I mean, seriously, who would make these things, and further, who would put them up for the world to see? Neither of these listings is still up, and I don’t know if it’s because they were flagged as spam, or even more horrifyingly if someone claimed them. I shudder just to think about it.

Why? Why Bubsy? Why did Accolade decide to make this terrible mascot platformer? Why did they try and make a cartoon series for it? Why did they revive the series after 20 years, and why is it still getting games? And also why did you buy this game, keep it and its manual around for twenty six years? What happened to the box? How did you lose it but not the manual? That’s worth asking too, I suppose.

Have you found any bizarre or inexplicable gaming listings on your local Craigslist? Let us know!