This is the Police is a time management game available on Steam, Xbox One and Playstation 4.

I should start off by praising the art of this game. The minimalist style of the This is the Police works well with the tone of the game, and the colours within the game are faded, mostly. It seems to accentuate the bleak existence in the city of Freeburg where the story takes place.

As said, This is the Police takes place in Freeburg and follows the last working months of the police chief Jack Boyd. The game opens with a press conference where the player has to answer some questions concerning who they think will take their job when they are forcibly retired at the age of 60. Though it is quickly made evident that there is animosity between Boyd and the mayor, as he walks into his office and almost threatens our already loveable police chief. Boyd mentions the corruption within the official side of things, and how he's mad at losing his job, but he isn't violent, or even aggressive, he just sits there and takes it, even as his cigar is taken from his mouth. Pretty soon a friend of Boyd's is in trouble with the Mafia as he tries to flee and you are given the choice to help him by taking his place, working for the infamous Christopher Sand. To keep things spoiler free, I will not talk of the story much further. 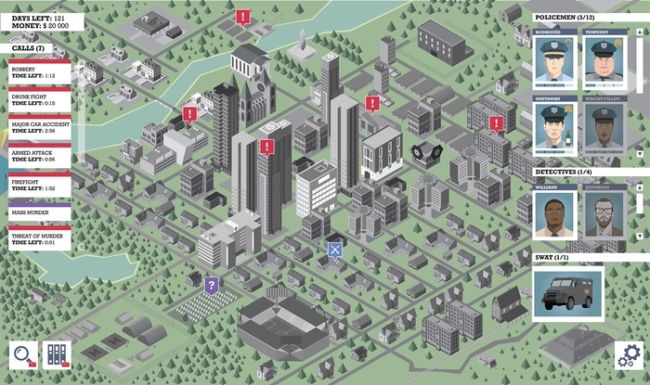 The game (as it seems) will end at day 180, as that is the duration of the rest of Boyd's career and it took an hour or more to finish the first 7, so the gamer is in it for the long haul. Boyd wants to earn $500,000 by the end of the 180 days as a retirement fund, having not set up a pension for himself. The mechanics much revolve around managing your team of officers and investigators to respond to 911 calls, and sending the correct amount and skill levels to deal with certain crimes. Skill points are also important in This is the Police, as you need skill points to issue orders to your fellow officers. A police officer's skill level is determined by "Professionalism," and the player is quickly informed that the average value for Professionalism is 150, higher numbers meaning much better officers. The game handles the "real life" aspect of the game quite well, as people request sick days, or come in drunk, among other things. Firing someone without due cause can result in legal action, though legal cause is satisfying enough. Not coming into work, being drunk on the job, age, or failing 3 responses in a row will give you grounds to fire an officer, allowing you to cycle out weak links in the chain fairly easily. On the other hand, officers (even good officers) can be killed on the job, and a funeral will be held for them several days later, but throughout Boyd's commute to work, he remarks that the people of Freeburg would "step over a corpse if it were in the door to a coffee shop." People in the city are entirely unphased by crime as long as it's happening to other people.

The game play is sound, and the story is comprehensively smooth, many real problems in Boyd's life trying to be solved, and the soundtrack is.... Lacking something, but it is mentioned you can buy extra songs with the money Boyd earns in his career, displayed as vinyl records that you can sift through at will.

I should mention something to the game's credit. I assume this is a random event during game play, but very early into the game a racist cult started killing black citizens and were very publicly threatening to do the same to any officials, be it bankers, judges, or officers of the law. One day later, City Hall ordered me to fire all of my black staff within two days, something I felt uncomfortable doing, but did so as I was told to keep my head down by the mayor, with that threatening voice I mentioned earlier, and a lawsuit quickly followed, as I had no legal grounds to do so (which quickly showed up in the morning paper, as you get three different papers each morning). I would like to think that the name "Freeburg" was chosen very deliberately to show how under control the citizens and the forces are in the city. The entire atmosphere of the game is so very oppressive that it seems you can't help but be dragged into Boyd's place at some points of the game. On the note of oppressive atmospheres, the game manages to provide genuine laughs to punctuate the grim feel overall, but not in a strictly comedic way, more through the quirks of the characters, the way they say some things, and the options you're given, as well as some of the crimes you respond to ( false alarm excuses are also a factor) punch through the monotony of Boyd's life (clearly indicated by the start of each day being Boyd starting his car, and failing a few times before kicking it into gear). Even the option to be given the tutorial is quite enjoyable, with yes being "Go On." and no being "I am a 60 year old police chief about to retire, I don't need someone telling me how to do my job" which even at that point seems something that Boyd would say.

Overall, I would say the game is masterfully handled and will definitely become one of my regular picks when I need something to keep me thoroughly entertained for a few hours. Each one of the decisions emphasises bleakness for a sort of all-encompassing feeling of "well, might as well make this good" in the sort of fruitless sense. I am very pleased to see a game from Kickstarter being so original and of such high quality.

The Playstation 4 Neo is real, will not be shown at E3