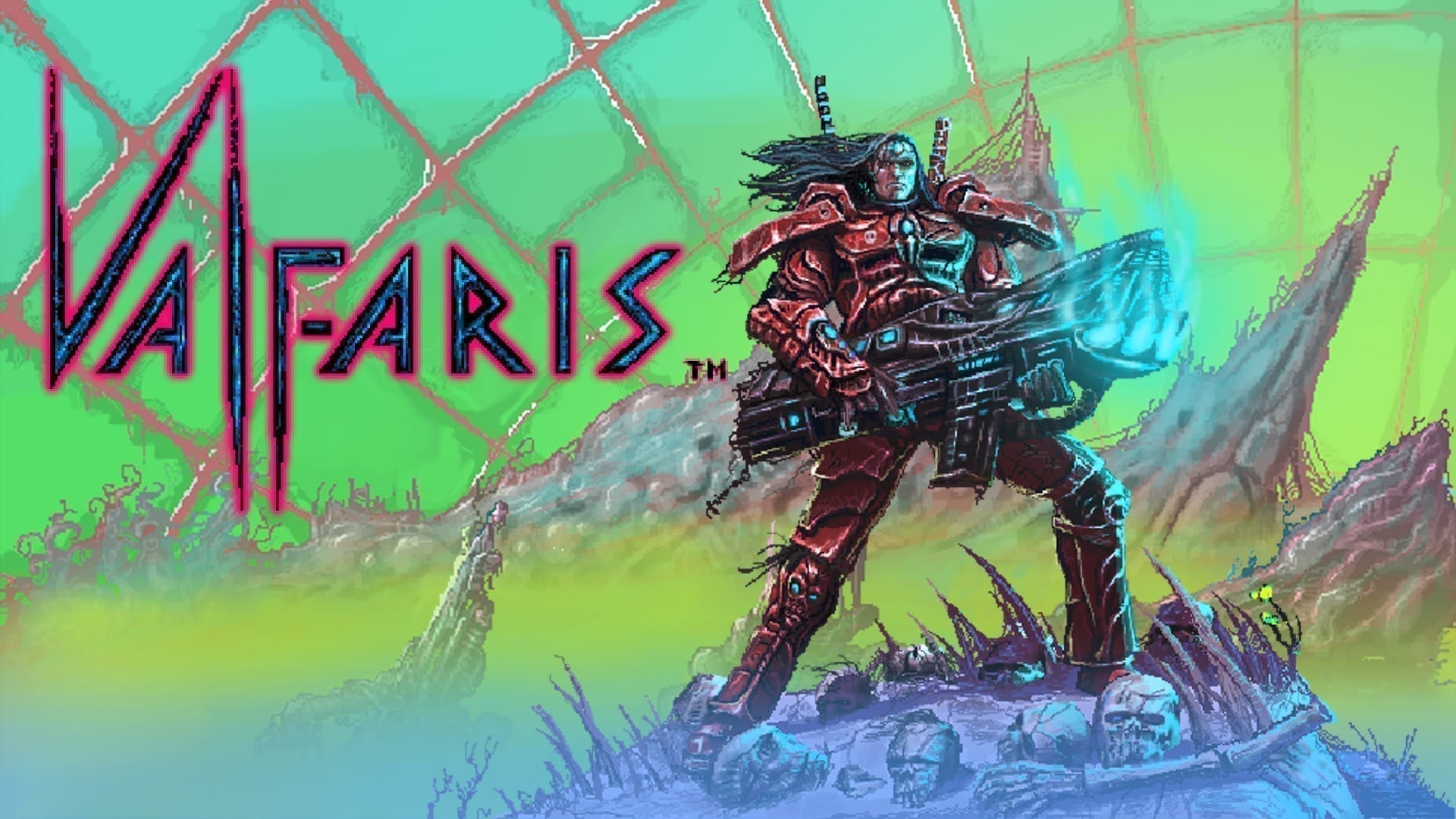 Valfaris can be easily described as a throwback to retro classics such as Metal Slug, Super Turrican, Ghosts ‘n Goblins, and Mega Man. While it doesn’t reach the heights of these classics, Valfaris does its best to emulate these games and invoke an era where video games required quick reaction, skills and were deliberately challenging.

Brought to you by Steel Mantis, who previously worked on Slain: Back from Hell, Valfaris is a grimdark sci-fi game that puts you in the shoes of a soldier named Therion. His homeworld, Valfaris, which was once an impressive citadel has been plagued by nightmarish aliens that seek to cause havoc across the galaxy if not stopped. After Therion learns about this, he takes it upon his shoulders to rip and tear every alien that comes his way.

Of course, Therion doesn’t go into battle unprepared. He is armed with a sharp sword that can cut through anything that moves and two guns with an abundance to unlock throughout the playthrough. Valfaris clearly takes inspiration from several games and adds its own touch to the gameplay by mixing both slaying through varied hordes of enemies and switching between your weapons back and forth.

While Valfaris puts a heavy emphasis on using melee weapons and guns simultaneously, it incorporates a shield that adds more action to the game. You can deflect enemies’ projectiles and their melee attacks as well as protect yourself from any enemy or boss exploding at your face. Unfortunately, despite it being very helpful, it is sadly not invincible. It tends to break after using it constantly, but killing a chunk of enemies using your melee weapon gives you blue points which in return revives your shield and your powerful sub-weapon.

In addition to its engaging combat system, Valfaris has some of the best 2D visuals I have ever seen in an Indie video game. The environment is beautifully detailed with some jaw-dropping background scenes. Frankly, I’m always amazed by the details any developer sinks into their works. Titles such as Owlboy, Foregone, and Valfaris know how to bring their fictional world to life. The visuals definitely hold up pretty well to today’s standards in terms of the world presentation and the overall epic atmosphere. One game that I could say has a similar approach is Blasphemous, and this latter isn’t just beautiful,  it is also brutal.

Additionally, the heavy metal soundtracks are absolute bangers. Guitarist Curt Victor Bryant has done a great job at composing the soundtracks, and I feel that his work has the potential to be on par with other heavy metal guitarists like Mick Gordon, Peter McConnell, and Andrew Hulshult.

When comparing Valfaris to Slain, it’s obvious that the developers have learned from their past mistakes by introducing plenty of varied enemies and bosses which I’m sure will not bore you. As you dive deep into the onerous world of Valfaris, you’ll encounter ultra-tough bosses that exist only for one thing, to kill you. If you’ve played Contra 3, you will notice how both of these games have some of the craziest bosses and enemies in the history of gaming. Maybe the developers of Valfaris have taken inspiration from that too? Because they kind of both share the same vibes.

Valfaris is not a walk in the park, but it’s not as hellish as brutally difficult games such as The Adventures of Batman & Robin on the Sega Genesis. You will die many times, but the game will do its best to make you a better player as you progress. Hordes of enemies keep spawning left and right endlessly and your option is to slash your way through them to reach the checkpoint. The checkpoint restores your health and is also used as a tool to upgrade your 3 main weapons using Blood Metals. Honestly, because of the constant rushing to the checkpoint, Valfaris felt as if it was a horror video game as well.

Of course, Therion doesn’t only have 3 weapons under his belt the whole time. As you progress, you unlock more weapons. For example, a flamethrower, a rocket launcher, a plasma beam, and so much more. All of these weapons add variety to the gameplay that I’m sure will not bore you.

While I loved my time with Valfaris, there are some downsides that were pretty annoying. First, the inconsistent spawning of enemies is extremely annoying. I found myself rushing my way through hordes of enemies coming from both sides while praying to reach the checkpoint. Second, I also believe that the developers could have implemented the ability to ledge climb. It would have made things much easier. And finally, insects are one of the worst creatures you will encounter in the game. They’re just nasty.

The difficulty can also be considered an issue, but if Valfaris was an easy game, it wouldn’t have been a throwback to retro classics. Valfaris comes packed with all the mechanics and philosophies these games had. One of them is how Valfaris nudges you to get better as you progress. Each death in the game makes you better, quicker, and cleverer. You won’t notice this until you’re done with the game and replay it again. Only a handful of games made me feel that way. The sensation of becoming stronger and wiping the floor with anything that comes your way is not something you see in any game.

Overall, when comparing Valfaris to Slain, the aforementioned is a step forward from Steel Mantis. The developers have perfected the overall look of the game, and the controls have been drastically compared to Slain. Plus, the metal soundtracks know how to lure you into action after you’ve promised yourself you’d quit for the millionth time.

I do believe that other developers should take some inspiration from Valfaris and Slain because of their heavy emphasis on gunning and slashing through a horde of enemies. The latest game I felt had closer similarities was Blazing Chrome, but even that latter couldn’t fill the empty feeling I had when finishing Valfaris.

A Run & Gun video game usually reaches its peak when it succeeds at sending massive adrenaline to your body by incorporating high-quality action with endless waves of enemies. The Run & Gun genre is pretty underappreciated these days compared to the SNES/Sega Genesis era, but I do believe that Valfaris and other titles I have mentioned manage to draw old and new gamers to this realm.

At the end of the day, Valfaris may become annoying at times, but it’s definitely a great game that you’ll be coming back after a while only to experience the 90s era where video games were made in hell. I also think that the game will interest those who are die-hard metal fans. If you’re a fan of Run & Gun, it’s a recommended choice, and despite being released back in 2019, it will still awaken the alien inside of you.