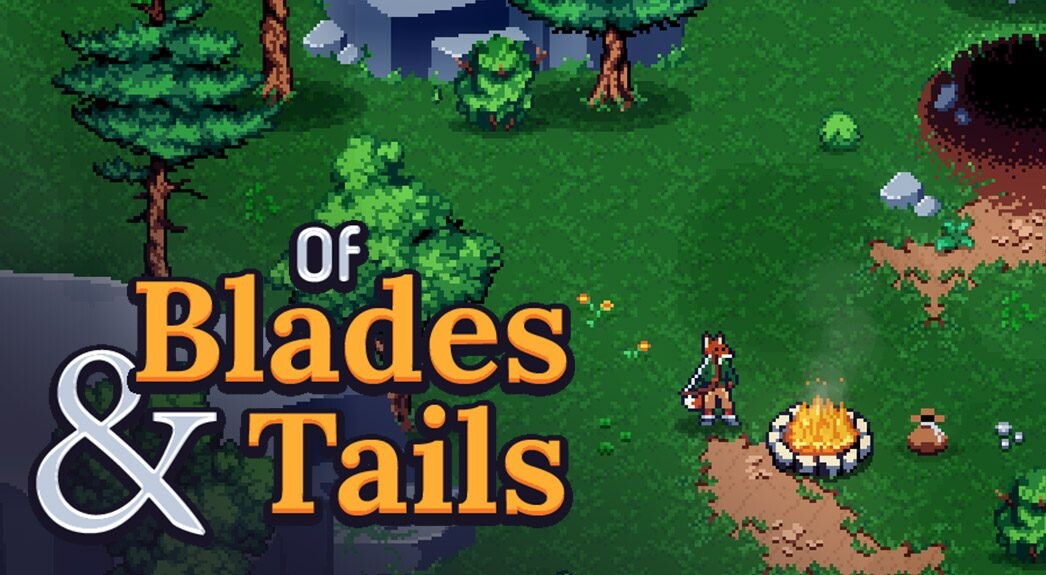 Suppose Diablo had gone turn-based, a grim and Gothic take on Secret of Mana or the earlier Final Fantasy games. What would that game have been like? That is perhaps the question being answered in Of Blades & Tails, and the answer appears to be “excruciating.”

Of Blades & Tails is an indie RPG put out by a solo developer, Felix Laukel, and which has recently come into Early Access release on Steam. It puts you in the boots of Reik, an anthropomorphic fox adventuring in a world where humans wiped themselves out and other creatures inherited the Earth. You’re tasked with exploring the world, meeting interesting creatures, and generally killing them for loot. According to the game’s Steam page, the main storyline is “still in the making,” and that may be the biggest understatement of the year.

Using a style reminiscent of 16-bit JRPGs, Of Blades & Tails has a decided sense of retro charm to it, though the visuals kind of interfere with navigating through the wilderness in some respects. What you think should be a navigable stand of trees ends up being an obstacle you have to go around. There’s not any transition animations for combat. Basically, you’re walking through the woods, and when an enemy pops up, you can run or start hacking away (or shooting if you have a bow or wand). A simple health bar above each combatant’s head tells you how close to death they are, and status effects for your character show up at the top. Creature buffs and special abilities have their own little animations to show off, but it doesn’t overwhelm.

I can appreciate that, being a solo developer, one is limited in their resources as far as music and sound effects go. And to the developer’s credit, the music isn’t bad, though it is repetitive and starts to grate very quickly. As for sound effects, though, those grate almost immediately. Using a sports whistle to mimic bird calls isn’t a bad idea in theory, but the execution needs a lot of work. The characters you interact with have their own “Simlish” language which appears in English, but it doesn’t quite have the right feel to suggest an actual language as such.

The gameplay is where Of Blades & Tails completely drops the ball. Flat out, this game is not fun to play at this point in time. If it was an action RPG which followed the model of Diablo, but kept the JRPG aesthetic like the early Zelda games or The Guardian Legend, that’d be one thing. If it went full JRPG like Secret of Mana, that’d be a different thing. But either one would have the virtue of being focused. As it stands right now, the “turn-based ARPG” system which sounds fun in theory is proving to be a complete pain in practice.

Moving one square in the game, that’s a turn. Swinging a sword, that’s a turn. Swapping weapons from ranged to melee because (gasp!) the enemy charged you and is now right up in your face? Yup, that’s a turn, and it’s basically a freebie hit for the enemy. You want to try and escape? That’s a turn each step, and it sucks. Particularly when you literally cannot outrun enemies who subsequently murder you whether you try to run or fight. Damage scaling feels ridiculously lopsided. Even when you’re going into areas which the world map indicates are “low” threat, you’re still likely to get your ass kicked. The UI is not particularly helpful, and having to look up keybinds when you’re in a fight to remember how to swap weapons is extra lemon juice on the salt-rubbed wound.

It’s been a while since I’ve been this frustrated with a game. It’s taken me far too much time to log just a single hour in Of Blades & Tails because it has been just that much of a struggle to find the fun needed to propel me further into the world. And in the end, I still haven’t. Whatever lofty goals or ambitions may be set out for this project, I have a hard time believing it’s going to come even close to reaching them if this is all the further it’s gotten after a year in development by one person. There are more polished action RPGs and JRPGs out there. Of Blades & Tails is not anywhere close to their caliber yet.

Axel played Of Blades & Tails on PC with an early access code.

Of Blades & Tails
/
A Bad Turn

"Of Blades & Tails" wants to be experimental with its "everything turn-based" system. But the experiment has clearly failed, being aggressively unplayable despite its not-unimpressive visuals. Two years from now, it might be playable, but don't hold your breath.

1/10: Lackluster - Axel Does Not Recommend
About GameLuster's Reviews