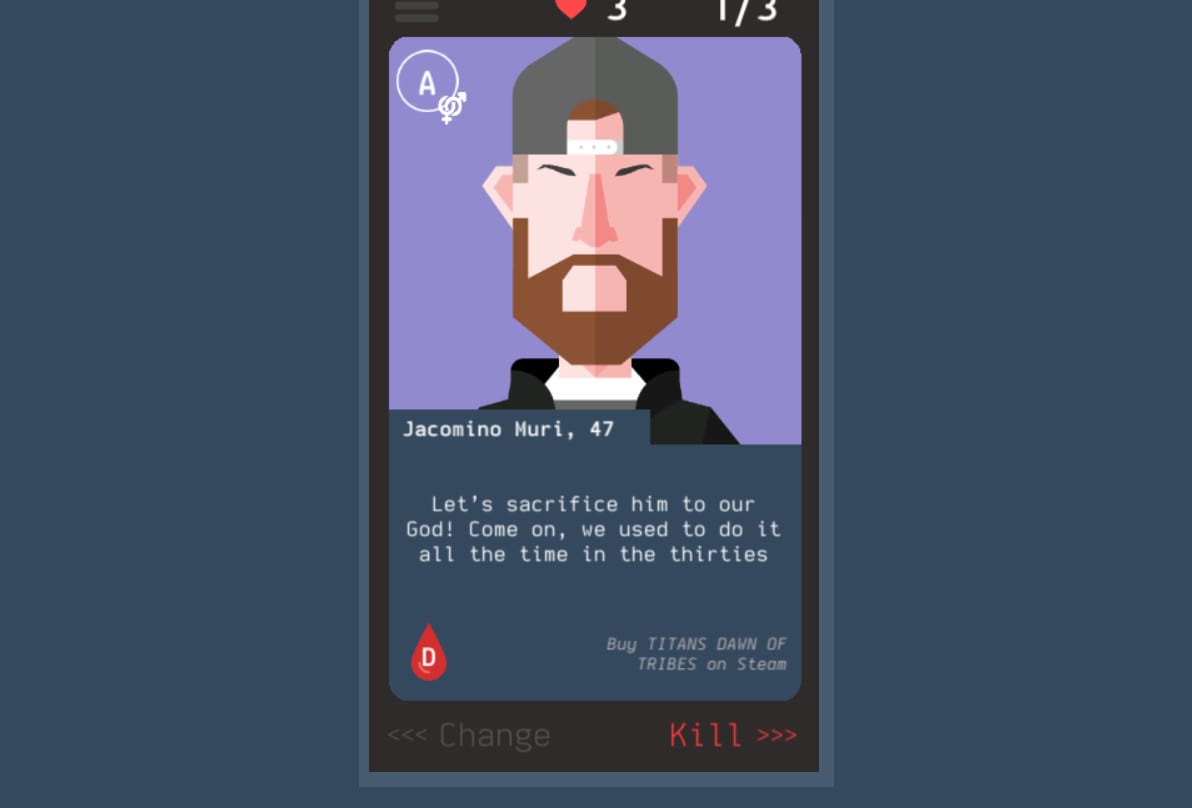 There’s plenty of games out there that inevitably slip under the radar. For Friday Freebies, we suggest a game every Friday that’s free of charge!

“It’s like Tinder but you have to BUST the murderer.” This is developer Cyberpan’s simplified description for Not Me!, an online interactive card game where you play as a district attorney in charge of killing murderers.

In each round you are presented with a series of suspects. Every suspect has their own alibi, age, photo, gender and blood type. Your job is to analyze each person and determine if they’re the murderer. If you think they’re guilty, swipe left to kill, or swipe right to shift through your options. Still unsure about who the culprit is? Well, you might have to kill some innocent people and solve the level through process of elimination. When it comes to playing this game, smaller sacrifices must be made for the greater good.

If you kill an innocent person, the game will provide a helpful hint, like “The killer is male,” or “The killer doesn’t have a beard,” or even “The killer has a common blood type.”  You’re given a set number of chances that you can kill people, and this number increases each level that you play.  If you run out of chances, the police come to arrest you. If you win, you play the next round. The more rounds you play, the more people you have to sort from, which increases the difficulty.

When I started off, it was pretty easy to identify who the murderer was.

“Let’s sacrifice him to our God!” my first suspect declared in his alibi statement. “Come on, we used to do it all the time in the thirties.”

It did not surprise me when I won that initial round. I mean, if all the suspects were going to make obviously murder-y statements like that, this was going to be easy. But I fooled myself into thinking that. As I progressed from the second to the third level, it soon became harder for me to figure out who the murderer was.

Occasionally, I encountered suspects who gave me a suspicious statement such as “My drug test came back negative. My dealer sure has some explaining to do,” which made me think that that person wanted to kill their drug dealer. I received another statement that read, “I am originally from Indiana. I know what most of you are thinking: Indiana-mafia.” Mafia member? Probably killed someone.  Imagine my surprise when the dude who said, “I tried to change my password to penis but they said it was too short,” ended up being the killer.

The descriptions became serious red herrings and impaired my ability to accurately identify the suspect. The true key to playing this game is reading the clues carefully and jotting them down. I tried to keep track of them in my head, but this inevitably led to my downfall. I never got past the fourth round of the game. Still, I appreciated the challenge that the game presented and its humorous nature, and I think that other players will too.

Cyberpan made the game for the 43rd Ludum Dare Game Jam, which is one of the world’s largest and longest running game jam events. Participants of the game jam are required to make a game entirely from scratch within the course of a single weekend. Developers are also required to adhere to an established theme, which was “Sacrifices must be made.” Given that I killed a lot of innocent people, I would say that Cyberpan did a great job in addressing that theme. It’s also nice to know that it’s best that I never become a district attorney. Sorry for dashing your hopes, Mom and Dad.

You can play Not Me! on itch.io.