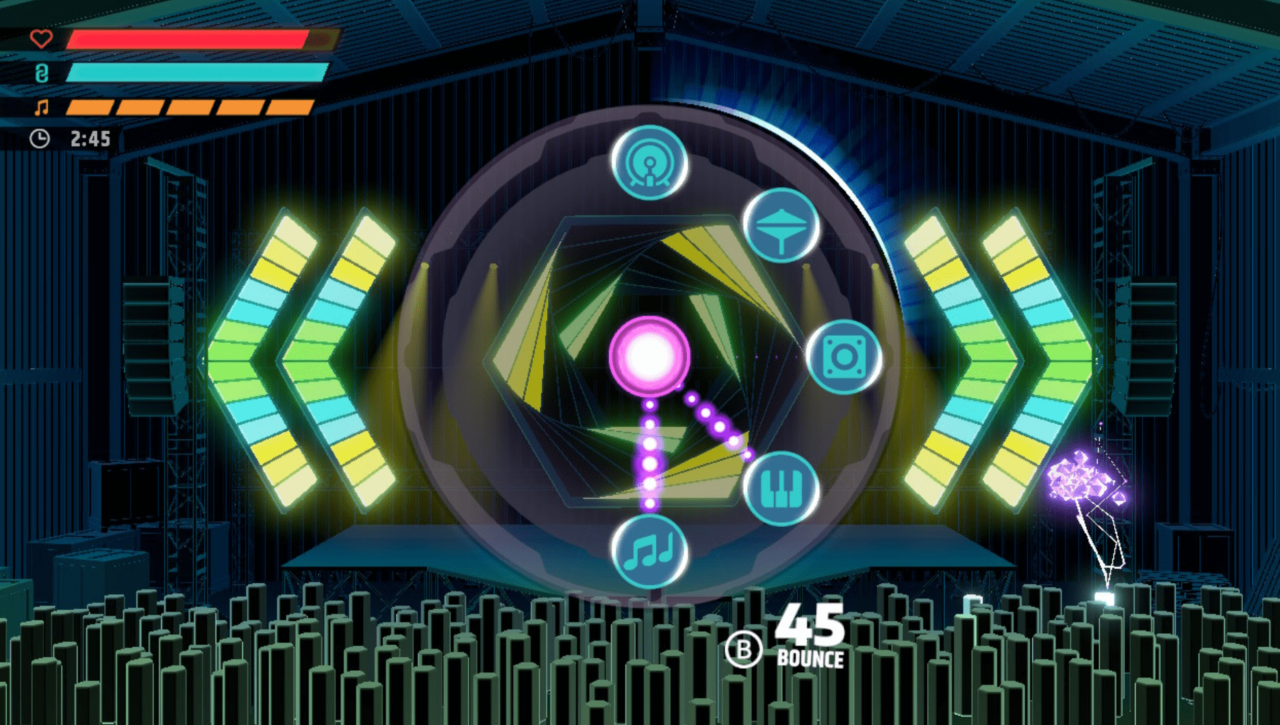 I first connected with David Ventura during the IndieCade 2020 virtual convention. Despite the non-physically-present nature of the event, David seemed to be practically everywhere – hosting a panel here, intensely discussing game music there, previewing his studio’s new offering Hexagroove: Tactical DJ over here. With David so highly in demand – plus the annoying time difference between us – it took quite a while for me to properly connect with the man of the hour.

Here is a recap of that long-awaited chat, in which Ventura shared the amazing story of his journey to bring the worlds of gaming and music together. A review of Hexagroove will also be forthcoming at a later date.

My first impression of David Ventura is “a man who loves music”. His room is absolutely packed with musical paraphernalia, from Hexagroove posters and promotional material to a clearly well-used and well-loved guitar resting in the corner. To my surprise, when I asked him where his passion for music really got started, he concisely answered “In college”.

Ventura was only a casual music fan for most of his life, he told me. He chose to take elective classes dealing with electronic music in college, which is where his love for the genre truly began. “It started at university in America,” he explained, “but then it took me all around the world.”

This was not an exaggeration. Following his graduation, Ventura worked in Japan for several years, starting out in Kyoto with an internship for a company developing stuffed animal-like robots which could be used to teach children how to play music. Following his time in Kyoto, Ventura moved to Tokyo, where he got a job with iNiS, a Japanese developer which specializes in rhythm and music games. During his ten years with the company, he worked on popular titles including Osu! Tatakae! Ouendan!, a rhythm game starring a cheer squad which supports troubled people, and Elite Beat Agents, which features members of a government agency encouraging their clients through dance. He also worked on the karaoke series Lips, which brought Japan’s most beloved pastime to the Xbox 360 console. He also worked with Ubisoft on The Black Eyed Peas Experience, a dance game in which players can learn the choreography to all of the band’s most popular songs.

After his time in Japan, Ventura made his way to Stockholm, Sweden, with the goal of creating projects which supported music education. His first job in Sweden was with Propellerhead Software, responsible for the “digital audio workstation” software Reason. He worked primarily on the studio’s smartphone app projects, including the iOS version of Reason, Take, an app for recording song ideas, and Figure, which utilizes touch screen technology to help musicians compose short sound loops.

In 2018, Ventura and some of his coworkers ultimately separated from Propellerhead to form Ichigoichie (151A), a studio which draws its name from a Japanese phrase meaning “one single chance in a lifetime.” The studio’s projects so far are GaMBi, an iOS which makes a large library of video game sounds and music available to DJS, and their first game, Hexagroove.

Billed as a “tactical DJ experience,” Hexagroove is a game which strives to bring unique elements of strategy to the music game genre. Players use the existing rules of music and music theory to express themselves by creating musical pieces using over 720 available loops. Available music is drawn from Swedish, Japanese and Netherlands-based sources across 15 different genres of dance and electronic tunes. Players even get the chance to learn tricks employed by real life DJs to make their sound even smoother, catchier and more memorable!

When I asked Ventura what motivated him and his team to create Hexagroove, an enormous smile immediately broke out on his face. “I wanted to inspire people to become DJs, or any other kind of musician” he said simply.

That, in the end, is what Hexagroove is all about: simplicity. While it’s far from an easy game, and certainly comes with quite the steep learning curve of its own, Hexagroove removes all the “buttons, knobs, bells and whistles” associated with DJing and creating electronic music and replaces them with an intuitive, flowing interface based on real building blocks of creating and mixing music.

While I didn’t want to take up too much of Ventura’s time, I could have easily stayed on that call talking about music with him for hours. He is a man whose passion shines through in every word – when I asked him a “warm-up question” about his favorite karaoke songs in order to calm my own nerves, his eyes lit up. “I sing everything,” he told me, and then proceeded to list a number of tracks from Ouendan and Elite Beat Agents, European electronic and hip-hop tracks, and Japanese enka songs (a traditional, soulful style of music which is typically a big hit at karaoke bars). “I like to sing so many different things, but my coworkers, they always wanted to hear [John Denver’s] Country Roads,” he admitted, an experience I too was familiar with from my own fond memories of karaoke.

Ventura concluded the interview with the following statement: “I want to thank all of the wonderful artists, programmers and interns from Japan, Stockholm, and throughout Europe. It took people from all around the world to make this game a reality.”

Hexagroove: Tactical DJ is available now via Steam and the Nintendo eShop. Regular updates are provided via the game’s Twitter. Ventura himself can be found on Twitter or organizing electronic music events in Stockholm – catch him at chiptune event Syntax Error as soon as in-person gatherings are allowed again!