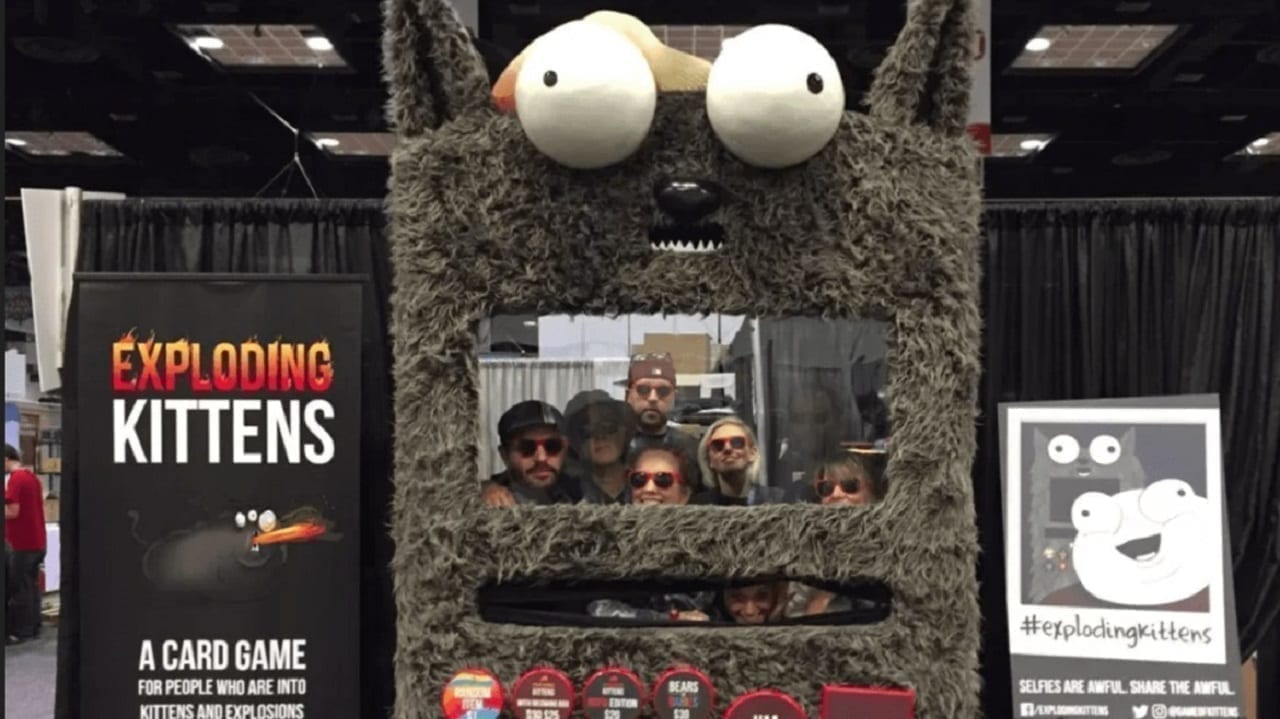 Elan Lee has made a lot of games. He’s responsible for The Beast, considered to be one of the world’s first alternate reality games (ARGs). He’s worked with Xbox. In recent years, he’s turned to the world of tabletop board and card games, helping create the award-winning Exploding Kittens as well as fun, unique titles including Bears vs. Babies and Throw Throw Burrito. However, when Elan (as he insisted the audience call him) stopped by to host a virtual Zoom panel at IndieCade 2020, he revealed to listeners that what he considers to be “the best thing he ever built” wasn’t a game at all.

Instead, presenting to an audience of indie developers, members of the press and con attendees – all encouraged to un-mute our mics so Elan could hear our laughter, gasps and other genuine reactions – the superstar developer cracked an “aw-shucks” grin and displayed a picture of a giant, fur-covered….something.

The Booth Where It Happens

The object, as it turns out, was a vending machine. Crafted from a refrigerator box and decorated to resemble one of Exploding Kittens’ adorable feline characters, the machine was Exploding Kittens’ (which is the name of both the game and the company which produces it) response to the traditional, rarely altered “convention booth” format. To use the machine, con attendees merely had to insert cash and press buttons representing the company’s games, game expansions and themed merchandise. The vending machine has appeared at gaming and entertainment events over the past few years, including GenCon, PAX West, and many others.

Still sporting that same sheepish grin, Elan shared the machine’s secret with the panel’s rapt audience: it was less of a “machine” and more of a “giant vending machine costume.” Inside the machine were Elan, seven other members of his team, and an absolutely enormous stack of inventory. Some team members took the cash, others dispensed the games, while still others held up handwritten signs bearing friendly messages such as “Have a nice day” and “You’re my favorite customer.”

Sure, the vending machine was unique. Wherever the team took it, their creation stood out amidst a sea of nearly-identical booths. But what led Elan to name this fur-and-refrigerator-box contraption “the best thing he ever built?”

“It was one button,” Elan explained. “We added one button to this thing that made the whole experience special.” The button in question? A bright, rainbow-colored offering which read simply “RANDOM: $1” and was capable of dispensing…well, absolutely anything a con attendee could possibly imagine.

Prior to each convention, the Exploding Kittens team would hit up supermarkets, dollar stores and the Internet to purchase several thousand appropriately random items, which would then be dispensed to utterly delighted customers. When asked to provide just a few examples of what his wondrous machine could give out, Elan mentioned pineapples, potatoes, bananas, pool noodles with jokes written on them, mops, toilet plungers, and even watermelons and other extra-large produce.

The supply of random items was not set, and would change throughout the event depending on what people responded to best. Towards the end of the event, as the line to press the “Random” button grew longer and longer, the team was even able to customize offerings for individual customers. For example, a woman wearing a Daenerys Targaryen (Game of Thrones) costume received a “dragon egg” in the form of a rhinestone-bedazzled melon, while a young girl who had written a love letter to the machine was gifted with a dozen red roses in response.

Elan compared the constantly changing options to the process of machine learning, in which an AI gains new information with each human interaction and re-purposes that knowledge for future conversations, therefore constantly improving each and every time it speaks to a human. While the feline vending machine was at its heart a simple construction of boxes and other craft supplies, it ultimately became a surprisingly effective model of the process by which an AI functions. Educational AND fun!

In the end, what was the Exploding Kittens team’s primary reason behind creating the machine? Did they want to “go viral” on the Internet? Sell more copies of their games? Become the booth that everyone would be talking about long after the convention ended? While all of these were definitely nice bonuses, Elan’s true reasoning was a little more complex than that.

His goal, the developer happily explained as he clicked through a slideshow of fans joyfully interacting with the vending machine, was to create an interaction where the person, not the machine, would be at the center. While the vending machine was the method by which the random item was delivered, as soon as the item appeared through the cat’s “mouth,” the spotlight was no longer on the delivery method itself. Instead, the focus was on the person who had just received the item. What did they get? How are they reacting? Are they laughing, playing around, or taking a photo? Sure, receiving a potato from a random vending machine at a convention can it itself be a funny thing, but what becomes even funnier is when the person who got it puts it on their head and dances around while taking selfies with it.

This is the philosophy at the core of every game which Elan and his team design. While Beard Cat, Tacocat and the other characters of Exploding Kittens are memorable, the true humor in the game comes from how players react to one another. In the more recently released Throw Throw Burrito, where players are reacting to a physical object – in this case, a squishy burrito flying across the “battlefield” towards them – this is even more clearly on display. The burritos themselves are barely amusing. The idea of flinging a burrito at your spouse or your best friend? Hilarious.

And the Results Are…

Was the “best thing [Elan’s] ever built a success?” The fans surely thought so! At each convention where the vending machine appeared, a huge line quickly formed as attendees eagerly waited to discover what random item they might receive. At one event, Elan related, the crowd got so bad that the team could not properly exit the machine, forcing them to label a large section of the showroom floor as “Lava” to keep those waiting in line away from it (Thanks for the idea, Elan – totally going to steal this to keep people away from the fridge when I’ve got a box of Thin Mints in there).

Hopefully, Elan’s panel inspired some of the game designers, writers, artists and developers present in the audience to create something using his “player-focused” model – personally, I would love to play more games like that in the future. I also hope that the vending machine will continue to make appearances at conventions following the COVID-19 pandemic – I can’t wait for a chance to draw a random item myself and see what I get!