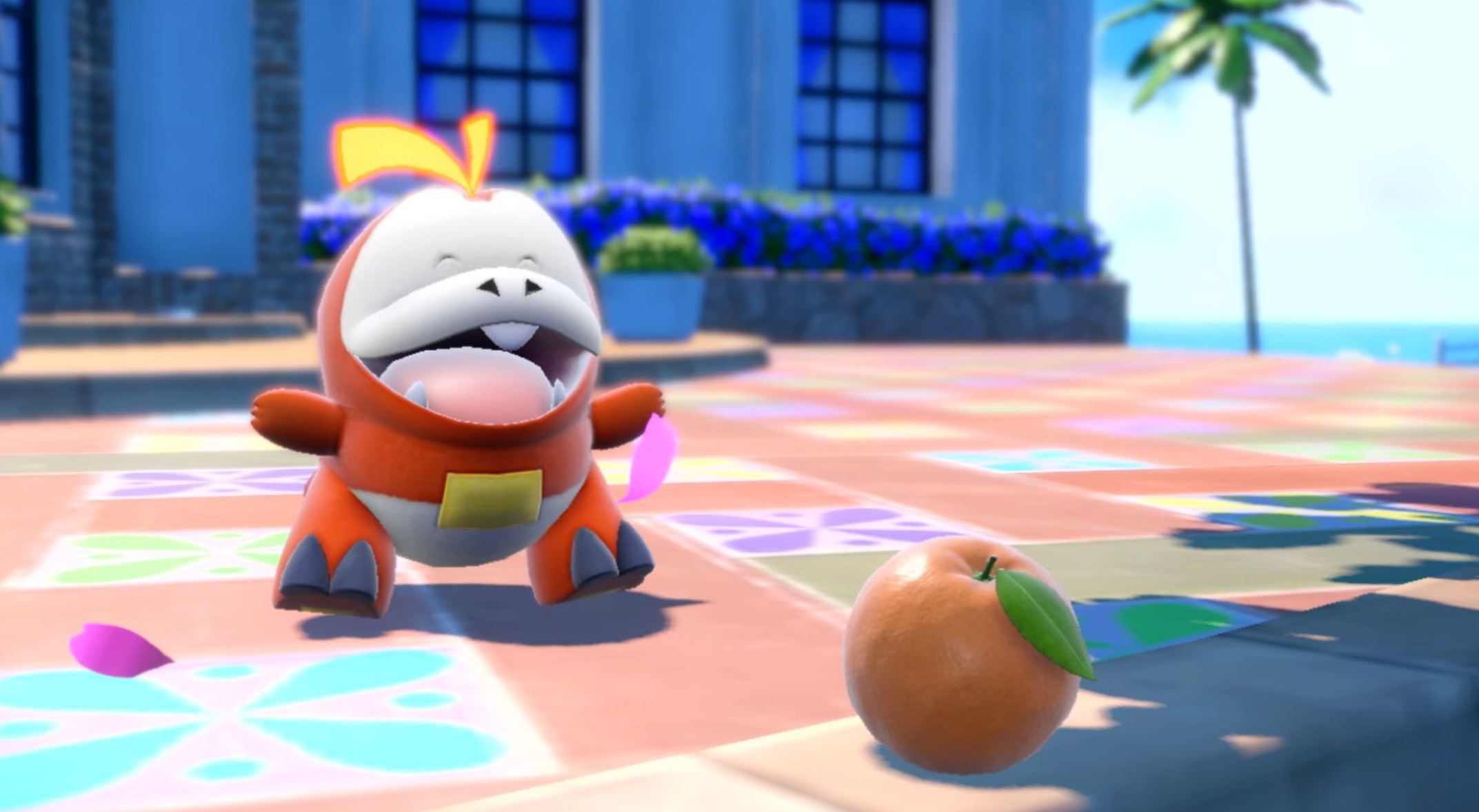 With the release of Pokémon Scarlet and Violet on the horizon, fans are eagerly awaiting any news regarding the upcoming ninth generation of main series Pokémon games. So far, very little has been revealed. Alongside the starters – Fire-type Fuecoco, Water-type Quaxly, and Grass-type Sprigatito – only a handful of new Pokémon have been revealed, including the adorable Smoliv and Lechonk. Even the games’ region does not yet have a name, although fans have theorized that it draws inspiration from either Spain or Portugal.

As so little official information has been revealed, rumors, leaks, and hints have been plentiful on the Internet. One leaker, Riddler Khu, has been known in the past to deliver accurate information regarding previous Pokémon titles. Khu recently shared a hint regarding a potential Hidden Ability possessed by the Fire-type starter, Fuecoco.

Khu’s hint took the form of a short GIF from a previous trailer, showing an excited Fuecoco receiving an apple as a treat and happily chowing down. This has caused fans to speculate that Fuecoco will possess a Hidden Ability related to eating Berries, with Gluttony and Ripen being the most popular choices. Ripen is currently exclusive to the Applin line from Pokémon Sword and Shield. However, the ability could be a relevant choice for Fuecoco, as the Pokémon appears to be based on some sort of fruit or vegetable in addition to a crocodile.

Both abilities are extremely powerful in the world of competitive Pokémon battling, as Berries are an item very frequently taken into the arena. Gluttony causes health-dependent Berry effects to activate earlier, triggering when the Pokémon has reached 50% of its maximum health rather than 25%. Ripen doubles the effect of any held Berries in battle. If either of these are indeed the Hidden Ability of Fuecoco, it is likely that this Fire-type Pokémon could be extremely popular among competitive players.

Other possibilities for Fuecoco’s Hidden Ability include Thick Fat, Harvest, or Cheek Pouch. Cheek Pouch restores health when the Pokémon eats a Berry, Thick Fat increases its defense against certain moves, and Harvest allows it to restore a previously used Berry at the end of a turn. Harvest in particular would be a unique choice, as it is primarily associated with Grass-type Pokémon rather than Fire-types such as Fuecoco.

Hopefully, Fuecoco’s true Hidden Ability will be revealed when Pokémon Scarlet and Violet release on November 18, 2022 for the Nintendo Switch. For more on all things Pokémon (or just more berry interesting news), stay tuned right here at GameLuster.