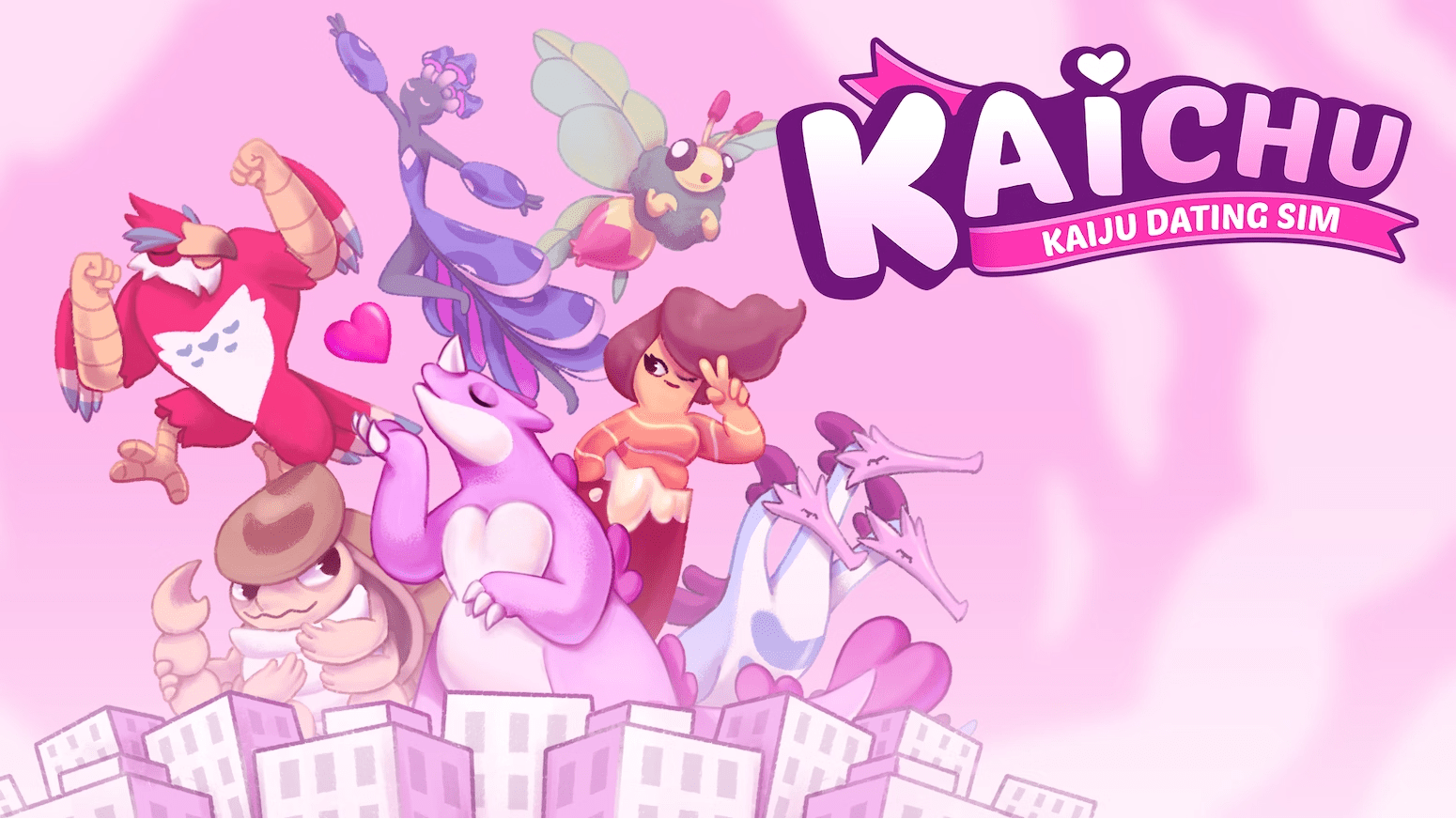 As a colossal fan of kaiju, I was interested from the moment Top Hat Studios revealed that they would be publishing Kaichu – The Kaiju Dating Sim from developer Squiddershins. As the title would suggest, this is a dating sim but with kaiju instead of your usual human characters. Sadly, Kaichu has about as much depth as I imagine a lake would have from the perspective of a kaiju.

Now don’t go into Kaichu expecting the usual massive, menacing, and monstrous kaijus. The game goes for a much more loveable approach. It’s a dating sim after all, not a fighting game. This isn’t exclusive to the designs of the kaiju of course, the whole game has this very cutesy art style with lots of bright pastel colours and hearts everywhere.

Kaichu is framed through news broadcasts that cover the different dates the kaiju go on as they visit, and destroy, different landmarks around the world. The news anchors’ primary function is to give us exposition. That might mean giving us backstory for the different kaiju, explaining the larger events surrounding the kaiju that are happening in the world, or simply translating the interactions between the kaiju.

So let’s talk about the actual dates since that’s what you’re playing Kaichu for. The problem is, there isn’t really much to talk about here. You can choose which kaiju you want to date and then you choose at which landmark you want to have the date. Where you decide to have the date won’t really change all that much, by the way. You’re then asked a series of questions, and have three possible answers every time that roughly translate to yes, meh, and no. Then, depending on whether or not you answered correctly, you will destroy part of the landmark. If you manage to destroy the landmark before the date is over, that’s a successful date and your relationship increases. Over time, you will unlock more information about the kaiju you’re dating through your little log book that can help you answer future questions correctly. Although, most of the questions are quite easy to answer anyway.

I need to come back to the news anchors again for a second. As I mentioned before, all the interactions between the kaiju are explained by them. This sadly takes away from the personalities of the kaiju themselves, since we only ever hear about them through other people. And they don’t have that much to them beyond the basics; they’re a plant kaiju so they like nature, anyway. It also doesn’t help that the news anchors aren’t voice-acted, even though their dialogue makes up the majority of the game. On top of that, the animations that play during and at the end of the dates are always the same, so it ends up feeling like not much is changing.

I guess calling Kaichu a bad game wouldn’t be entirely accurate. It looks nice and performs fairly well. But it just doesn’t do enough. A single playthrough takes roughly 30 minutes and even then it starts to feel a little samey towards the end. Kaichu is simply lacks depth. Quite frankly, I even struggled to find things to write about for this review.

Nairon played Kaichu – The Kaiju Dating Sim on PC with his own copy. Kaichu is also available on Nintendo Switch, PlayStation 4 and PlayStation 5, Xbox One, and Xbox Series S and X.

Kaichu isn't exactly a bad game, but it's one that's simply lacking in many ways, most of all depth.