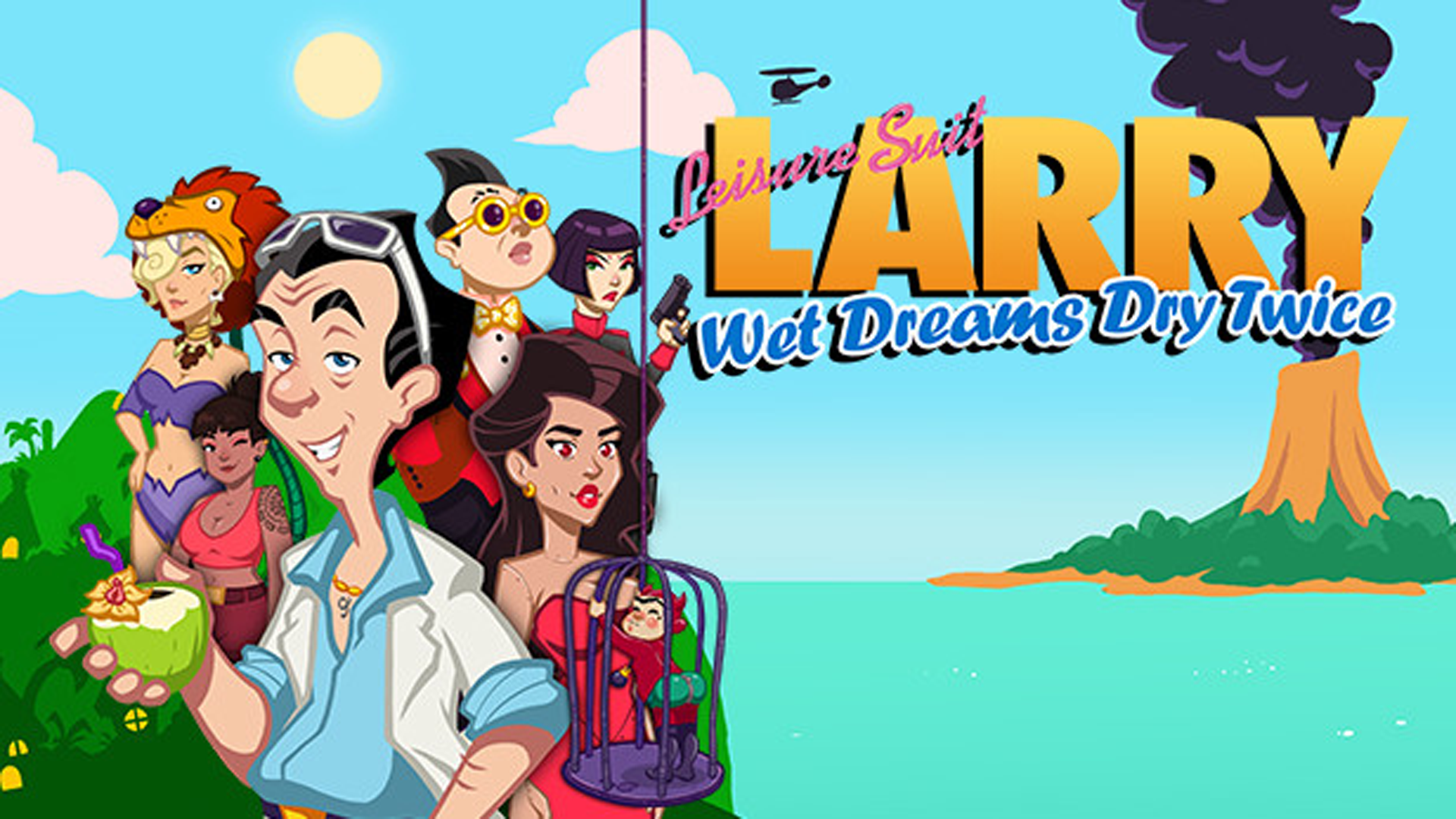 Back in 2018, CrazyBunch and Assemble Entertainment rebooted the classic point and click adventure series, Leisure Suit Larry with Wet Dreams Don’t Dry. This funny and clever satirization of romantic culture in the age of smartphones and dating apps ended up being one of my favorite titles of that year with its clever dialogue and hand drawn cartoon style. This year, the team is ironing the leisure suit and getting ready for round two with the sequel, Leisure Suit Larry: Wet Dreams Dry Twice.

Wet Dreams Dry Twice is a direct sequel to the first game, and starts off in the exact same location as we left off in. It’s alright if you haven’t played the first title, because the game offers a handy recap, which is always an appreciated option. In summary, after attempting to woo the lovely Faith from Prune Software by blowing up her villa and accidentally sending her unconscious body out to sea, Larry Laffer receives a mysterious text message from her and vows to go find her. After building a raft out of junk, Larry and his trusted smartphone assistant, Pi, wind up on an island resort in the middle of an archipelago, which is where the majority of the game takes place.

So from here, I expected the game to follow the usual formula of Leisure Suit Larry; exploring a tropical resort filled with beautiful women and striking out with them in a variety of comical ways until we end up using all of the things on other things we need to wind up with the one main girl we’re truly searching for. Except it doesn’t really do that. Larry actually ends up successfully scoring with several women on these islands, and there are quite a few he doesn’t even try to date. All of this is happening while the new head of Prune, Mr. Wang (who looks a lot like PSY, the Korean musician best known for Gangnam Style), is also looking for Faith so he can unlock the secrets of her A.I. algorithm. He does this in the form of a sexy but deadly assassin named Yanmei who seems convinced that Larry is actually a secret agent because it makes no sense that he could combine a rubber duck with a six pack ring to make an elaborate chicken trap. Speaking of combining, one new mechanic that I greatly enjoyed in Wet Dreams Dry Twice is the blueprint app. When certain objects require multiple materials to be made, you’re given a blueprint that gives you a list of what types of objects you need to construct something bigger.

I definitely found myself laughing at some of the absurdities in the game, like using paint and air fresheners to try and clean a pool, or using an orange flavored condom as a cocktail ingredient. If you’re looking for crazy and raunchy humor that doesn’t take itself too seriously, Wet Dreams Dry Twice will have you covered. Every location is hand drawn in an awesome cartoony style with tons of subtle details that just look great. Something about the game that felt off though was seeing Larry actually score with multiple women coupled with the over the top spy thriller action. I often found myself feeling like tonally this was closer to an Austin Powers game than a Leisure Suit Larry game. Another issue I had with the title is it really did its best to force in as much story as it could. You spend a few hours on the resort island looking for clues about Faith, and you eventually do find her, but discover she has amnesia. Thankfully, a raunchy parody of Tingle from The Legend of Zelda tells you about a fabled Cavern of Cosmic Cognition that will help someone unlock the truth about themselves. But in order to get into the cavern you have to find four special keystones that belonged to the four founding fathers of the islands, as well as finding the cave itself. I felt like the game was ramping up towards its ending by this point, but it just kept going, until you wind up joining a resistance to take down Prune and Wang’s army of sexbots.

There are definitely times when Wet Dreams Dry Twice feels like it’s going on longer than it needs to. The worst offender is near the end of the game when Larry must make his way through a randomized labyrinth. You’re given a map with illustrated instructions like “If you see a red barrel, don’t go south” or “If you hear a toilet flush, don’t go east” if you go through the wrong door, you just wind up back in the starting room and the labyrinth resets. To try and save time, I just took a picture of the map with my phone, but you end up having to go through this labyrinth four different times. At a certain point I just found myself saving my game in each room and loading if I got it wrong. I find that when an adventure game reaches a point where you find yourself save scumming just to make progress, it might not be the most well designed puzzle.

Overall, there is a lot to like about Wet Dreams Dry Twice. There are some great jokes, Jan Rabson continues to give a zany and likable performance as Larry Laffer even after all these years, the background locations continue to be vibrant and charming, and some of the puzzles are generally clever and will make you feel satisfied when you figure them out. However, the extreme length of the game, and a story that feels more like an action comedy flick rather than the failed romantic exploits of a lovable loser is a bit off-brand in places. It makes it difficult to say “If you love Leisure Suit Larry, you’ll love Wet Dreams Dry Twice” because I’m not so sure this game will appeal to diehard fans of the series because of how much was mixed up in this entry. If you enjoyed Wet Dreams Don’t Dry and want to get some closure on how that game ended, then Leisure Suit Larry: Wet Dreams Dry Twice may be a game for you. I will confess I had fun with it, and I appreciated some of what it did, but perhaps the shock value has just worn off a bit. I am curious what they might do if they ever attempt a Leisure Suit Larry: Wet Threems Don’t Dry.

Wet Dreams Dry Twice is an overall well crafted and funny point and click experience that suffers from some issues with padding and may surprise long time fans with its drastic change in tone.