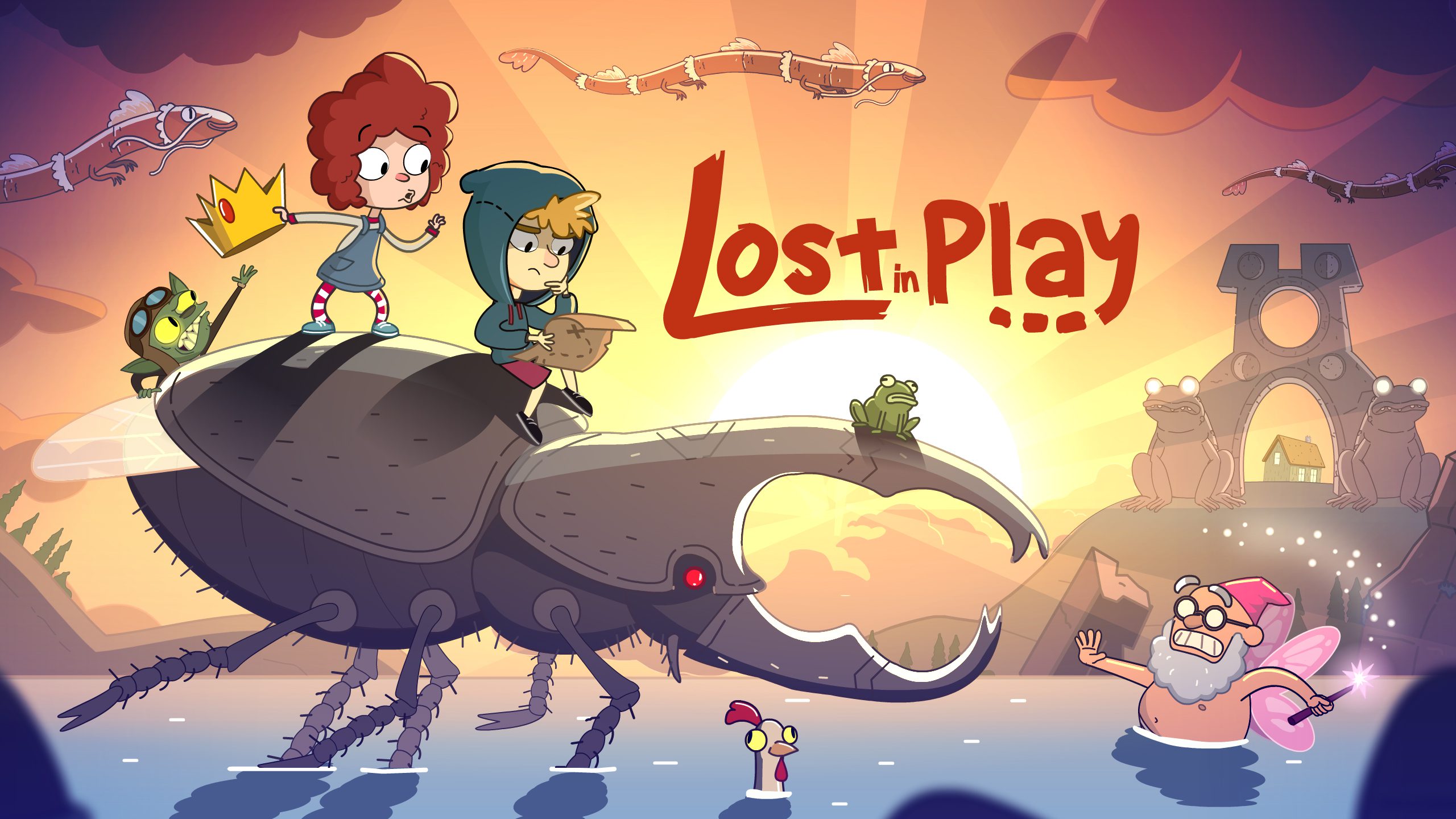 Lost in Play by Happy Juice Games is a whimsical wonderland where a brother and sister must escape the world of make-believe to get back home. If you are looking for a relaxing, silly, point and click puzzle adventure this game should be on top of your list.

As a point and click adventure, Lost in Play’s main gameplay involves walking around a scene and solving various puzzles. While there’s typically an overarching goal, like escaping the belly of a giant fish, the player soon finds a series of smaller puzzles they have to solve to reach the next scene. Some puzzles are merely fetching an item and giving it to the right person, while others can become entire mini game segments. There is a nice balance between world puzzles and separate mini games, with the mini games still feeling as part of the world and not a set of random actions. Nothing within the game is timed, allowing the player to thoroughly think through their next steps. Because you play as children trapped in a world of imagination, you must think creatively to solve the puzzles. Puzzles can be deceptively challenging, but it typically boils down to focusing on the right thing. The diversity of puzzles is well mixed, involving a series of sliding puzzles, mathematical movement puzzles, memory/password puzzles, and more.

Lost in Play is a game about how creative kids can be. If given the opportunity to explore and play, kids can create a world of their own, just from their imagination. Lost in Play explores the possibility of being trapped in a children’s creative fantasy. The game is set in a series of scenes that reflect each stop the children make on their journey back home. While the story isn’t complicated, it does include little callbacks to previous parts of the game, giving the story a fulfilling arc.

It’s difficult to find any faults in Lost in Play without nit-picking. While I had to use hints on some puzzles, the hints never gave the whole solution, so even though I had some help the puzzle still felt rewarding to finish. There were only a few times where I wanted to speed the gameplay along a little. Some scenes are wide and the player character’s walking pace is slow, so it took time traveling back and forth. Another tedious time was during the betting mini game when you had to wait for the computer to make a decision. It was also during this mini game where I found the only glitch where the info tutorial had trouble playing all the way through. Besides those few obstacles Lost in Play is well polished.

The art in Lost in Play is what makes it a wonderful game. Every bit of it is fully animated, with cutscene sequences feeling like you’re watching a short film. The cartoon art style allows the game to be absurd and unrealistic, like farting sheep or a fairy grandpa, or the frogs that slosh around the screen. The characters introduced to the player are something taken from children’s fantasy tales, and the art simulates it perfectly. There were some creatures in the cutscenes that were so interesting I wanted it to be another part of the game (but maybe it’ll be a part of a future sequel). As wild and imaginative as the scenes are, puzzles still make sense and tie into the story nicely.

One of the big features Lost in Play has is how much feedback it gives to the player’s interactions. The game has no need for words, as every explanation is accompanied by a short animation bubble. When being near an item to interact with and pressing the inventory button, the interaction image changes to the first item in the inventory, making it easy for the player to test different items in the world. I was thoroughly surprised that a point and click game would suggest a controller as its input scheme, but the quick toggle selection was the most intuitive on the controller.

The sounds in Lost in Play provided just as much feedback to the player as the art did. While most of the dialog is in a different language, how the words are phrased makes it obvious what their emotion is. My favorite dialog sounds were the goblins, as they spat their tongues at you through every other word. Because most of Lost in Play’s interactions were so well articulated, it can be obvious when a sound might have been missing. Luckily this only happened a few times and wasn’t terribly noticeable. The music reflected the mood of each scene effectively, and blended well within the atmosphere instead of sticking out like a sore thumb. When cutscenes happened, the music became the star of the show, breaking out to a singing chorus at one point.

In summary: Simple, understandable gameplay with unique and creative puzzles. An interesting little storyline that ties itself together at the end. Colorful, fully animated art that shows a childlike creativity, and music and sounds to tie the worlds together.

Lost in Play is one of those rare games that will bring joy to anyone who plays it. HappyJuice Games took every childhood fantasy and made them all come true.