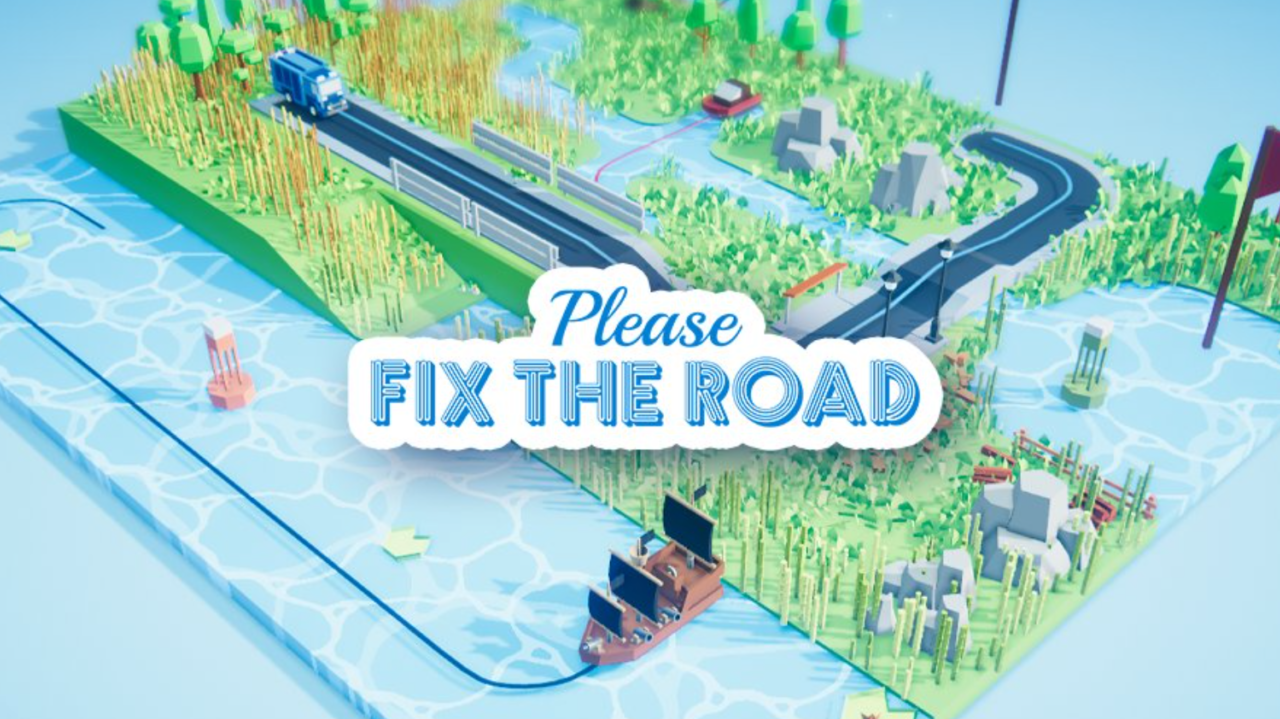 In Please Fix the Road (I’m going to shorten it to Fix for the review), the gameplay is described within the name. Reminiscent of sliding puzzles, your goal is to move around blocks to connect paths for objects to reach from the start to end. At the start of each round you are given a series of actions that you can perform to complete the task. Each action is sequential, meaning you can’t perform tasks out of order (as much as you’ll want to). In the beginning stages the puzzles are pretty simple (destroy a block, add a block, etc.), but throughout the game more ways to affect the blocks will be given to you (duplicate, move, rotate, oh my!) You may not be affecting one block at a time, either. You could affect the map in a series of different shapes, both large and small. There will come points where you get so overwhelmed, you’ll have to reluctantly press the hint button to get an idea of what to do.

Design-wise Fix is simple and straightforward. The tutorial is a little strange, by which I mean it forces you to do actions instead of just making them readable. I didn’t figure that out until after it wasn’t registering my inputs for a moment because it wanted me to click somewhere else. A little too heavy-handed in my opinion. If you get stuck on a puzzle you can skip to the next one and continue on. The main part of Fix isn’t about reaching the end, however, it’s solving all the puzzles. While the menu system is clean and navigation is clear, the whole game seems to be lacking something.

It’s a puzzle game. You solve the puzzles. What more do you want? Well, hmm, I’m not sure. Fix is good at presenting itself: it has nice transitions, you can zoom in and out and scroll around, even CTRL – Z works to undo actions. It all functions well. Perhaps I’m just missing context. Why am I fixing these roads? Am I a construction worker? Why are there animals as well? There’s no storyline or other motivation other than to just solve puzzles. That’s totally fine, though, I’m not digging on it if you want a good brain teaser. In terms of excitement, however, the levels start to feel boring and “samey” (and there’s 150 of them!) If we look at other games that consist of a singular puzzle mechanic, like Pipe Push Paradise or maybe even The Witness, there’s a light narrative that ties the puzzles together. Having a small narrative, achievements, or things to unlock besides the next level can also help motivate the player and make the game more interesting. The game already cycles through times in the day as well as the seasons, so why not group levels in a way that reflects that?

Now, for being a game full of content at the price it’s at, Fix is well worth the buy. While there is some monotony within the design of the game, if each level is compared by itself, the puzzles really shine. The aspect of Fix that makes it puzzling is the visualization of the outcome. I know I need to connect these paths so the cat can get to their home, but it just doesn’t seem possible. The game challenges you to question the tools in which you’re given. Yes, you have to do every step in the sequence, but sometimes you don’t use the tool to its full potential, or you purposefully destroy the work that you’ve done. There are moments where I can’t visualize what result my action will have, to which I have to click around and perform various steps before really seeing what my goals are. The rotation tool typically throws me off because I can’t visualize how the map will look if I move some tiles in a different orientation. The “eureka” moment is prevalent in each level. There were definitely times I facepalmed myself after realizing how simple the solution was.

It might be possible that the art assets were bought from a standard asset pack (hey, not everyone is an artist), but for a calm puzzle aesthetic, I think the low-poly graphics cater to it well. Each level feels cohesive like it’s cut from a larger map. Different seasons exist, as well as times of day. A negative thing I’d mention about the art choice is that some of the color palettes are intense. At one moment I’m relaxing in the cool nighttime, the other moment I’m squinting my eyes from the bright electric pink of the next level. Can be a little much, I’d say. The levels don’t follow a timeline either, so it jumps from random seasons and random times of the day. Talking about color; this game is not necessarily accessibility friendly. End marker flags and travel lines could be possible close colors. I had a frustrating time one level where I thought I completed it early, only to find out after checking the hints that I confused the black trail with the dark red (and I’m not even colorblind). Also a side note, all steps must be completed to finish a level. From what I’ve played each level is strictly linear and only has one way to solve it.

The music is nice and peaceful, with some recognizable covers here and there (mostly jazz standards). The music isn’t dynamic, however, and it kind of feels like a let-down when the scenery changes dramatically and the music stays the same. It’s just on a continuously looping playlist that loses its charm after a couple repeats. The sound effects fit the game’s light-hearted quirkiness and make actions feel crisp and snappy.

To summarize: simple mechanics and gameplay, where the challenge is knowing how your actions change the map. Puzzles can feel similar at some points, and without anything to really tie them together the motivation to keep playing starts to dwindle. Art is lighthearted and colorful and music is relaxing and upbeat to go along with the happy theme.

Jordan reviewed Please Fix the Road on PC with his own bought copy.

Please Fix the Road is a happy little game to occupy your time with. While the game can get dull at times, that just means it’s not something to play all in one sitting. So toss on that thinking cap (or traffic cone) and get those vehicles where they need to get going!