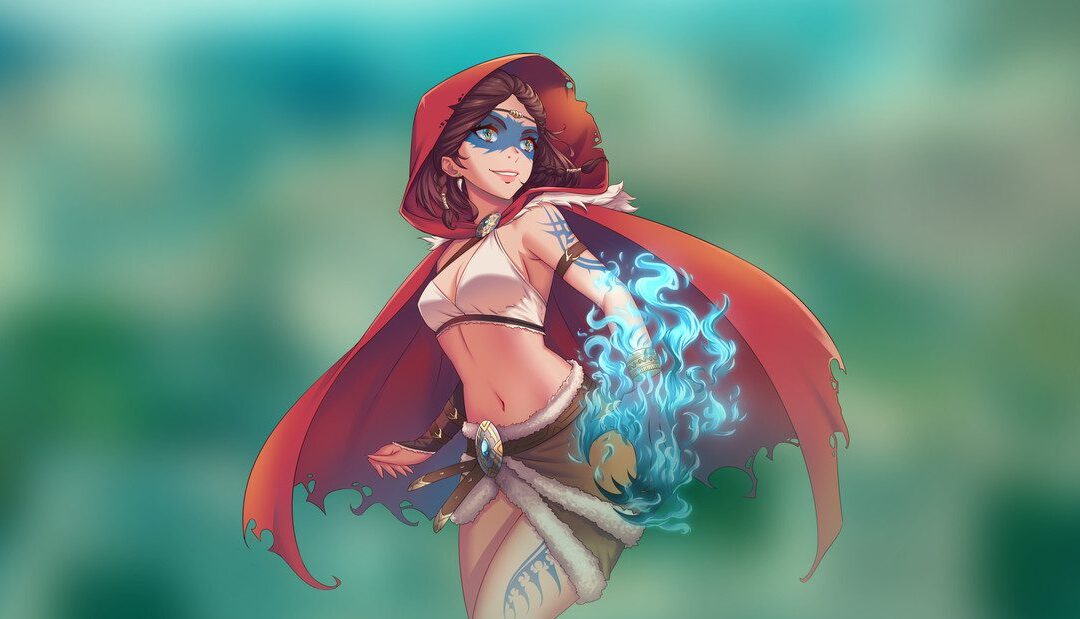 Zeus tricked other gods and goddesses of Greek mythology by transforming into other creatures, animals, and even inanimate objects. From satyrs, cows, ants, to even gold coins, he stops at nothing to seduce others. In Kamigami: Clash of the Gods, Zeus achieves his ultimate form; an anime girl. But unfortunately, the anime representation of mythical gods is the start and finish of the game’s charm.

Kamigami: Clash of the Gods, is a strategic trading card game inspired by different mythologies. Developed and published by Dream Studios, the game promises a rich story mode, ranked multiplayer, and no micro transactions for completing your collection, which is in itself a welcome feature in today’s gaming industry (looking at you Diablo Immortal). But let’s see if Kamigami: Clash of the Gods holds up to these promises.

The first thing that catches the eye in Kamigami: Clash of the Gods is the art. The anime interpretation of mythical gods is interesting, and for those who like these mythologies, seeing gods like Zeus, Loki, or Sekhmet depicted as anime girls with familiar elements can be pretty enjoyable. The art style is the most appealing aspect of Kamigami: Clash of the Gods, but unfortunately, there isn’t a solid game built around the artwork.

Even other visual aspects of Kamigami: Clash of the Gods pale in comparison. The UI specifically is terrible, which is unacceptable for a card game. Each card has six numbers that represent various features of the card, but there is no UI signifier that easily translates to attack value, hit points, mana cost, and so on. The numbers are just put into different-sized circles, and you have to learn what each number means. For single-player mode, you can turn on the tutorial when you’re looking at a card and try and see what each number means, but for a game that aims to have a competitive multiplayer, accessibility of information is crucial. Kamigami‘s UI is not designed with high-speed strategic gameplay in mind, although this is how it describes itself. The shortcoming of the UI design doesn’t stop here. The in-game chat box covers an excessive portion of the screen, there is no history bar to easily look at the previous cards and actions, the dialogue texts in story mode go outside the box and become unreadable. Menu transitions are unnecessarily long, and the sort button just doesn’t work while making and customizing a deck. The user interface in a card game is one of its most important aspects, but it is the most neglected aspect in Kamigami.

The sound design is also lacking in some aspects. The music and sound effects are ok, but they can get repetitive over time. The issue is that you can’t open up the settings of Kamigami: Clash of the Gods and change the menu while you are playing in the campaign. You have to go back to the main menu and turn the volume down. Even worst, some sound elements don’t turn down. In fact, if you turn both music and SFX to zero percent, there are still some sounds playing at maximum volume.

This reveals some issues in Kamigami: Clash of the Gods‘ client. The first issue of this being that I couldn’t take screenshots with the F12 key like every other game on Steam. I thought maybe the Steam overlay was turned off by default, but that was not the case. The game’s client is not compatible with the Steam overlay, and the only way for you to mute the game is to do it through your operating system’s sound settings. These are not issues that we expect to see in modern games. A user-friendly UI, a polished client, and customizable and accessible settings are the bare minimum of game design, and they are missing from Kamigami: Clash of the Gods.

I want to discuss the most appealing feature that Kamigami: Clash of the Gods advertises; No microtransactions. It is true, that you can’t buy packs in the game with real money, and the only way to collect cards is by playing it and spending the gold you gain by defeating enemies. But there is a major issue with this system, you can get duplicate cards, and there is no mechanic to disenchant or sell back the cards that you don’t need. Kamigami removes micro transactions from the game, but its free-to-play grind is somehow even worse than the most predatory card games in the market. Why shouldn’t we just unlock everything when we finish the campaign? What’s the reason for holding back collection behind hours of grinding?

This is not an improvement over pay-to-win games. The free-to-play grind in games such as Hearthstone or Magic: The Gathering Arena is there to compel players to spend money. It’s not the most consumer-friendly approach, but at least there’s a reason for it. When you remove the pay-to-win aspect from a game, you should also rework the systems that these games use for the sake of psychological manipulation. The fact that this system exists in Kamigami, is either a sign that a real-money shop will be added to the game later, or that it’s a considerable oversight of the design.

Looking past all these issues, the cards themselves are interesting. There are four realms, Greek, Egyptian, Norse, and Japanese. Each realm offers unique cards and mechanics. There are also five categories of cards that you can collect and play for each realm. God cards are basically your hero card and the one that is always on the board when you start a game. Creatures and Deities are minions that can move on the board and attack your opponent’s cards. Monuments are stationary cards that can’t attack but can have passive effects, and finally, Miracles that work like spells in other card games. Each card has three ranks. B, A, and S tier. The S-tier cards are stronger than lower-tier cards, and there is no way of upgrading a card to higher tiers. The only way for you to get S-tier cards is to open card packs and hope that you get them. I decided on the deck that I wanted to play pretty early in the campaign mode, but I still didn’t have all the cards in S-tier when I finished the campaign.

The game board is a 4×4 grid, with each player’s God card starting in opposing corners. You can spend devotions and play cards adjacent to your existing cards. All cards except monuments, can also spend devotion to move, attack, and activate their abilities. Kamigami: Clash of the Gods is finished when a player’s God is destroyed. The core gameplay can be fun, and it was the only reason that I kept playing and finished the story mode. Playing each card and action in the game spends a resource called Devotion. You generate devotion at the beginning of each of your turns, and each card generates a certain amount of devotion while on the battlefield. Your devotion persists between turns, so you can theoretically skip a turn the play a more powerful card later.

But there is a major flaw in this design. If you have a good opening hand and play powerful and cheap cards early on, you can snowball your opponent without really giving them a chance to fight back. The more board presence you have, the more devotion you can generate each turn, and you can easily prevent your opponent from having impactful plays. In most games, I could easily guess the outcome of the game in the first few turns, and just give up if I knew there wasn’t a chance for a comeback. This can really hurt the ranked multiplayer aspect of the game.

Trading card games are one of my favorite genres. I have spent thousands of hours in games like Hearthstone, MTG, Legends of Runeterra, and multitudes of indie card games. While I wasn’t able to play against other players in Kamigami since the game still wasn’t released, I can have an educated guess of what the multiplayer will look like based on my experience. In each game, players will excessively mulligan until they have a good opening hand, perhaps with the ridiculously overpowered Egyptian monument card that reduces the opponent’s devotion each turn, and the game will be decided by the third turn and the player who fell behind will just resign.

Kamigami: Clash of the Gods promises a lot. But not only does it fail on delivering on these promises, it even fails on basic levels of game design. The UI is not designed, rather everything has been put together in the most inconvenient way. The client has issues that the gaming industry has solved a few decades ago. And the core gameplay design cannot be balanced for a multiplayer game. There are maybe one or two hours of enjoyable content in the game, but they are presented in the worst way possible.

Nima played Kamigami: Clash of the Gods on PC with a preview key.