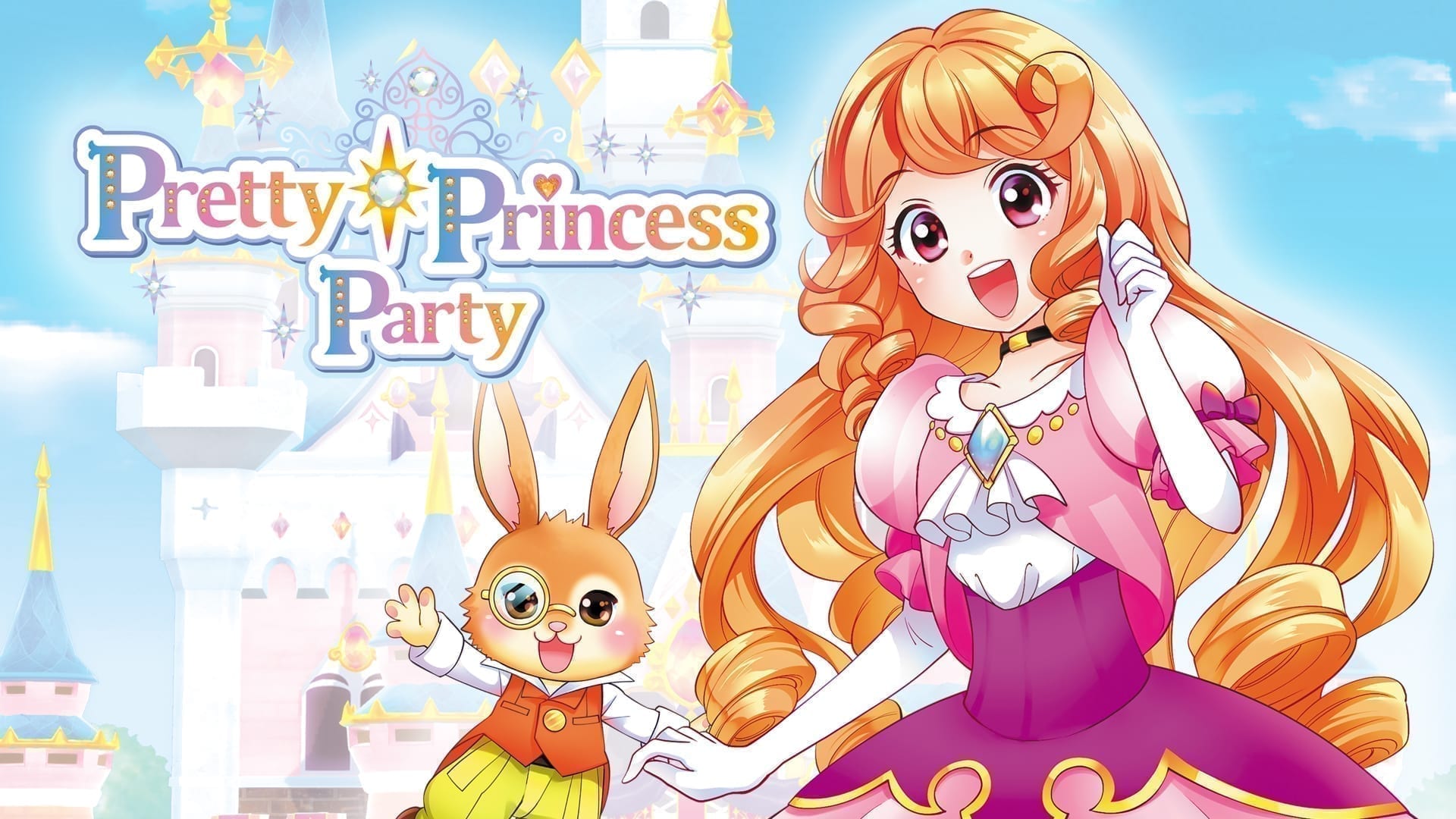 Video games are often about living out a specific fantasy. Many video games put us in the shoes of a noble hero or a hardened soldier. Some games like Animal Crossing just give us the fantasy of owning a house and being able to decorate it any way we want. And sometimes you just want to check out a bunch of dresses and become the prettiest princess at the party, which is easy to do thanks to Pretty Princess Party from Nippon Columbia.

This magical fairy tale of whimsy starts out with being able to design the princess of our dreams. Of course you don’t start out with many options, like you can’t even have black hair at the beginning, but you’ll unlock more soon enough. After making your princess (I named mine Strawbur. I wanted her to be called Strawburt, but you only get eight characters), you chase a small rabbit wearing clothes through a magical portal to a faraway kingdom.  Thanks to you being able to create a princess dress from a special bracelet, you’re given the title of Princess! The last Princess apparently left the kingdom and its inhabitants over 100 years ago, but thanks to all of the rabbits that still live here, and the three ghosts of former Princesses, you’ll return the kingdom to its proper glory by collecting special jewel stones.

The story is a bit crazy, but also mostly inconsequential. I appreciate that it’s there, and the dialogue is more or less fun and cute, but you’re probably not going to be playing this game for the rich lore. Basically the bracelet you wear grants you the power of design magic, which allows you to create clothes, hair, makeup, and most importantly, furniture out of thin air, provided you have the recipe for it. And this is where Pretty Princess Party’s main mechanic and end goal come into play. All the rooms in the castle are empty, and by filling them with furniture, the castle’s magic will be restored, allowing you to reach new areas of the castle itself, and eventually open the portal to take you back home.

Each room has five pieces of furniture that must be placed inside of it, and these are usually something broad like a table or some variety of clock. So long as it fits the criteria, you can pick whatever specific item you want. You can have a grand total of 100 pieces of furniture in any room, and the sky’s the limit, so long as you have those five things. For a couple of rooms, I definitely did the bare minimum, but some rooms you’ll have an idea and feel yourself being more creative. Going back to my opening example of Animal Crossing, Pretty Princess Party reminds me a lot of the Happy Home Designer spin-off they had for the 3DS. They give you the general instructions for how to decorate, but how detailed and creative you want to be is entirely up to you. I genuinely like this aspect of it.

The way you check what five items a room needs is by consulting a stone tablet in front of that room’s door, which thankfully you can also check while you’re in decorating mode. This acts as a nice checklist, but it brings me to one of my first complaints with Pretty Princess Party. In order to know what items are required, you must pay 100 Lumina, the game’s currency, to have one of the rabbits decipher the text for you. That would be fine except you can only have five texts being deciphered at a time, and they take thirty real time minutes to complete. You do have the option of paying another 100 Lumina to finish it instantly, but seeing that half hour timer really rubbed me the wrong way. It felt like something I’d see in a mobile title. However, one touch that I really like is that if you’re able to correctly guess what furniture is required, you might unlock it without having to decipher it at all. For example, when decorating the library I knew I had to add bookshelves, but on a whim I also added some tables and chairs, which ended up being exactly what I needed to complete the room.

To unlock new furniture and princess customization options, you’ll need to visit the knowledge fountain and pay Lumina to unlock the recipe. It’s a perfectly fine system, and more recipes will become available by increasing your three princess stats; cuteness, elegance and coolness. This brings me to another one of Pretty Princess Party’s bigger flaws. By playing mini-games, you’ll gain Lumina and experience in one of these three stats. Raising these stats unlocks new recipes for purchase and they can be purchased with the money you also earn from playing games. On paper this sounds like a really good system, but it soon falls apart in practice. For starters, there are only six mini-games in the entire game; two for each stat. To raise cuteness you can study or decorate cakes. To raise elegance you can create bouquets or take up ballroom dancing. And to raise coolness you can practice archery or ride horses. These games are all pretty fun (except horseback riding) and I legitimately enjoyed playing them. They remind me a lot of the mini-games from the old Pokémon Stadium titles. The problem is how many times you’ll have to play them to go up even a single level in a given stat, and how quickly the rooms will start to demand you have furniture only available at higher levels. Even playing these mini-games on the hardest difficulty rewards minimal experience. And for how much grinding you have to do, it would have been nice if the game included a Replay Game option instead of forcing you back to the castle between every round.

So much of Pretty Princess Party is a cute, relaxing and casual experience, but the ridiculous amount of mini-game grinding you have to do in order to make actual progress becomes quite daunting rather quickly. This wouldn’t be so bad if there were more variety in the games. As fun as I think the studying game is, having to play it five or six times in a row just to go up one level, when the stone tablet is telling me I need to go up three levels to unlock the recipe I need makes this supposed party become paltry sooner than later.

Pretty Princess Party is a game designed for younger kids (and 30-something game journalists who love cute things), so maybe they won’t be as bothered by the lengthy and repetitive nature of the game. Constantly being able to decorate rooms, as well as your princess is still lots of fun, and there are tons of furniture pieces to collect. It’s not a bad experience, but one that may have you feeling a bit frustrated if you’re not the target audience. Pretty Princess Party is the proverbial glass slipper and if it’s not a fit for you, then that’s okay. Because there is definitely an audience for this title.

Pretty Princess Party has some solid ideas, that is mostly held back by its restrictive and repetitive nature towards making actual progress. Fun for younger audiences, but may not hold attentions for very long.