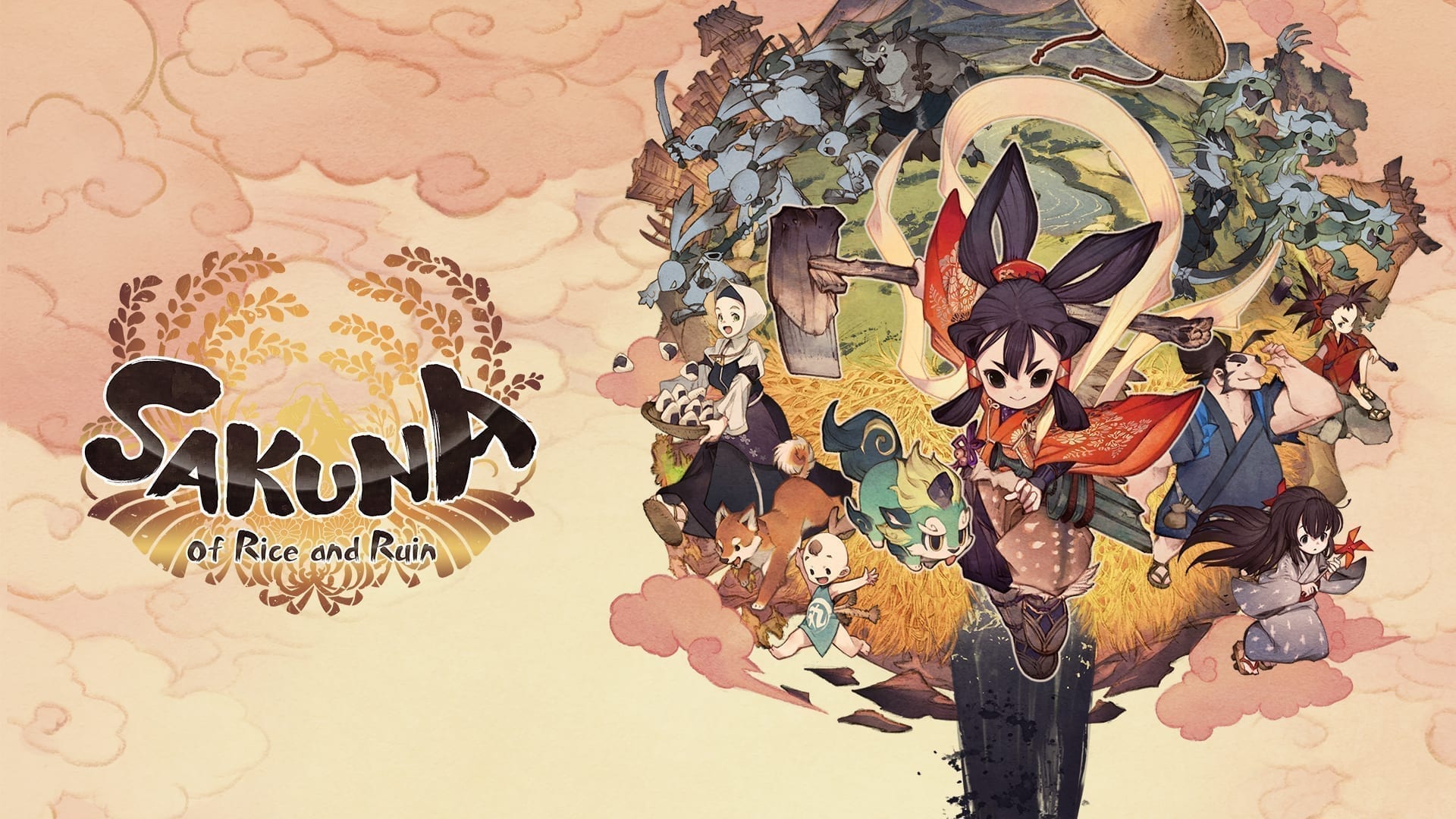 When I first saw a trailer for Sakuna: Of Rice and Ruin, I thought it was simply going to be a Harvest Moon style game set in feudal Japan. While this isn’t entirely accurate, it’s not a bad way to try and sell someone on the premise, as the full story has so much more meat on its bones than I originally anticipated. Sakuna: Of Rice and Ruin is a deeply engaging experience with a lot to offer right out the gate, and it all begins with the story.

The story starts out with a group of nomad humans who wander into the realm of the gods during a ceremonial offering. While trying to get rid of them, Sakuna, the child of a harvest goddess and warrior god, accidentally destroys an offering to the head goddess. She and the humans are banished to a land known as the Isle of Demons and must cleanse it before they can return. They’re able to move into an abandoned house that Sakuna’s mother once lived in, and to fend off starvation, Sakuna must utilize her inner harvest goddess and grow bountiful rice crops for them to survive.

The developers, Edelweiss, claimed that their goal was to make the rice harvesting as realistic as possible, and I’ll give them full credit for that. After playing Sakuna: Of Rice and Ruin, you might feel like you have at least some understanding of each and every step that goes into the process. Unlike Story of Seasons or Stardew Valley, Sakuna doesn’t just have you till the ground, plant the seeds, water them every day and then just pick a perfectly harvested crop after a few days. Of Rice and Ruin focuses on each and every hurdle that comes with growing rice, and a harvest will take you nearly an entire year to complete. Unlike other games of this genre, a month only consists of three days, so that isn’t as grueling as it sounds, but you’ve still got to keep an eye on things.

When planting your rice, make sure the sprouts aren’t too close or too far apart from each other. The game uses inverted controls when moving about the field to plant seeds and this may take a bit of getting used to. Thankfully around your second harvest you’ll unlock an ability that places a grid in your field that makes it much easier to have your seeds properly spaced out. Then you have to open a flood gate to allow water into your paddy field, but if you add in too much or it starts raining, there’s a separate gate to help drain it. As it grows it’s up to you to pick weeds and remove pests that might slow down your rice growth. At later stages you might need to add more water, you can get better rice by making your own fertilizer and eventually you can unlock animal companions to make the work easier. Cows can aid with tilling the field during the winter months, and ducks will eat bugs that would damage your rice, but at a certain point they’ll cause just as much damage and must be put away or turned into tonight’s dinner. Once it’s all done you’ll still need to cut down the rice stalks, hang them up to dry, thresh all the grains off the plant, and use a rice pounder to polish it, allowing you to make brown or white rice which each provide differing effects. Like I said, this game really does take you through the step by step process, and I’m not sure if it’s entirely accurate, but manages to balance being educational and fun at the same time.

One aspect of Sakuna that I greatly enjoyed was getting to know the human characters better. Aside from Sakuna you’ve got the gentle giant Tauemon, the hot headed boy Kinta, the fairly hard to read Yui, the babyish Kaimaru, and the motherly Myrthe. You’ll get to know these characters much more personally throughout the seasons, and they all have their own unique functions that they bring to the table. Myrthe handles most of the cooking, Kinta will help you forge new weapons, Yui opens a tailor to make new clothes, but all of these come with side quests that will be accomplished as you play. It not only brings you closer to each character to learn more about them, but expands your farm area and turns this run down abandoned shack into a place that starts to feel like home. You end each day by sitting around the fire and sharing a meal with everybody, and it’s hard not to become attached to all of these characters rather quickly.

Of course growing rice is just one side of Sakuna: Of Rice and Ruin, so now let’s take a look at the ruin half of things. Once you’ve taken care of your daily chores around the field, a good use of your time is to go explore the different areas of the island in order to get materials, ingredients, and open paths to new areas. While your farm is a fully explorable 3D landscape, the dungeons take the form of a 2D side scroller with fast and fluid combat against whatever demons come your way. Sakuna primarily has access to light attacks that can turn into combos or heavy attacks that are slower, but deal more damage. There are also special attacks that can be unlocked, and different styles of moves can be used depending on if you’re in the air, or what direction you’re holding the control stick.

But Sakuna’s unique battle mechanic is throwing her raiment long distances to explore or aid in combat by wrapping it around enemies. This can be incredibly useful for getting behind an enemy with a shield, nimbly dodging oncoming attacks or even just getting an enemy out of your way entirely. You can also use the raiment to explore, latching onto walls or ceilings to reach new areas. This addition is incredibly fun, and in a weird way it left me feeling like Spider-Man as I flew around levels by latching myself onto the ceiling. Overall, the combat in Sakuna: Of Rice and Ruin is pretty fun and has a lot more depth to it than it seems on the surface, especially once you start unlocking new moves and skills.

While Sakuna: Of Rice and Ruin does have RPG mechanics and ways to grow your stats, it won’t happen in the way that you would expect. Unlike most games, in Sakuna, you can fight all day every day and never see a single stat increase unless you collected enough crafting materials for Kinta to make you a new weapon. But that will only go so far. If you wanna make it in Of Rice and Ruin, you’ll need to increase your overall strength, your health and other stats, all of which is done on the rice growing side of things. After each harvest, your stats will increase depending on how well you did. While this does encourage players to put love and attention into their crops, it does make much of the fighting sections start to feel like repetitive busywork. It’s even worse if you went out looking for a specific item drop and couldn’t even find it. Nearly every area has special objectives like finding a hidden treasure or defeating a certain amount of enemies with a unique mechanic, and while these do come with some small rewards, I would’ve liked a bit more to keep me more invested in this side of things beyond just gathering.

Graphically, Sakuna: Of Rice and Ruin looks good. It has charming character and monster designs with a uniquely Japanese aesthetic that sort of reminds me of Okami, even if it’s not the same art style. Even when living on a farm in a land called the Isle of Demons, there’s a sense of peacefulness and beauty to what there is to discover. The developers clearly put a lot of love and attention into both sides of the game, especially the rice harvesting. They created something that feels somewhat familiar to fans of this genre, but still results in a very unique experience. It’s a definitely a game that will appeal more to a niche audience, but if you like agricultural games and side scrolling combat titles, Sakuna: Of Rice and Ruin may start to grow on you.

John reviewed Sakuna: Of Rice and Ruin on the Nintendo Switch with a personally purchased copy. The game is also available on PlayStation 4 and Steam.

Sakuna: Of Rice and Ruin
/
Full of Flavor!

Sakuna: Of Rice and Ruin is a very unique take on the farm building, life simulator genre seen in titles like Story of Seasons or Stardew Valley. It blends the rice farming mechanics and action RPG combat together to make an interesting dish.