As a child, I always wondered what it was like to be a cop. I believed that officers would help anyone in need, and getting the bad guy was a part of the job. Maturing, I came to realize that the thoughts of my pubescent mind were not entirely true. As gamers, we take on the roles of so many different things, but Beat Cop has found a way to make me see cop based video games in a different light, trying something unique and different giving each player a unique experience.

Beat cop places you in the shoes of Jack Kelley a former detective who was framed for murder. Kelley is demoted to being a police officer, where he has to patrol a specific area also referred to as a “Beat” (go figure) and this is where Beat Cop begins to define itself. In my time with the game I noticed that while the art style, and point and click mechanics of the game were easy to catch on to, it always felt like the developers made the game deceptively simple. This was proven to be right because Beat Cop is a game about choices that don’t show up immediately but the longer you play the more things will change. 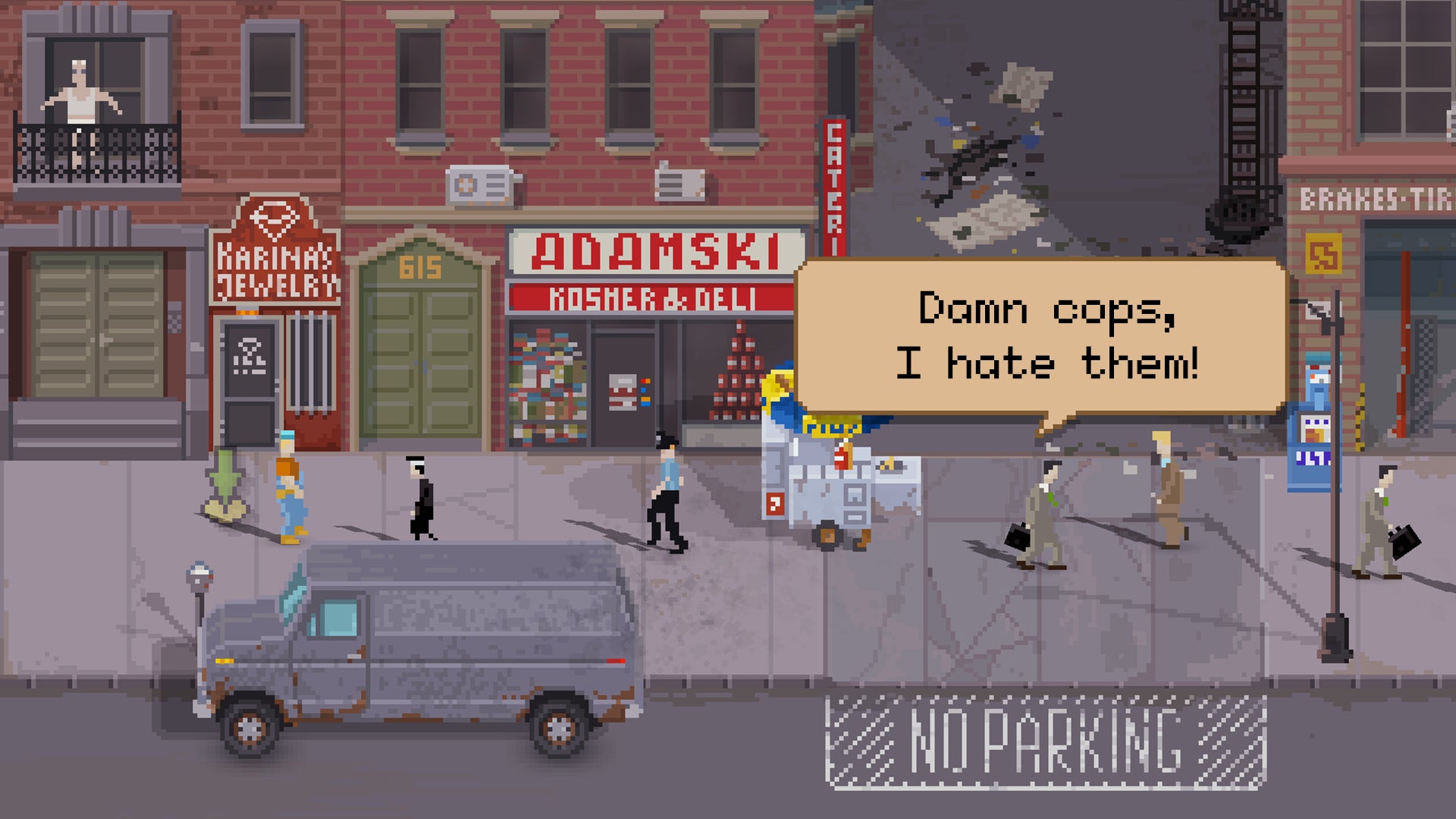 Beat Cop is inspired by those 80’s cop shows, and movies. Everything from black humour, an angry sergeant who curses a lot, and even the repetitive use of the phrase “Pig” each capturing a snap shot of the time it was inspired by.

Graphics have become part of the way we judge games. Triple A titles such as COD, Uncharted, Metal Gear, to name a few continually push graphics further, but when you look at Beat Cop, that level of detail is gone. I think it’s important to understand that while graphics can be nice, they should complement the game. The Pixel art style of the game goes amazing with all of the sounds in the background forcing the gamer to get out of the comfort zone to see things in a different way.

Imagine a busy New York street with people marching alongside the street, the noises from their conversations echo along the street. The game does an impressive job at implementing sound in subtle ways. I recall walking into the Moonwalk cafe for a complimentary breakfast, and in the background a football game was playing and I could hear the full commentary for the game. Attention to detail like this shows a lot of time went into making the game.

The game is played in day like episodes each containing its own situations and information vital to the mystery of who framed you. You start off at the precinct where the police sergeant will give you specific tasks to do followed by the witty banter of your fellow officers. Shortly after this you are placed on the streets where it is your job to uphold the law, at least that’s what I would say but for you this might be different.

Beat Cop explores the power of choices. Every task you are assigned corresponds to making a particular group of people like you. If you follow what your sergeant tells you to do then the police will like you more, if you stop some people from parking in front of the mafia’s pizza shop then they will like you more. There are more groups than the two mentioned above and while this may seem straightforward, what happens when you have a quota of 20 tickets to give out, but you're being called to break up a domestic abuse report with about 20 minutes left on your shift. This in essence is what Beat Cop is all about, making the hard decision that there isn’t a right or wrong answer to.

There are multiple things that are assigned to you in a day. You have the freedom to handle these situations any way that you see fit. I was assigned to give 10 tickets for parking violations, I could go down the street and see who parked in no parking zones or the cars parked in front of meters with no time left, or I could right the first 10 cars I saw with tickets just to get it out of the way. These choices, not only fall into your police duties but you could take bribes, run drugs for local gangs, or set up one of the mafias believed snitches so that something “bad” happens to him outside his apartment.

Beat Cop has the potential to be a game that changes the way that developers make games related to being a police officer. To some, that might be a very big statement to make for an Indie title, but from the build I played it was refreshing for me to play something that felt new. Beat Cop will be out in the 4th quarter of the year, allowing gamers to find their own path in this nonlinear game with multiple endings.

Five games that are great to play with your family