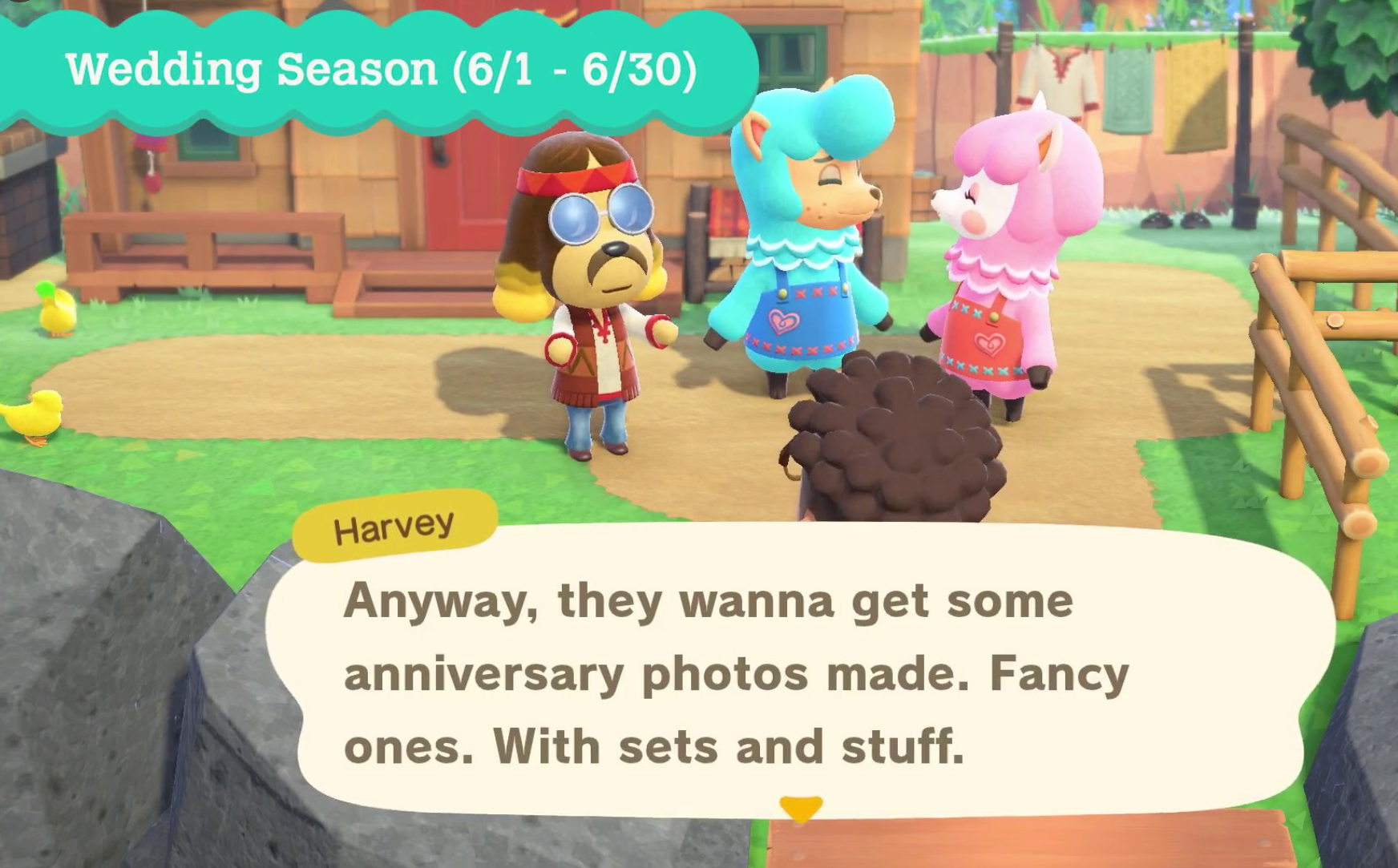 June is the month for weddings — or it would be if we weren’t all stuck in quarantine! However, there’s one place where the Wedding Season is still in full swing: the beautiful tropical island setting of Animal Crossing: New Horizons.

It’s been a few months since the adorable life simulator took the gaming world by storm, and the game remains at the top of the charts worldwide. Players are using New Horizons to escape from the stressful reality of the real world and instead enjoy fishing, decorating, collecting bugs, and socializing with adorable animal villagers.

Previous months’ events, including May’s Nature Day and especially April’s Bunny Day, quickly became the source of memes and humor on Web sites such as Twitter. Of course, Wedding Season is no exception, especially with players given so much freedom regarding how to celebrate.

What does Wedding Season entail, exactly? It starts with Harvey, the laid-back dog who owns his photography island, giving players a call with an assignment for them. Their task? To help adorable married pastel llamas (or are they alpacas?), Reese and Cyrus celebrate their anniversary by creating the perfect wedding-themed photoshoot.

Each day, Reese will request that the player set up a new and unique photo set. Harvey will give them access to an entire blank room, which can be decorated as desired. Players can complete this event up to 24 times, earning pieces of wedding furniture and clothing either as gifts from Reese or purchased via limited-time in-game currency called Heart Crystals.

Just a few of the rewards you can earn from this exciting event include:

Make sure to talk to Reese, Cyrus, and Harvey after each photoshoot, as different rewards are sometimes given out by different characters.

However, the ever-creative Animal Crossing: New Horizons player base quickly realized that they could use the event’s photo studio to create far more than just a series of adorable wedding scenes. Almost any item or piece of furniture which a player owns can be added to the set, whether or not it is considered wedding-appropriate. Players have taken to Twitter, Reddit, and other sites to show off their….certainly unique…creations.

For example, some people have decided that, instead of a wedding, Reese and Cyrus should celebrate a much grimmer event instead:

what happens after the wedding? #AnimalCrossing #ACNH #NintendoSwitch pic.twitter.com/gl2QSKUbc7

Others have decided to limit the event to only certain types of guests, such as gnome statues:

Still, others have flexed their creative muscles and treated the happy pair to a traditional Japanese wedding:

them: we want you to use the provided furniture– me: traditional japanese wedding? ok
(first pic is the nervous groom lol)#ACNH pic.twitter.com/qUCXAsy1cj

…or a ceremony that looks like it won’t end with exchanging rings, but instead tossing them into the fires of Mount Doom:

On a more heartwarming note, many players, including couples who are currently separated due to quarantine, are using the Wedding furniture and decorations to hold their nuptials on their island, with all of their friends in (virtual) attendance. Some pairs have even chosen to get legally married in Animal Crossing due to the current ban on large-scale gatherings around the world.

Wedding Season will be here until June 30, so make sure to snag the limited-time outfits and decorations before then!

How are you celebrating Wedding Season in Animal Crossing: New Horizons? Let us know!