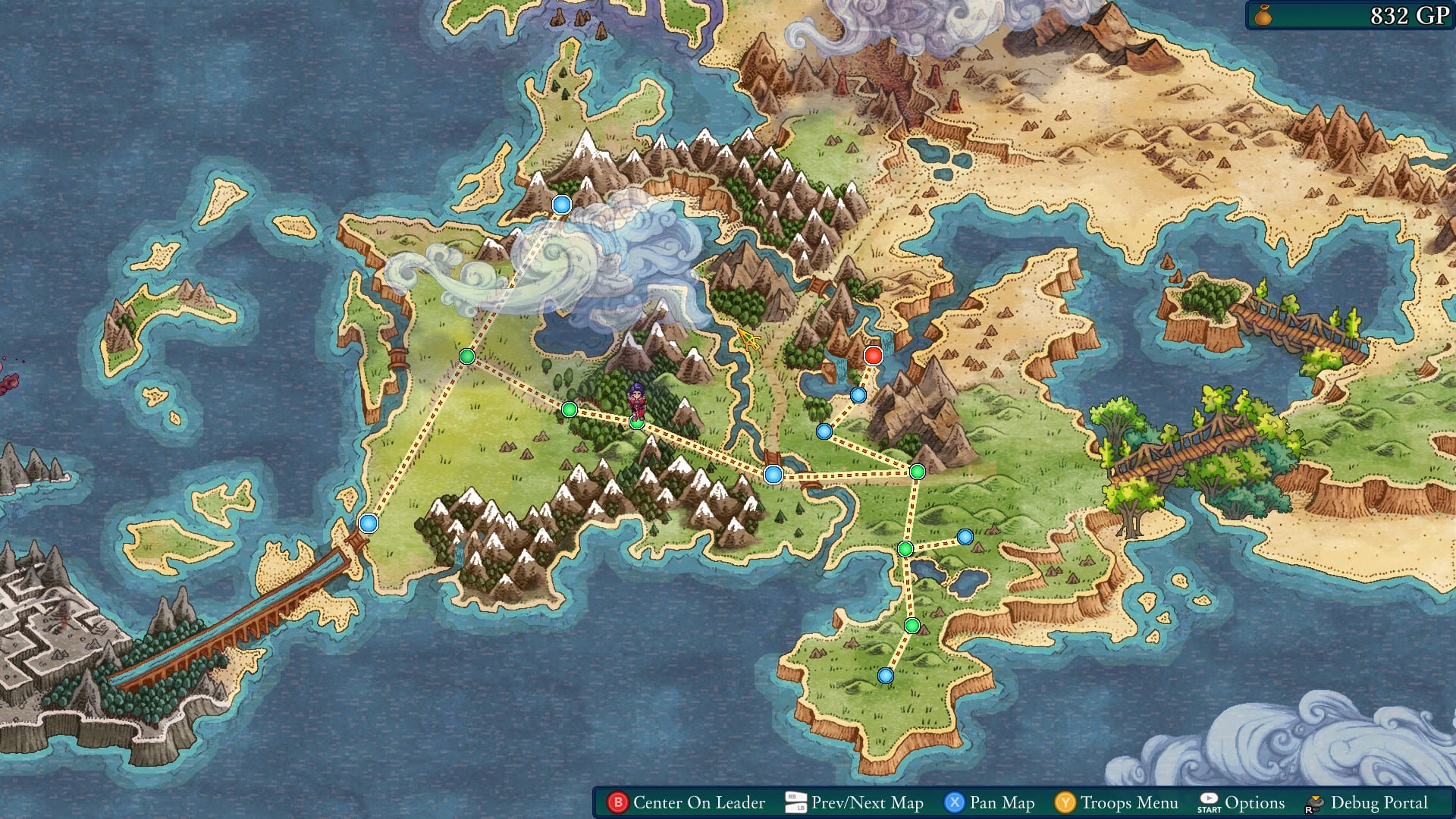 The tactical role-playing genre is one that I, admittedly, have little experience in. That’s why I saw Fell Seal: Arbiter’s Mark as a good opportunity to explore the genre further. Fell Seal can be an intimidating game for those unacquainted with TRPGs, but once you get a handle on the gameplay loop, the game starts to open up. Formulating different battle strategies with Fell Seal’s dozens of character classes has yet to be unsatisfying and only leaves me wanting more.

Fell Seal takes place in a fantasy land that feels like a mosaic of different fantasy realms, in a way that’s familiar yet different enough to feel fresh. There are a variety of monsters and humanoid creatures that each have their own mannerisms and battle styles. You’ll find everything from zombies, to bug-men, to giant unicorn-llama-deer. The world map and battlefields manifest in a beautiful hand-drawn art style, with small details like trees blowing in the wind, or a caterpillar atop a pole. These subtle touches add to the story-book feel that Fell Seal is going for, almost reminiscent of Bastion.

Powerful higher beings known as the Immortals rule over the land as their knights, the Arbiters, keep it free of evil. Time has passed since the Arbiters went to war against a great evil, and corruption has grown within the Arbiters’ ranks. A number of them have taken advantage of their position as law enforcers and put themselves above the law, committing murder and stealing at their will. On a fateful night, one of the remaining loyal Arbiters, Kyrie, along with her trainee, Anadine, witness a nobleman murdering someone in the streets of Gelligh. Their pursuit of this nobleman leads Kyrie and Anadine to a journey bigger than they could imagine.

Before you know it, Fell Seal tosses you into battle. During and between the course of the first few battles, Fell Seal unpacks how its various systems work. And boy, is there a lot to unload. You’re going spend a lot of time reading about the different classes, status effects, special attacks, battlefield-related instances… the list goes on. However, it’s far from insurmountable. Though it is a lot of reading up front, developer 6 Eyes Studio explains it all well enough, and in terms that anyone new to TRPGs can understand. Even with Fell Seal onboarding you with a lot of information at the beginning, a lot of the finer (and just as important) details of gameplay can be found in the Help Compendium found in the pause menu.

Anyone who has played the likes of Final Fantasy Tactics should be very comfortable here; Fell Seal is nearly identical in its gameplay in many ways. Whether it be the isometric grid that you move your character across, the way you can change classes, or simply how you alter which direction your character is facing at the end of each turn, muscle memory is sure to kick in for seasoned players.

Micro-managing, from what I can tell, is going to make up a good portion of your play time. Fell Seal makes it explicitly clear that you want to manage your troops after every battle. This is essential, as not having your characters equipped with the best weapons, armor and abilities can lead to a swift loss on the battlefield. Aside from the main characters, all of your troops are completely customizable. Any character can be any class, assuming they meet the level requirement. Equipment can be changed within the limit of a given class. Cosmetics can also be changed to any preference. You can stick with a class’ default outfit, or dress completely different all together.

Every class has its own skill tree full of useful abilities. Once you hit a certain level on the tree, you unlock an adjacent and more specialized class. And of course, you can change a character’s class at any time. Starting out, you have access to only the Mercenary and Mender classes. After going up a few levels, this quickly expands into a range of possibilities: Scoundrel, Knight, Templar, Peddler, Wizard, Plague Doctor… There are well over a dozen classes to to build your team with, each of them with a unique play-style.

I look forward to playing more Fell Seal as I work through it for my review. It’s a game that’s really taken a while to get its hooks in me, but now that I’m over the hump of learning how the systems work, I’m excited to jump back in.

GameLuster previewed Fell Seal: Arbiter’s Mark on Steam via a code provided by the developer.

When Collin isn't talking about working at a brewery in Seattle or worrying about grad school, he's throwing more games on to his backlog and looking at headphone equipment that's too expensive. Catch him on Tadaima: A Terrace House Podcast, talking about one of the most binge-worthy shows on Netflix.