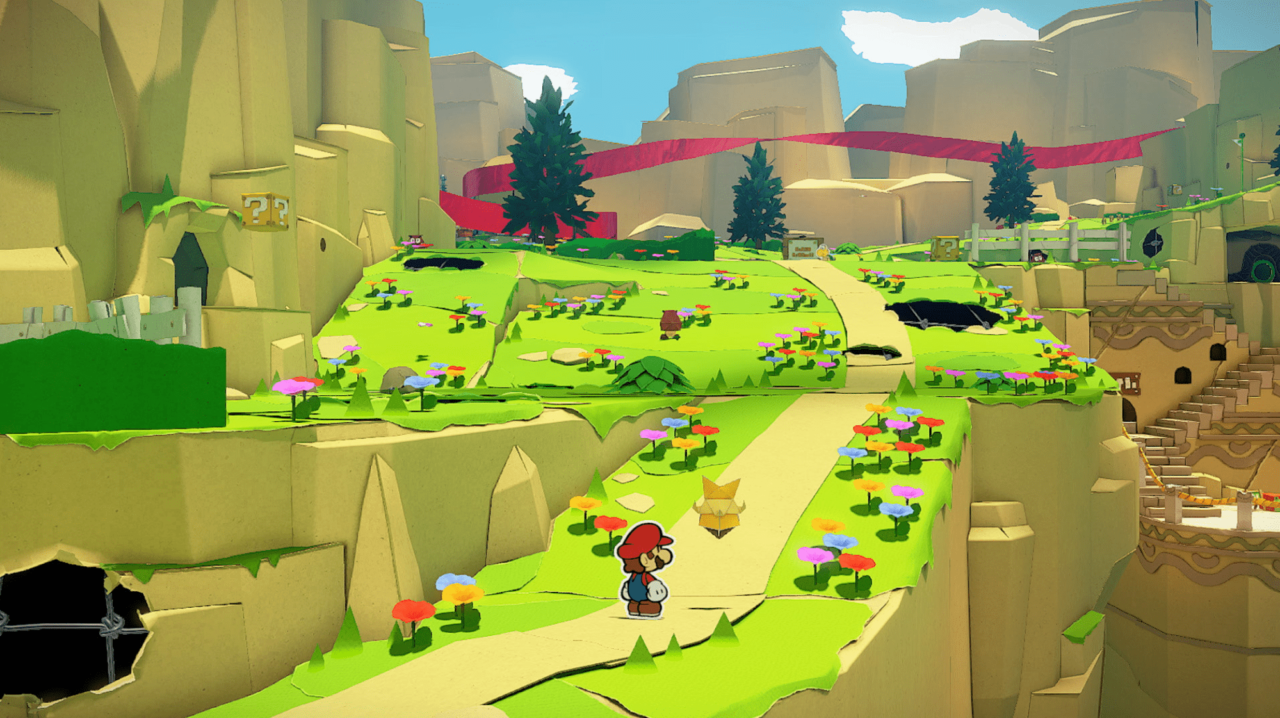 Paper Mario: The Origami King was only announced just a few weeks ago, but it’s quickly risen to become one of the most anticipated games of 2020. The latest entry in the popular action / RPG Paper Mario series, Origami King is the first entry in the series since 2016’s Color Splash, as well as the first to be released for the Nintendo Switch hybrid console.

The game’s producer and assistant producer Kensuke Tanabe and Risa Tabata (of Nintendo) and director Masahiko Nagaya (Intelligent Systems) sat down with Video Games Chronicle to discuss the process behind working with paper, designing brand new bosses and characters, and writing another story for iconic character Mario.

The team discussed their commitment to innovation and developing new ideas for each Paper Mario title. Tabata explained that they were inspired to do so by legendary game developer and director (and creator of the Mario series) Shigeru Miyamoto. She quoted a favorite saying of Miyamoto’s: “Challenge yourself to create new gameplay.”

In addition to the titular origami, The Origami King adds game mechanics involving confetti and folded, extendable arms. This is the fourth title in a row to introduce a new paper-based mechanic, following the ability to switch between 2D and 3D (Super Paper Mario), collecting stickers (Sticker Star) and decorating the world with paint (Color Splash). Tabata herself thought up the concept of origami, while Intelligent Systems added confetti.

When asked if they had built physical origami models of the Mario characters, Nagaya responded in the affirmative. He explained that it was a difficult but important process to create a look for each character which blends a realistic origami appearance with the need to move around and express themselves during the game.

Previously, the official Japanese Nintendo Twitter account had shared a video detailing the process of folding Princess Peach, who appears early in the game to inform Mario that she has been “suddenly transformed” into her new origami shape. Perhaps they will share how to make Mario and the game’s other characters in the future!

The team was also questioned regarding fan response to previous Paper Mario titles. The interviewer pointed out that Sticker Star and Color Splash were criticized for relying more heavily on action elements and being less RPG-like than the original Paper Mario and its sequel, Paper Mario: The Thousand-Year Door. While Tanabe acknowledged this criticism and confirmed that Nintendo was listening to fan concerns, he also clarified that Nintendo’s goal is making games which will appeal to both casual and die-hard gamers.

Said Tanabe of Origami King: “You’ll understand just how many ideas we’ve managed to pack into one game.” In particular, he highlighted the game’s puzzle-solving elements, explaining that players will have to carefully figure out the weaknesses of each of the game’s bosses in order to find the proper solution for defeating them. Casual gamers have no need to worry – Tanabe explained that Origami King will also feature a system in which players can use coins to receive hints from various Toad characters regarding each boss’s secrets.

One challenge which the Origami Team discussed in detail was creating captivating, attention-grabbing new characters which will debut in this title. Tanabe revealed a piece of information which has drawn quite the reaction from fans: ever since Sticker Star, the creative team behind Paper Mario is no longer allowed to “modify Mario characters or create original characters which touch on the Mario universe.” While fans of beloved characters such as Goombella the chatty Goomba or the Boo aristocrat Lady Bow might be disappointed, Paper Mario enthusiasts are quite excited to meet Olly, the titular Origami King, and his adorable sister Olivia, who will serve as a partner character for Mario during his adventure. Trailers have also hinted that Mario will travel alongside an energetic Bob-omb named Bobby.

Tanabe explained that the game’s story will combine comedy and adventure. He and his team have worked to create a simple yet gripping story which fans of all ages can enjoy. Origami King – which is the first Paper Mario title which can be played both at home and on the go  – will also take advantage of the Nintendo Switch’s unique hardware. While few details were provided, the producer did confirm that Mario’s new “1,000 Fold Arms” ability will make use of the Switch’s HD Rumble feature.

Finally, the team was asked for more details regarding a particularly interesting part of the game’s reveal trailer, in which Mario dons a helmet which appears to be inspired by the one worn by Metroid protagonist Samus. Nagaya explained that, in addition to origami, the game will also make use of other papercraft styles including papier-mache. Papier-mache was used to craft objects which were described as “dress-up masks for Mario to dress up and disguise himself.” The Intelligent Systems team member did confirm that other masks beyond the Metroid-themed one seen in the trailer will appear in the game. Additionally, the Metroid helmet will be referred to by the in-game name of “Space Warrior Mask”.

Paper Mario: The Origami King is now available for the Nintendo Switch.

Did this interview get you even more hyped for The Origami King? Are you planning on playing this latest Paper Mario title? Which elements – story, gameplay, combat or characters – are you most interested in seeing? Let us know!