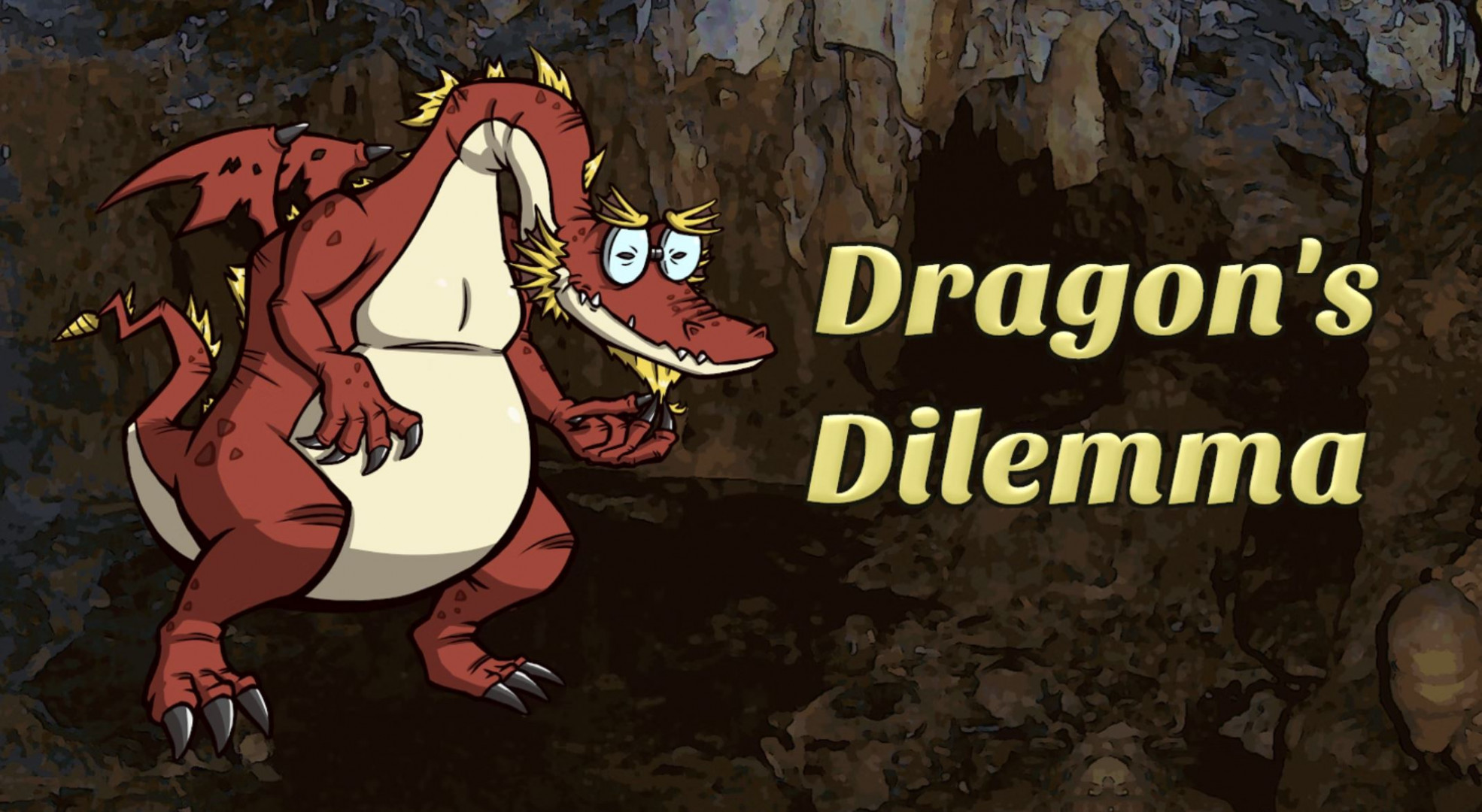 You are an elderly red dragon, content to live your life guarding your hoard in your cave – if only those darn adventurers would stop trying to kill you all the time! One day, you find out that someone has put out a quest calling for you to be killed, all because of some crown that you most definitely didn’t steal. So, in a subversion of the traditional fantasy tale, it is the dragon who sets out on the epic quest. His goal is simple: to find whoever put up the quest in the first place and convince them to take it down. The resources at his disposal: the art of diplomacy, a huge amount of gold from his hoard, and of course, the ability to breathe fire. Will the dragon succeed in ending the quest? Will he find fame, fortune, family, or perhaps even love along the way? In Dragon’s Dilemma, the answer depends entirely on your choices.

A humorous visual novel from developer/publisher Javissoft, Dragon’s Dilemma clearly draws inspiration from the classic “choose your own adventure” genre. Guiding the titular dragon – who you get to name – you must travel across the world to discover who put up the quest that disturbed your peace and quiet. Along the way, depending on your choices, you can befriend various traveling companions, go on dates, explore dungeons, fight pirates, participate in karaoke duels, and more.

Although it’s a fairly short game – with a single play-through taking approximately two hours to complete – Dragon’s Dilemma is surprisingly packed with fun story and (mostly) hilarious characters. It also features decent replayability, with multiple paths to take to reach the city where the quest originated from, multiple available women to romance, and even three secret endings that are quite tricky to find. Best of all, it has that most necessary function of all visual novels: the ability to skip through text you have previously read. Overall, Dragon’s Dilemma is quite the fun little treat which fans of the fantasy genre will likely enjoy.

Despite Dragon’s Dilemma billing itself as “a satirical visual novel,” the game’s strongest point is the genuinely heartwarming relationships the dragon can form with his traveling companions. He can become an adoptive father figure to a poor peasant boy who is mistreated by his parents (who you can also name – I personally called him Dimitri) or help Fiora, a girl who may or may not be a princess, find her true path in life. There are also several travelers to help along the way, ranging from merchants to goblins to the most hapless crew of adventurers you will ever meet. While the game’s multiple paths allow players to decide if they want to play as an angry, misanthropic dragon or a kind, helpful one, I found that the paths and scenarios resulting from being kind were much more fulfilling than those that came from cruelty and violence.

The game definitely markets humor as one of its major selling points, and I think it succeeds – for the most part. Those familiar with fantasy and its cliches will definitely enjoy the many  digs at the genre both obvious and subtle, such as mocking the arbitrary nature of quests or establishing that “Narrators” are a separate race of being who all look like grizzled old men and possess the ability to see beyond the fourth wall and address the audience directly. The date section is especially fun, as the dragon fails to realize that his potential dates are various other magical creatures such as a vampire or a centaur. Unfortunately, humor can be hit or miss, and there were a few points where I felt the joke didn’t land or went on for too long. The most noticeable example of this was Janet, a recurring character whose only purpose was to call the dragon a “useless sponge on society,” and wore out her welcome in what was only the first of many appearances.

The art style of Dragon’s Dilemma is colorful and cute, if a bit simplistic – I do especially love the design of the dragon himself, who is old and grumpy and wears spectacles, making quite the difference compared to the imposing, powerful dragons more frequently encountered in fantasy. The music was unfortunately one of the game’s weaker elements, as Dragon’s Dilemma features only a few tracks and they tend to get a little bit repetitive. However, I wouldn’t list either as a major negative point, as the visual novel is still an overall fun experience to play.

The only true weak point Dragon’s Dilemma suffers from is the handful of mini-games that are sometimes thrown in – for example, when the dragon has to fight pirates, is challenged to a battle or karaoke or darts, or has to quickly collect a bouquet of flowers out of a burning river for his date. These mini-games feature little variation, as most simply involve having to click the screen or press a button at the right time, and they don’t really add anything to the game. I honestly think that Dragon’s Dilemma could have worked better as a straight up visual novel focused on choices rather than feeling the need to add these small moments of interactivity that just felt like unnecessary padding.

Overall, Dragon’s Dilemma is a fun visual novel with a decent number of branching paths and available choices and endings. I think fantasy fans, humor fans, and gamers looking for a generally light-hearted, relaxing experience will genuinely enjoy playing this game. Personally, I thoroughly enjoyed becoming a grumpy dragon dad who was overly protective of his adorable artistic adopted son. If you are looking for some laughs or some surprising heartwarming moments, definitely give Dragon’s Dilemma a try!

Dragon's Dilemma is a laugh-out-loud visual novel that offers plenty of choices, paths and endings for players to explore. A genuinely heartwarming found family story is the unexpected gem sparkling in the heart of this glittering dragon hoard.