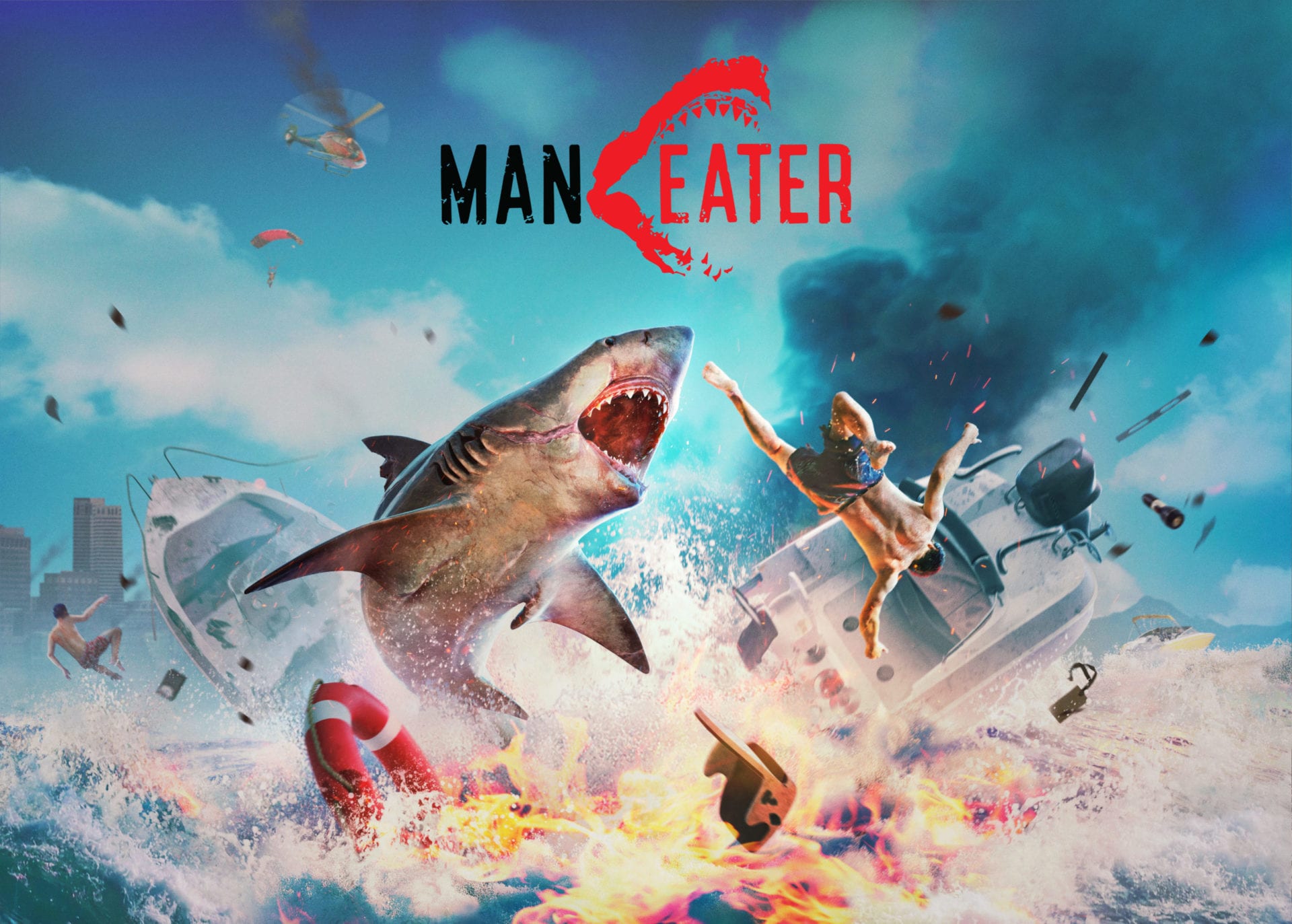 Video games are a great way to live out power fantasies. You can become the lone hero who saves the world from aliens, or step into the shoes of the chosen one to fight off evil dragons. But sometimes you might just want something a bit more primal and chaotic. Well, TripWire Interactive has delivered a perfectly bloodthirsty RPG where you take control of a growing bull shark in Maneater.

Maneater was first announced during the PC Gaming Show at E3 2018. The premise was a simple one; be a shark. And now that the game is out, I can say the team has crafted a fantastic shark simulation game, with fluid controls, and substantial RPG elements on top.

You start Maneater as a fully grown shark, and then get introduced to some of the main controls: swimming, biting, hitting stuff with your tail, and of course, eating enough people so they send boats after you – only to then destroy the boats and eat all the tasty people onboard. It’s a very satisfying tutorial that gets quickly pulled away from you when the shark you’re playing as is captured and killed by a Cajun fisherman named Scaly Pete. We learn the shark is pregnant when Pete rips the baby out, and cuts its fin so he can recognize it later. This newborn shark manages to bite off Pete’s hand before being thrown into the swamp, deciding then and there to take revenge on Scaly Pete.

Aside from this tragic backstory, there isn’t much more characterization to the shark, which is definitely a good thing. But what it all boils down to is simple; I just want to be a shark. And while it stinks to lose that feeling of power we had playing as the Mama Shark, Maneater uses this to bait the player by letting them know that this is what you can eventually become.

But for now we’re just a baby shark in a swamp, munching up whatever little turtles and groupers we can while swimming in fear from vicious alligators. Maneater is a game about growth, and the way the game progresses alongside that growth feels great, and works really well. As you eat, you’ll gain levels, and as you gain levels, your shark will grow in size from helpless baby, to boat sized megashark. Eating will also reward you with proteins, fats, and minerals that can enhance your shark’s equipment, like special sonar or increased healing from eating. The bigger you get and the more destruction you cause, you’ll be able to take your revenge on Scaly Pete. However, this Cajun fisherman isn’t going to go down without a fight.

Aside from the shark, the main “character” you’ll mostly hear from is the narrator of “Sharkhunters vs. Maneaters”, which is a reality TV show within the game. Scaly Pete isn’t just some random fisherman, he’s the star of this show, which perfectly captures the vibe of real-life equivalents like Deadliest Catch or River Monsters. The narrator is voiced by Chris Parnell (Rick and Morty, Archer, 30 Rock) and delivers some funny one-liners about the creatures you eat, or trivia about the coastal city you’re rampaging through. Some lines will get repeated, but there’s a nice variety to the comedian’s commentary that keeps things engaging even without actual characters to fill the space.

Speaking of characters, Maneater has this cool infamy system built in. When you eat humans, your threat level goes up. Once your threat level is high enough, hunters will start to come after you with guns and bombs. If you eat enough hunters, your infamy rank will rise and you’ll have to fight a special human character. I really like this idea, but I don’t think it lived up to its full potential. There is a short cutscene introducing them, but none of these characters talk and until you get to the really high level ones, they aren’t much tougher than normal hunters. I killed a bunch of them without even realizing it until the game rewarded me for doing so. I would have liked them fleshed out a little more, have the fights be more exciting, and maybe even give them some unique dialogue during the fight to goad the shark on.

However,  I definitely recommend taking on these fights, as that’s how you’ll get the bio-electric body parts for your shark, which were definitely my personal favorite in design and abilities. They let your shark send out electric currents whenever it bites or dodges out of the way of an enemy attack.

The city of Port Clovis is a fantastic setting. While, as a shark, you have to spend most of your time in the water, the city genuinely feels alive and is well designed. There are several specific areas ranging from high end vacation homes to touristy boardwalks. Most of these areas have a number of collectibles for you to find. Landmarks are special points, and are loaded with tongue-in-cheek references to everything from Spongebob Squarepants to Arrested Development, and collecting all these rewards players with the Shadow Shark parts.

Treasure Troves reward you with a lot of nutrients to quickly enhance your shark to its best, and license plates are often out of the way collectibles that will really test your mastery of the controls if you want to snag them all – though I do wish there was a more substantial reward for doing so. The city, its various areas, and even the mostly empty blue (and sometimes brown) water makes Port Clovis a very memorable place that I could honestly see myself going to for a vacation… once I know that shark attacks won’t be a problem.

One of my only criticisms is that Maneater tries to make itself seem longer by padding out its missions, and I just don’t think it needed to do that. I’m perfectly fine with a slightly shorter story campaign. Nearly every area has a type of mission called “population control”, which basically boils down to “Kill X amount of Y in this specific area.” These are fine missions, but you typically have to do these three times in each area with very little to differentiate them. There are also similar missions where you have to eat people instead of fish, and assassination missions where your goal is to take down a particularly tough version of the area’s local predators. Perhaps the best missions are when you’re thrown against an area’s apex predator, which is a uniquely designed, super strong version of the local wildlife. These act as Maneater’s boss battles and are a lot of fun as you have to know when to dodge enemy strikes and when to give them that one last bite before they hit you off.

Maneater also has a day and night system, but honestly I wish it didn’t. Playing during the nighttime sections wasn’t particularly fun. It was just dark. Normally when night time rolled around I’d just stay in whatever area I was in to collect nutrients and avoid making actual progress until daylight. I also wish the game had a mini-map, as it’s pretty easy to lose your bearings and get turned around when most of the stuff around you is just water. But at the end of the day, even with these minor complaints, Maneater consistently does one thing very well: it’s never not fun to be a shark. You may feel a little powerless at the beginning, but by the end of the game you’re taking down orca whales with lightning powers, and it always feels great.

The controls are great, the story is simple – but enjoyable – and the world is expansive with plenty of treasures to find. Maneater is the kind of high octane fun that I’ve been looking for. Combat is satisfying, and the story does just enough to keep you invested. Maneater is a game that assigned itself a mission to be a true shark experience, and it went above and beyond with that idea. Do not let yourself miss out on this experience.

John reviewed Maneater on PC with a code provided by the developer. The game is also available on PlayStation 4 and Xbox One. A Switch version has been announced for 2020.

Maneater is a fast paced, surprisingly in-depth shark based RPG with an expansive world and fantastic controls. The entire experience could be summed up in a single word: satisfying.